Draught And Classification of Draught

Draught is defined as the difference between absolute gas pressure at any point in a gas flow passage and the ambient (same elevation) atmospheric pressure.

Draught is defined as the difference between absolute gas pressure at any point in a gas flow passage and the ambient (same elevation) atmospheric pressure. . Draught is achieved by small pressure difference which causes the flow of air or gas to take place. It is measured in milimetre (mm) or water.

The purpose of draught is as follows:

The amount of fuel that can be burnt per square root of grate area depends upon the quantity of air circulated through fuel bed.

To remove the gaseous products of combustion. 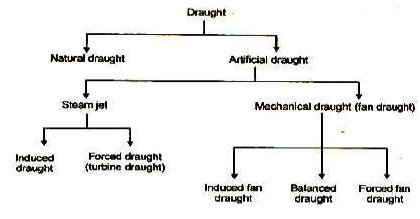 It employs steam to produce the draught

It employs fan or blowers to produce the draught.

The air is forced into system by a blower or steam jet.

Natural draught system employs a tall chimney as shown in figure. The chimney is a vertical tubular masonry structure or reinforced concrete. It is constructed for enclosing a column of exhaust gases to produce the draught. It discharges the gases high enough to prevent air pollution. The draught is produced by this tall chimney due to temperature difference of hot gases in the chimney and cold external air outside the chimney. 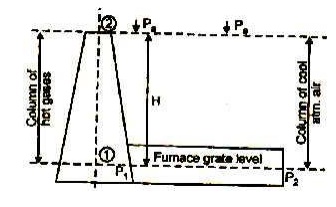 Today’srgelasteam power plants requiring 20 thousand tons of steam per hour would be impossible to run without the aid of draft fans. A chimney of an reasonable height would be incapable of developing enough draft to remove the tremendous volume of air and gases (400 × 10 3 m3 to 800 × 103 m3 per minutes). The further advantage of fans is to reduce the height of the chimney needed.

In a forced draught system, a blower is installed near the base of the boiler and air is forced to pass through the furnace, flues, economizer, air-preheater and to the stack.

The arrangement of the system is shown in figure. A stack or chimney is also in this system as shown in figure but its function is to discharge gases high in the atmosphere to prevent the contamination. It is not much significant for producing draught therefore height of the chimney may not be very much 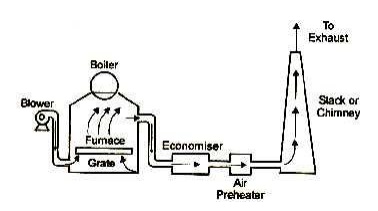 In this system, the blower is located near the base of the chimney instead of near the grate. The air is sucked in the system by reducing the pressure through the system below atmosphere. The induced draught fan sucks the burned gases from the furnace and the pressure inside the furnace is reduced below atmosphere and induces the atmospheric air to flow through the furnace. The action of the induced draught is similar to the action of the chimney. The draught produced is independent of the temperature of the hot gases therefore the gases may be discharged as cold as possible after recovering as much heat as possible in air-preheater and economizer. 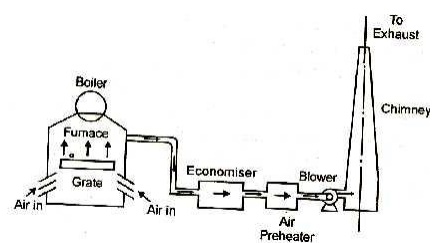 If the induced draught is used alone, then also furnace cannot be opened either for firing or inspection because the cold air will try to rush into the furnace as the pressure inside the furnace is below atmospheric pressure. This reduces the effective draught and dilutes the combustion.