This diagnostic category recognizes the variety of ways in which specific psychological or behavioral factors can adversely affect medical illnesses.

This diagnostic category recognizes the variety of ways in which specific psychological or behavioral factors can adversely affect medical illnesses. Such factors may contribute to the initiation or the exacerbation of the illness, interfere with treatment and reha-bilitation, or contribute to morbidity and mortality. Psychological factors may themselves constitute risks for medical diseases, or they may magnify the effects of nonpsychological risk factors. The effects may be mediated directly at a pathophysiological level (e.g., psychological stress inducing myocardial ischemia) or through the patient’s behavior (e.g., noncompliance).

The criteria in the Diagnostic and Statistical Manual of Mental Disorders, Fourth Edition (DSM-IV) includes situations in which psychological factors interfere with medical treatment, pose health risks, or cause stress-related pathophysiological changes. This diagnosis is structured in DSM-IV so that both the psycho-logical factor and the general medical condition are to be speci-fied. The psychological factor can be an Axis I or Axis II mental disorder (e.g., major depressive disorder aggravating coronary ar-tery disease), a psychological symptom (e.g., anxiety exacerbating asthma), a personality trait or coping style (e.g., type A behavior contributing to the development of coronary artery disease), mal-adaptive health behaviors (e.g., unsafe sex in a person with human immunodeficiency virus [HIV] infection), a stress-related physi-ological response (e.g., tension headache), or other unspecified psychological factors. The medical condition is noted on Axis III.

The subject of psychological factors affecting medical con-dition (PFAMC) has become the focus of intense research because of the illumination it may provide of basic disease mechanisms (e.g., psychoneuroimmunology) and because of the deep interest in improving both the outcomes and the efficiency of health care delivery. In epidemiological studies, several psychiatric disorders increase the likelihood of mortality especially depression, bipolar disorder, schizophrenia, and alcohol abuse or dependence. Psy-chiatric disorders or symptoms in patients with medical illness may increase their use of health care services, particularly the length of costly hospital stays. Interest has been further increased by intervention trials aimed at psychological factors or disorders that have demonstrated improvements in medical outcomes and in quality of life in patients with serious medical disorders.

It should be evident that this diagnosis is not really a dis-crete diagnostic category but rather a label for the interactive effects of psyche on soma. Mind–body interactions have long been a focus of interest, both in health and in disease. Psychiatric 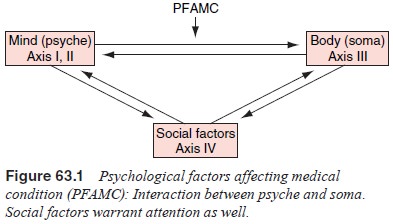 illness and medical disease frequently coexist. Psychiatrists and investigators of past eras were misled by this frequent comor-bidity into premature conclusions that the psychological factors were preeminent in the causation of the medical disorders, and these were designated psychosomatic. A more modern approach has been to recognize that all medical illnesses are potentially affected by many different factors in the biological, psychologi-cal and social realms. The earlier designation of certain disor-ders as psychosomatic (e.g., peptic ulcer disease) overvalued the contribution of psychological factors to those disorders and undervalued their contribution to other medical disorders (e.g., cancer). Furthermore, whereas labeling medical illnesses as psy-chosomatic drew attention to the importance of mind–body in-teractions, it unfortunately and falsely implied to many patients and physicians that the illness was basically psychogenic, that the symptoms were not “real”, and that the illness was somehow the patient’s fault.

The diagnosis of PFAMC focuses attention on one causal direction in the interactions between psyche and soma, that is, the effects of psychological factors on the medical condition (Figure 63.1). This represents a heuristic simplification, high-lighting a particular process for further exploration, understand-ing, and intervention. In most patients, there are effects in the other direction as well (i.e., the effects of general medical illness on psychological function). Furthermore, both mind and body in-teract with social and environmental factors both dramatic (e.g., poverty, racism, war) and more subtle (e.g., employment status, neighborhood), that affect the incidence and outcome of medical illness. Diagnosing PFAMC may help psychiatrist and patient ad-dress an important dimension of care, but the other “arrows” of Figure 63.1 often warrant attention too.