Because this diagnosis describes a variety of possible interac-tions between the full range of psychiatric disorders (as well as symptoms and behaviors) on the one hand and the complete range of medical diseases on the other, it is impossible to estimate over-all rates of prevalence or incidence.

Because this diagnosis describes a variety of possible interac-tions between the full range of psychiatric disorders (as well as symptoms and behaviors) on the one hand and the complete range of medical diseases on the other, it is impossible to estimate over-all rates of prevalence or incidence. We can start, however, by noting how frequently medical and psychiatric disorders coexist. Psychiatric problems are common in medical patients, although the measured frequency varies, depending on the criteria and method of measurement used. A reasonable estimate is that 25 to 30% of medical outpatients and 40 to 50% of general medi-cal inpatients have diagnosable psychiatric disorders (Table 63.1). Most common in medical outpatients are depression, anxiety and substance abuse; medical inpatients most often have cogni- 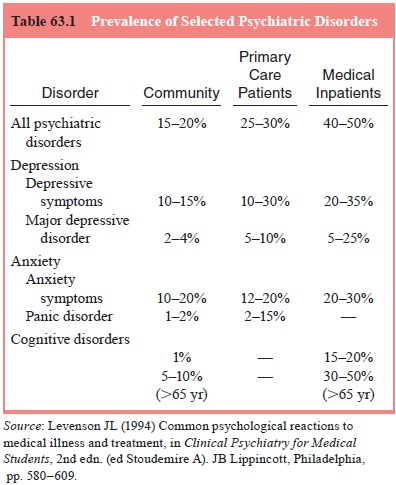 tive impairment (delirium, dementia), depression and substance abuse. Depression, both as a diagnosis and as a symptom, has been better studied in the medically ill than any other psychiatric syndrome. Major depressive disorder occurs in 18 to 25% of pa-tients with serious coronary disease, in 25% of those with cancer, and at three times the normal rate in diabetic patients. Individu-als presenting with symptoms of chronic fatigue have a 50 to 75% lifetime prevalence of major depression.

Nonpsychiatric physicians under diagnose and under treat psychiatric disorders in the medically ill. Medical disorders are also common in patients seen for mental health treatment, and mental health specialists often under recognize the presence and significance of coexisting medical disorders. Regardless of whether the patient has come seeking medical care or men-tal health care, medical and psychiatric problems are often both present. Such coincidence by itself is not sufficient for the diag-nosis of PFAMC. In some cases, the illnesses may coexist with little effect on each other; in other cases, the effects of the medi-cal illness on the psychiatric condition may be more important. The diagnosis of PFAMC in DSM-IV is reserved for patients in whom psychological factors adversely affect a medical condition in a specifiable way.

Given the wide range of psychiatric disorders and psychological factors that may affect medical illness and the large number of different medical disorders that may be influenced, there are no general rules about the course of the PFAMC interaction. Psy-chological factors may have minor or major effects at a particular point or throughout the course of a medical illness. We do know in general that patients with medical disorders who also have significant psychological symptoms have poorer outcomes and higher medical care costs than those patients with the same med-ical disorders but without psychological distress. A number of studies now document that psychological or psychiatric problems (particularly cognitive disorder, depression and anxiety) in gen-eral medical inpatients are associated with significant increases in length of hospital stay. Psychosocial interventions have been able to improve outcomes in medical illness, sometimes with an attendant savings in health care costs.