Psychoanalytic theory supports the notion that all human behavior is caused and can be explained (deterministic theory).

Sigmund Freud: The Father of Psychoanalysis 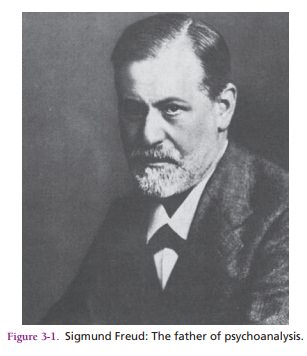 Psychoanalytic theory supports the notion that all human behavior is caused and can be explained (deterministic theory). Freud believed that repressed (driven from conscious awareness) sexual impulses and desires motivate much human behavior. He developed his initial ideas and explanations of human behavior from his expe-riences with a few clients, all of them women who dis-played unusual behaviors such as disturbances of sight and speech, inability to eat, and paralysis of limbs. These symptoms had no physiological basis, so Freud considered them to be the “hysterical” or neurotic behavior of women. After several years of working with these women, Freud concluded that many of their problems resulted from

childhood trauma or failure to complete tasks of psycho-sexual development. These women repressed their unmet needs and sexual feelings as well as traumatic events. The “hysterical” or neurotic behaviors resulted from these unresolved conflicts.

Personality Components: Id, Ego, and Superego. Freud con-ceptualized personality structure as having three compo-nents: id, ego, and superego (Freud, 1923/1962). The id is the part of one’s nature that reflects basic or innate desires such as pleasure-seeking behavior, aggression, and sexual impulses. The id seeks instant gratification, causes impul-sive unthinking behavior, and has no regard for rules or social convention. The superego is the part of a person’s nature that reflects moral and ethical concepts, values, and parental and social expectations; therefore, it is in direct opposition to the id. The third component, the ego, is the balancing or mediating force between the id and the super-ego. The ego represents mature and adaptive behavior that allows a person to function successfully in the world. Freud believed that anxiety resulted from the ego’s at-tempts to balance the impulsive instincts of the id with the stringent rules of the superego. The accompanying draw-ing demonstrates the relationship of these personality structures. 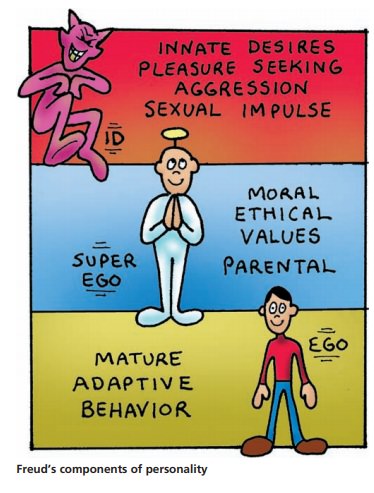 Freud believed that the human personality functions at three levels of awareness: conscious, preconscious, and unconscious (Freud, 1923/1962). Conscious refers to the perceptions, thoughts, and emotions that exist in the per-son’s awareness, such as being aware of happy feelings or thinking about a loved one. Preconscious thoughts and emotions are not currently in the person’s awareness, buthe or she can recall them with some effort—for example, an adult remembering what he or she did, thought, or felt as a child. The unconscious is the realm of thoughts and feelings that motivate a person even though he or she is totally unaware of them. This realm includes most defense mechanisms (see discussion to follow) and some instinc-tual drives or motivations. According to Freud’s theories, the person represses into the unconscious the memory of traumatic events that are too painful to remember.

Freud believed that much of what we do and say is motivated by our subconscious thoughts or feelings (those in the preconscious or unconscious level of awareness). A Freudian slip is a term we commonly use to describe slips of the tongue—for example, saying “You look portly today” to an overweight friend instead of “You look pretty today.” Freud believed these slips are not accidents or coincidences but rather are indications of subconscious feelings or thoughts that accidentally emerge in casual day-to-day conversation.

Freud’s Dream Analysis. Freud believed that a person’s dreams reflect his or her subconscious and have signifi-cant meaning, although sometimes the meaning is hidden or symbolic. Dream analysis, a primary technique used in psychoanalysis, involves discussing a client’s dreams to discover their true meaning and significance. For example, a client might report having recurrent frightening dreams about snakes chasing her. Freud’s interpretation might be that the woman fears intimacy with men; he would view the snake as a phallic symbol, representing the penis.

Another method used to gain access to subconscious thoughts and feelings is free association, in which the therapist tries to uncover the client’s true thoughts and feelings by saying a word and asking the client to respond quickly with the first thing that comes to mind. Freud believed that such quick responses would be likely to uncover subconscious or repressed thoughts or feelings. 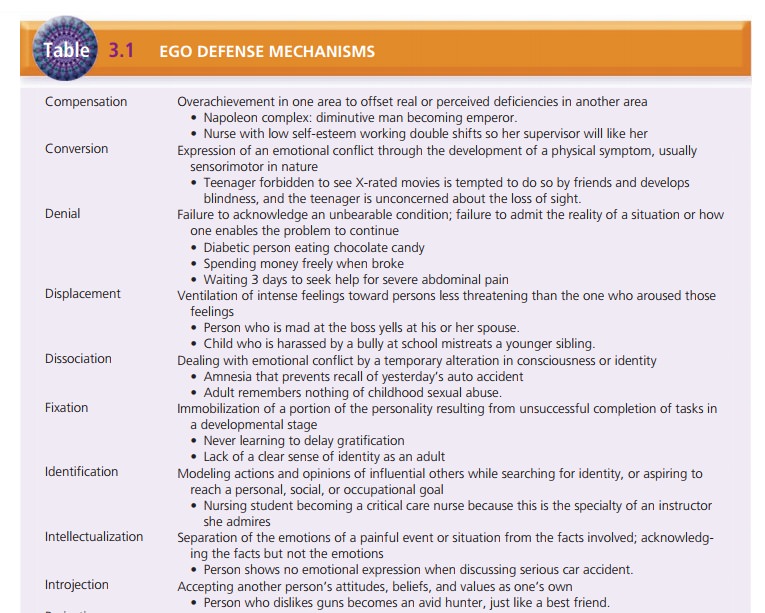 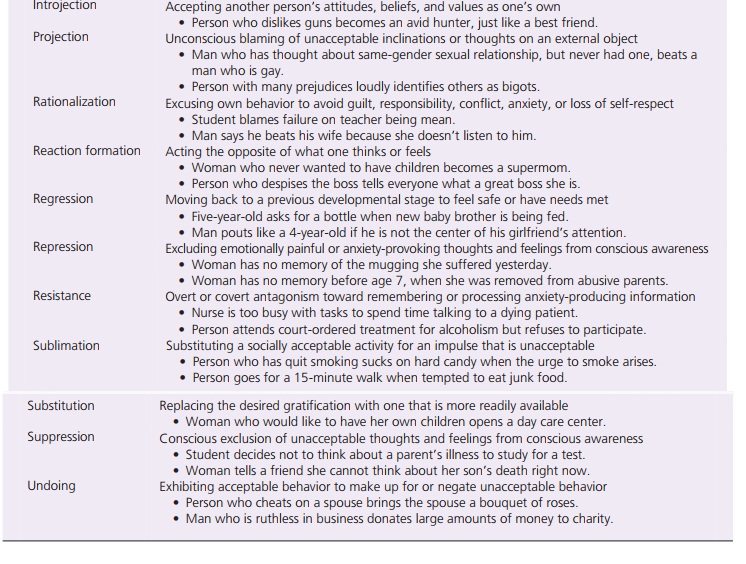 Five Stages of Psychosexual Development. Freud based his theory of childhood development on the belief that sexual energy, termed libido, was the driving force of human behavior. He proposed that children progress through five stages of psychosexual development: oral (birth to 18 months), anal (18 to 36 months), phallic/oedipal (3 to 5 years), latency (5 to 11 or 13 years), and genital (11 to 13 years). Table 3.2 describes these stages and the accompanying developmental tasks. Psychopathology results when a person has difficulty making the transition from one stage to the next or when a person remains stalled at a particular stage or regresses to an earlier stage. Freud’s open discussion of sexual impulses, particularly in chil-dren, was considered shocking for his time (Freud, 1923/1962). 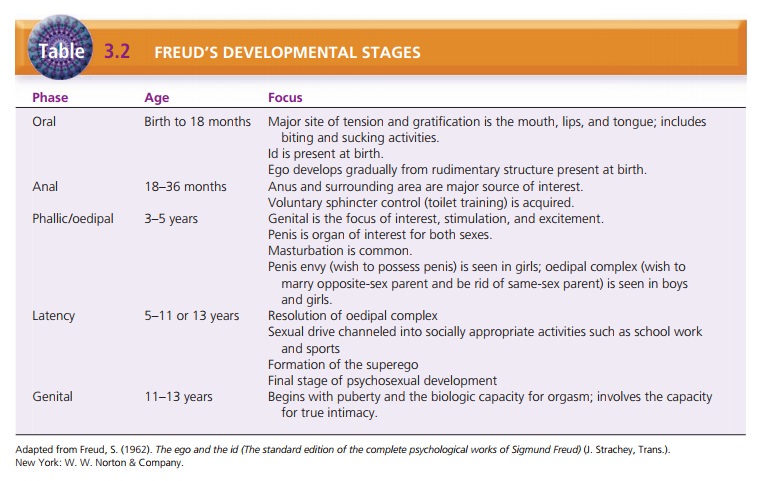 Transference and Countertransference. Freud developed the concepts of transference and countertransference. Transference occurs when the client displaces onto the therapist attitudes and feelings that the client originally experienced in other relationships (Freud, 1923/1962). Transference patterns are automatic and unconscious in the therapeutic relationship. For example, an adolescent female client working with a nurse who is about the same age as the teen’s parents might react to the nurse like she reacts to her parents. She might experience intense feel-ings of rebellion or make sarcastic remarks; these reactions are actually based on her experiences with her parents, not the nurse.

Countertransference occurs when the therapist dis-places onto the client attitudes or feelings from his or her past. For example, a female nurse who has teenage chil-dren and who is experiencing extreme frustration with an adolescent client may respond by adopting a parental or chastising tone. The nurse is countertransfering her own attitudes and feelings toward her children onto the client. Nurses can deal with countertransference by examining their own feelings and responses, using self-awareness, and talking with colleagues.

Psychoanalysis focuses on discovering the causes of the client’s unconscious and repressed thoughts, feelings, and conflicts believed to cause anxiety and on helping the cli-ent to gain insight into and resolve these conflicts and anxieties. The analytic therapist uses the techniques of free association, dream analysis, and interpretation of behavior.

Psychoanalysis is still practiced today but on a very limited basis. Analysis is lengthy, with weekly or more frequent sessions for several years. It is costly and not covered by conventional health insurance programs; thus, it has become known as “therapy for the wealthy.”