Harry Stack Sullivan (1892–1949) was an American psy-chiatrist who extended the theory of personalitydevelopment to include the significance of interpersonal relationships. Sullivan believed that one’s personality involves more than individual characteristics, particularly how one interacts with others. He thought that inadequate or nonsatisfying relationships produce anxiety, which he saw as the basis for all emotional problems (Sullivan, 1953). The importance and significance of interpersonal relationships in one’s life is probably Sullivan’s greatest contribution to the field of mental health.

Five Life Stages. Sullivan established five life stages of development—infancy, childhood, juvenile, preadoles-cence, and adolescence, each focusing on various interper-sonal relationships (Table 3.4). He also described three developmental cognitive modes of experience and believed that mental disorders are related to the persistence of one of the early modes. The prototaxic mode, characteristic of infancy and childhood, involves brief, unconnected experi-ences that have no relationship to one another. Adults with schizophrenia exhibit persistent prototaxic experiences. The parataxic mode begins in early childhood as the child begins to connect experiences in sequence. The child maynot make logical sense of the experiences and may see them as coincidence or chance events. The child seeks to relieve anxiety by repeating familiar experiences, although he or she may not understand what he or she is doing. Sullivan explained paranoid ideas and slips of the tongue as a per-son operating in the parataxic mode. In the syntaxic mode, which begins to appear in school-aged children and be-comes more predominant in preadolescence, the person begins to perceive himself or herself and the world within the context of the environment and can analyze experi-ences in a variety of settings. Maturity may be defined as predominance of the syntaxic mode (Sullivan, 1953). 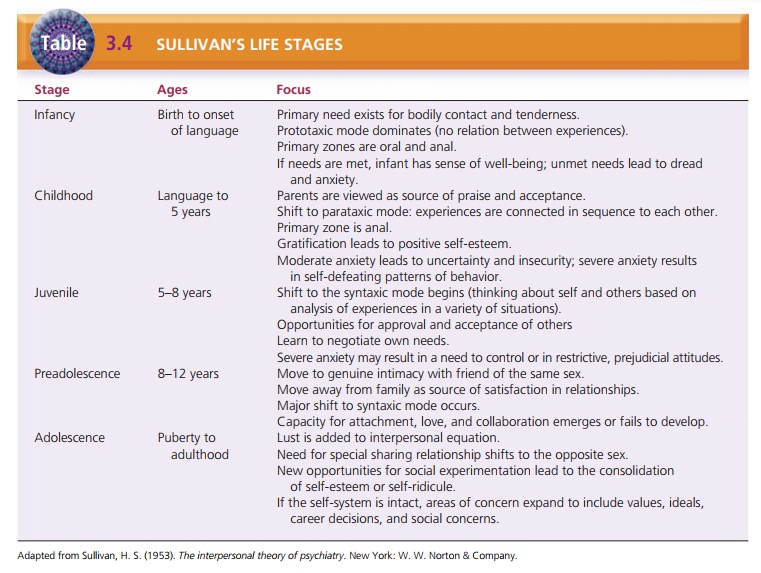 Sullivan is also credited with developing the first therapeutic community or milieu with young men withschizophrenia in 1929 (although the term therapeutic com-munity was not used extensively until Maxwell Jones pub-lished The Therapeutic Community in 1953). In the concept of therapeutic community or milieu, the interaction among clients is seen as beneficial, and treatment emphasizes the role of this client-to-client interaction. Until this time, it was believed that the interaction between the client and the psychiatrist was the one essential component to the client’s treatment. Sullivan and later Jones observed that interactions among clients in a safe, therapeutic setting provided great benefits to clients. The concept of milieu therapy, originally developed by Sullivan, involved clients’ interactions with one another, including practicing inter-personal relationship skills, giving one another feedback about behavior, and working cooperatively as a group to solve day-to-day problems.

Milieu therapy was one of the primary modes of treat-ment in the acute hospital setting. In today’s health-care environment, however, inpatient hospital stays are often too short for clients to develop meaningful relationships with one another. Therefore, the concept of milieu therapy receives little attention. Management of the milieu, or environment, is still a primary role for the nurse in terms of providing safety and protection for all clients and pro-moting social interaction.

Hildegard Peplau (1909–1999; Figure 3.2) was a nursing the-orist and clinician who built on Sullivan’s interpersonal theories and also saw the role of the nurse as a participant observer. Peplau developed the concept of the therapeutic nurse–patient relationship, which includes four phases: orientation, identification, exploitation, and resolution (Table 3.5). 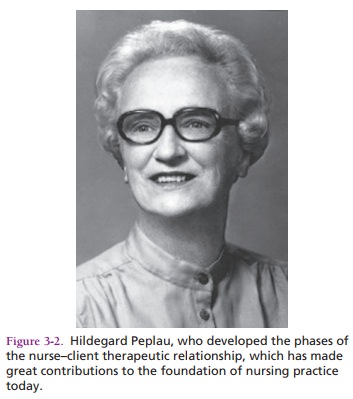 During these phases, the client accomplishes certain tasks and makes relationship changes that help the healing process (Peplau, 1952).

·    The orientation phase is directed by the nurse and in-volves engaging the client in treatment, providing ex-planations and information, and answering questions.

·    The identification phase begins when the client works interdependently with the nurse, expresses feelings, and begins to feel stronger.

·    In the exploitation phase, the client makes full use of the services offered.

In the resolution phase, the client no longer needs pro-fessional services and gives up dependent behavior. The relationship ends.

Peplau’s concept of the nurse–client relationship, with tasks and behaviors characteristic of each stage, has been modified but remains in use today . 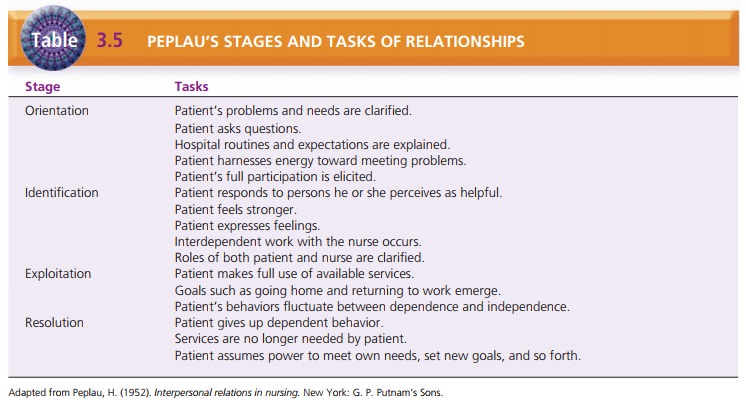 ·    Stranger––offering the client the same acceptance and courtesy that the nurse would to any stranger;

·        Resource person––providing specific answers to ques-tions within a larger context;

·    Teacher––helping the client to learn formally or informally;

·    Leader––offering direction to the client or group;

·    Surrogate––serving as a substitute for another such as a parent or sibling;

·    Counselor––promoting experiences leading to health for the client such as expression of feelings.

Peplau also believed that the nurse could take on many other roles, including consultant, tutor, safety agent, medi-ator, administrator, observer, and researcher. These were not defined in detail but were “left to the intelligence and imagination of the readers” (Peplau, 1952, p. 70).

Four Levels of Anxiety. Peplau defined anxiety as the ini-tial response to a psychic threat. She described four levels of anxiety: mild, moderate, severe, and panic (Table 3.6). These serve as the foundation for working with clients with anxiety in a variety of contexts . 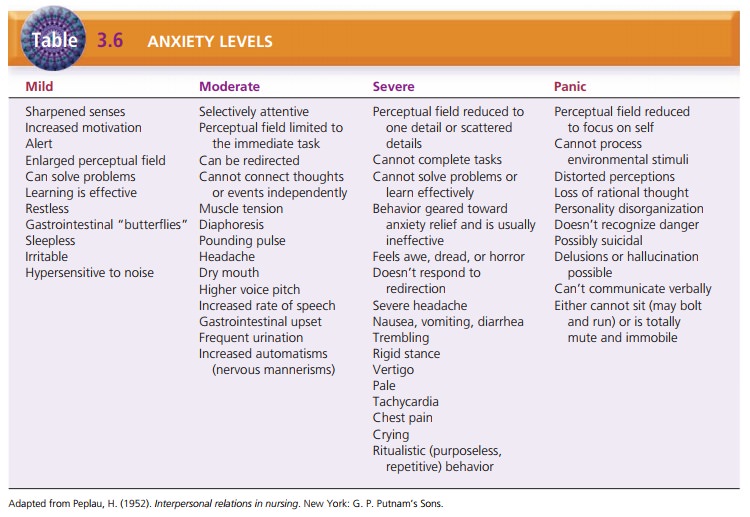 1.     Mild anxiety is a positive state of heightened awareness and sharpened senses, allowing the person to learn new behaviors and solve problems. The person can take in all available stimuli (perceptual field).

2.     Moderate anxiety involves a decreased perceptual field (focus on immediate task only); the person can learn new behavior or solve problems only with assistance. Another person can redirect the person to the task.

3. Severe anxiety involves feelings of dread or terror. The person cannot be redirected to a task; he or she focuses only on scattered details and has physiological symptoms of tachycardia, diaphoresis, and chest pain. A person with severe anxiety may go to an emergency department, believing he or she is having a heart attack.

4. Panic anxiety can involve loss of rational thought, delu-sions, hallucinations, and complete physical immobil-ity and muteness. The person may bolt and run aimlessly, often exposing himself or herself to injury.