Erik Erikson (1902–1994) was a German-born psychoan-alyst who extended Freud’s work on personality develop-ment across the life span while focusing on social and psychological development in the life stages. In 1950, Erikson published Childhood and Society, in which he described eight psychosocial stages of development. In each stage, the person must complete a life task that is essential to his or her well-being and mental health. These tasks allow the person to achieve life’s virtues: hope, pur-pose, fidelity, love, caring, and wisdom. The stages, life tasks, and virtues are described in Table 3.3.

Erikson’s eight psychosocial stages of development are still used in a variety of disciplines. In his view, psychoso-cial growth occurs in sequential phases, and each stage is dependent on completion of the previous stage and life task. For example, in the infant stage (birth to 18 months), trust versus mistrust, the infant must learn to develop basic trust (the positive outcome) such as that he or she will be fed and taken care of. The formation of trust is essential: mistrust, the negative outcome of this stage, will impair the person’s development throughout his or her life. 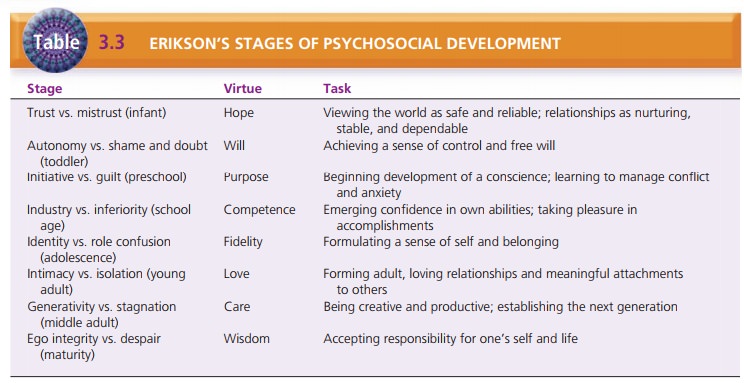 Jean Piaget (1896–1980) explored how intelligence and cognitive functioning develop in children. He believed that human intelligence progresses through a series of stages based on age, with the child at each successive stage demonstrating a higher level of functioning than at previ-ous stages. In his schema, Piaget strongly believed that biologic changes and maturation were responsible for cog-nitive development.

Piaget’s four stages of cognitive development are as follows:

·    Sensorimotor—birth to 2 years: The child develops a sense of self as separate from the environment and theconcept of object permanence; that is, tangible objects do not cease to exist just because they are out of sight. He or she begins to form mental images.

·    Preoperational—2 to 6 years: The child develops the ability to express self with language, understands the meaning of symbolic gestures, and begins to classify objects.

·    Concrete operations—6 to 12 years: The child begins to apply logic to thinking, understands spatiality and re-versibility, and is increasingly social and able to apply rules; however, thinking is still concrete.

·    Formal operations—12 to 15 years and beyond: The child learns to think and reason in abstract terms, fur-ther develops logical thinking and reasoning, and achieves cognitive maturity.