A systemic approach should be considered if extensive psoriasis (more than 20% of the body surface) fails to improve with prolonged courses of tar or dithranol.

A systemic approach should be considered if extensive psoriasis (more than 20% of the body surface) fails to improve with prolonged courses of tar or dithranol. As the potential side-effects are great, local measures should be given a good trial first. The most commonly used systemic treatments are photochemotherapy with psoralen and ultraviolet A (PUVA) treatment, retinoids, methotrexate, hydroxyurea (hydroxycarbamide), sul-fasalazine, mycophenolate mofetil and cyclosporin.

In this ingenious therapy, a drug is photo-activated in the skin by ultraviolet radiation. An oral dose of 8-methoxypsoralen (8-MOP) or 5-methoxypsoralen (5-MOP) is followed by exposure to long-wave ultra-violet radiation (UVA: 320 –400 nm). The psoralen reaches the skin and, in the presence of UVA, forms photo-adducts with DNA pyrimidine bases and cross-links between complementary DNA strands; this inhibits DNA synthesis and epidermal cell division.

The 8-MOP (crystalline formulation 0.6–0.8 mg/kg body weight or liquid formulation 0.3–0.4 mg/kg) or 5-MOP (1.2–1.6 mg/kg) is taken 1–2 h before exposure to a bank of UVA tubes mounted in a cabinet similar to that seen in Fig. 5.17. Psoralens may also be admin-istered in bath water for those unable to tolerate the oral regimen. The initial exposure is calculated either by determining the patient’s minimal phototoxic dose (the least dose of UVA that after ingestion of 8-MOP produces a barely perceptible erythema 72 h after testing) or by assessing skin colour and ability to tan. The usual starting dose is from 0.5 J/cm2 (skin type I: always burns and never tans) to 2.0 J/cm2 (skin type IV: never burns and always tans). Treatment is given two or three times a week with increasing doses of UVA, depending on erythema production and the therapeutic response. Protective goggles worn during radiation and UVA opaque plastic glasses must be used after taking the tablets and for 24 h after each treatment . All phototherapy equipment should be serviced and calibrated regularly by trained personnel. An accurate record of each patient’s cumulative dosage and number of treatments should be kept. 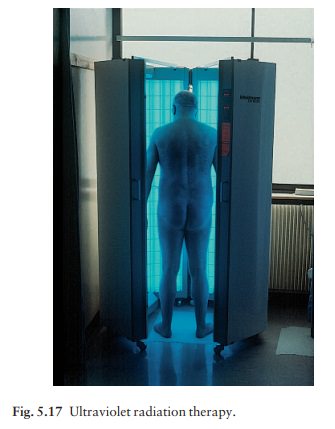 Clearance takes 5–10 weeks. Thereafter it is often possible to keep the skin clear by PUVA once a fort-night or every 3 weeks. However, as the side-effects of PUVA relate to its cumulative dose , main-tenance therapy should not be used unless alternative treatments prove to be unsatisfactory. As far as pos-sible, PUVA therapy is avoided in younger patients.

Side effects Painful erythema is the most commonside-effect but the risk of this can be minimized by careful dosimetry. One-quarter of patients itch during and immediately after radiation; fewer feel nauseated after taking 8-MOP. 5-MOP, not yet available in the USA, is worth trying if these effects become intolerable. Long-term side-effects include premature ageing of the skin (with mottled pigmentation, scattered lentigines,wrinkles and atrophy), cutaneous malignancies (usually after a cumulative dose greater than 1000 J or after more than 250 treatments) and, theoretically at least, cataract formation. The use of UVA blocking glasses  for 24 h after each treatment should pro-tect against the latter. The long-term side-effects relate to the total amount of UVA received over the years; this must be recorded and kept as low as possible, without denying treatment when it is clearly needed.

Acitretin (10–25 mg daily; Formulary 2) is an analogue of vitamin A, and is one of the few drugs helpful in pustular psoriasis. It is also used to thin down thick hyperkeratotic plaques. Minor side-effects are frequent and dose-related. They include dry lips, mouth, vagina and eyes, peeling of the skin, pruritus, thinning of the hair, and unpleasant paronychia. All settle on stopping or reducing the dosage of the drug, but the use of emollients and artificial tears is often recommended.

Acitretin can be used on its own for long periods, but regular blood tests are needed to exclude abnormal liver function and the elevation of serum lipids (mainly triglycerides but also cholesterol). Yearly X-rays should detect bone spurs and ossification of ligaments, espe-cially the paraspinal ones (disseminated interstitial skeletal hyperostosis (DISH) syndrome). Children, and those with persistently abnormal liver function tests or hyperlipidaemia, should not be treated.

The most important side-effect is teratogenicity and acitretin should not normally be prescribed to women of childbearing age. If, for unavoidable clinical reasons, it is still the drug of choice, effective oral contracept-ive measures must be taken and, in view of the long half-life of its metabolite, these should continue for 2 years after treatment has ceased. Blood donation should be avoided for a similar period.

Retinoids and PUVA act synergistically and are often used together in the so-called Re-PUVA regimen. This clears plaque psoriasis quicker than PUVA alone, and needs a smaller cumulative dose of UVA. The standard precautions for both PUVA and retinoid treatment should, of course, still be observed.

This folic acid antagonist (Formulary 2) inhibits DNA synthesis during the S phase of mitosis. After an initial trial dose of 2.5 mg, in an adult of average weight, the drug is given orally once a week and the dose increased gradually to a maintenance one of 7.5–15 mg/week. This often controls even aggressive psoriasis. The drug is eliminated largely by the kidneys and so the dose must be reduced if renal function is poor. Aspirin and sulphonamides displace the drug from binding with plasma albumin, and frusemide (furosemide) decreases its renal clearance: note must therefore be taken of concurrent drug therapy and the dose reduced accord-ingly. Minor and temporary side-effects, such as nausea and malaise, are common in the 48 h after administra-tion. The most serious drawback to this treatment is hepatic fibrosis, the risk of which is greatly increased in those who drink an excessive amount of alcohol. Unfortunately, routine liver function tests and scans cannot predict this reliably, and a liver biopsy to exclude active liver disease is advised for those with risk factors. Exceptions are made for patients over 70 years old and when only short-term treatment with methotrexate is anticipated. Liver biopsy before treatment, or early in the course of therapy, should be repeated after every cumulative dose of 1.5–2 g, especially in less than perfectly healthy drinking adults. Blood checks to exclude marrow suppression, and to monitor renal and liver function, should also be performedaweekly at the start of treatment, with the interval being slowly increased to monthly or every other month depending on when stable maintenance therapy is established.

The drug is teratogenic and should not be given to females in their reproductive years. Oligospermia has been noted in men and fertility may be lowered; however, a child fathered by a man on methotrexate can be expected to be normal. Folic acid, 5 mg daily, taken on days when the patient does not have methotrexate, can lessen nausea and reduce marrow suppression. Methotrexate should not be taken at the same time as systemic steroids or cyclosporin.

Cyclosporin inhibits cell-mediated immune reactions. It blocks resting lymphocytes in the G0 or early G1 phase of the cell cycle and inhibits lymphokine release, especially that of IL-2.

Cyclosporin is effective in severe psoriasis, but pati-ents needing it should be under the care of specialists. The initial daily dose is 3– 4 mg/kg/day and not more than 5 mg/kg/day.

With improvement the dose can often be reduced but the side-effects of long-term treatment include hypertension, kidney damage and persistent viral warts with a risk of skin cancer. Blood pressure and renal function should be assessed care-fully before starting treatment. The serum creatinine should be measured two or three times before starting therapy to be sure of the baseline and then every other week for the first 3 months of therapy. Thereafter, if the results are stable, the frequency of testing will depend on the dosage (monthly for > 2.5 mg/kg/day or every other month for < 2.5 mg/kg/day). The dosage should be reduced if the serum creatinine concentration rises to 30% above the baseline level on two occasions within 2 weeks. If these changes do not reverse them-selves when the dosage has been reduced for 1 month, then the drug should be stopped.

Hypertension is a common side-effect of cyclosporin: nearly 50% of patients develop a systolic blood pres-sure over 160 mmHg and/or a diastolic blood pressure over 95 mmHg. Usually these rises are mild or moder-ate, and respond to concomitant treatment with a calcium channel blocker, such as nifedipine. If this cannot be tolerated, an angiotensin-converting enzyme inhibitor should be used under specialist supervision. Diuretics, which may themselves worsen renal func-tion, and β blockers, which may themselves worsen psoriasis, should probably be avoided. Cyclosporin interacts with a number of drugs  and these should be avoided.

It is also advisable to watch levels of cholesterol, triglycerides, potassium and magnesium, and advise patients that they will become hirsute and that they may develop gingival hyperplasia. Treatment with cyclosporin should not continue for longer than 1 year without careful assessment and close monitoring.

Antimetabolites such as mycophenolate mofetil, 6-tioguanine, azathioprine and hydroxyurea help psori-asis, but less than methotrexate; they tend to damage the marrow rather than the liver. Regular blood moni-toring is again essential. Sulfasalazine occasionally helps psoriasis. 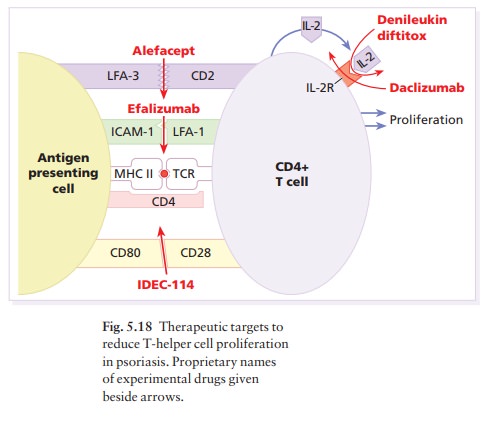