The architecture of protein molecule is complex but well organised. To understand this, a clear idea of certain basic details regarding the mode of arrangement of the structural units inside the molecule is necessary. Linder strom - Lang suggest four types of structural organisation for proteins. They are

The primary structure has the following salient features

·           The amino acid residues are linked by repeating polypeptide bonds.

·           The adjacent polypeptide chains are linked by disulphide bonds.

·           The primary structure provides information on the number and proportion of different amino acids in a protein. Primary structures of a large number of proteins have been determined.

i. human insulin has 51 amino acids distributed in two poly peptide chains. A chain-31 amino acids, B chain-20 amino acids and the polypeptides are linked by disulphide bridges.

Primary structure is ultimately responsible for the native structure of the protein.

The peptide chain thus formed assumes a two-dimentional secondary structure by way of folding or coiling consisting of a helically coiled, zig-zag linear or mixed form. It results from the steric relationship between amino acids located relatively near to each other in the peptide chain. The linkages or bonds involved in the secondary structure formation are hydrogen bonds and disulphide bonds.

These are weak, low energy non-covalent bonds sharing a single hydrogen by two electronegative atoms such as O and N. Hydrogen bonds are formed in secondary structure by sharing H-atoms between oxygen of

The hydrogen bonds in secondary structure may form either an α- helix or β-pleated sheet structure.

These are formed between two cysteine residues. They are strong, high energy covalent bonds.

Proteins exist in the two forms of secondary structure, a helix and b pleated sheet

A polypeptide chain forms regular helical coils called α- helix. These coils are stabilized by hydrogen bonds between carbonyl oxygen of first amino and amide N of fourth amino acid residues. Thus in α- helix intra chain hydrogen bonding is present. The a-helices can be either right handed or left handed. Left handed α- helix is less stable because of the steric interference between the carbonyl group and the side chains. Only the right handed α- helix has been found in protein structure (Fig.5.5). 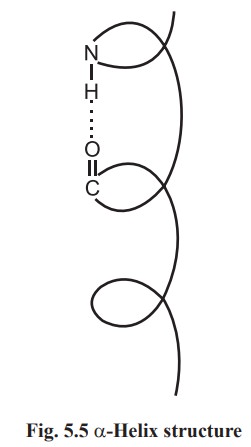 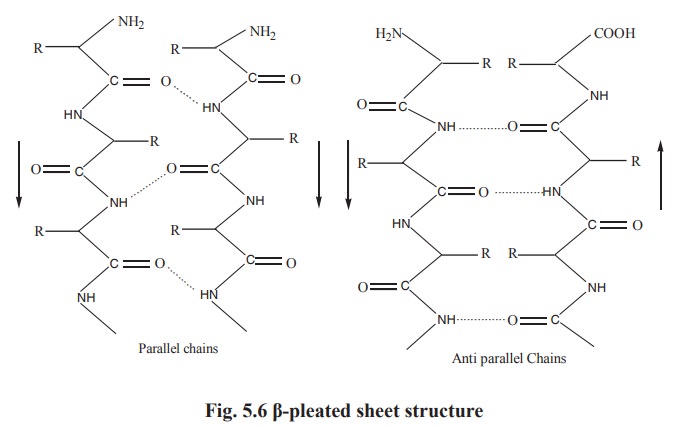 In both parallel and antiparallel β-pleated sheet structures, the side chains are on opposite sides of the sheet. Generally glycine, serine and alanine are more common to form β-pleated sheet. Proline occurs in β-pleated sheet although it tends to distrupt the sheets by producing links. Silk fibroin, a protein of silk worm is rich is β-pleated sheet.

The polypeptide chain with secondary structure may be further folded, super-folded, twisted about itself forming many sizes. Such a structural confirmation is called tertiary structure. It is only one such confirmation which is biologically active and protein in this conformation is called as native protein. Thus the tertiary is constitued by steric relationship between the amino acids located far apart but brought closer by folding (Fig. 5.7). The bonds responsible for interaction between groups of amino acids are as follows.

Normally occur between nonpolar side chains of amino acids such as alanine, leucine, methionine, isoleucine and phenyl alanine. They constitute the major stabilzing forces for tertiary structure forming a compact three-dimentional structure.

Normally formed by the polar side chains of the amino acids.

The interaction occurs between oppostively charged polar side chains of amino acids, such as basic and acidic amino acids.

Occurs between non polar side chains.

These are S-S bonds formed between - SH groups of distant cysteine residues. 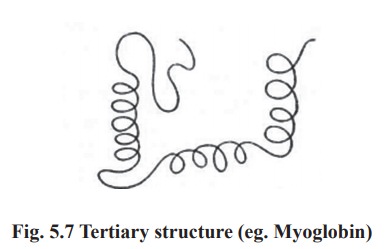 Some proteins are made up of more than one polypeptide chain These peptide chains held together by non-covalent interactions or by covalent cross - links it is referred to as the quarternary structure. The assembly is often called as an oligomer and each constituent peptide chain is called as a monomer or sub unit. The monomers of oligomeric protein can be identical or quite different in primary, secondary or tertiary structure (Fig. 5.8).eg: 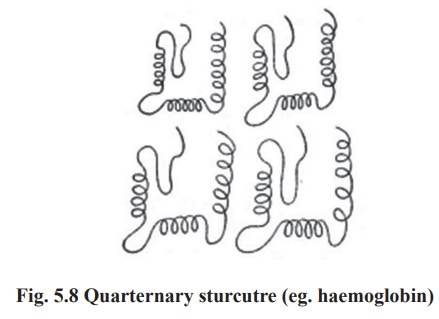