The amino acids are classified based on the nature of their R groups, in particular their polarity or tendency to interact with water at biological pH.

The amino acids are classified based on the nature of their R groups, in particular their polarity or tendency to interact with water at biological pH. The polarity of the R groups varies widely, from totally non polar to highly polar.

The R-group in this class of amino acids are non polar (or) hydrophobic. Six amino acids come under this class, which are glycine, alanine, valine, leucine, isoleucine and methionine. 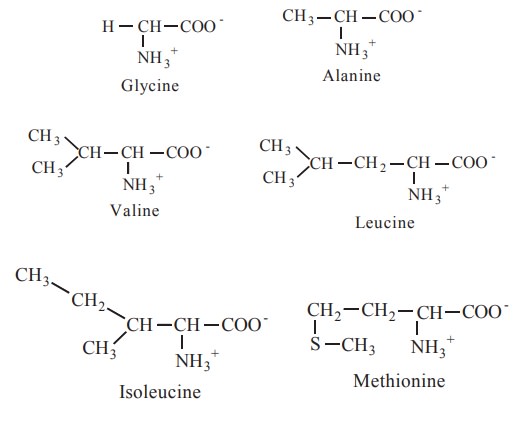 Glycine has the simplest structure. Methionine is one of the two sulphur containing aminoacids and has a non polar thio ether group in its side chain. 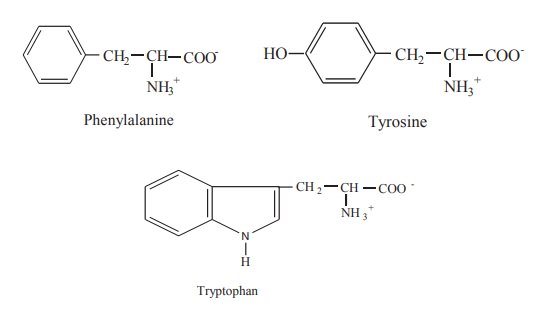 The R groups of these amino acids are more soluble in water or more hydrophilic, than those of the non polar amino acids because they contain functional groups that form hydrogen bonds with water. This class of amino acids includes serine, threonine, cysteine, proline, asparagine and glutamine.

The polarity of serine and threonine is contributed by their hydroxyl groups; that of cysteine by its sulphydryl (-SH) group; and that of asparagine and glutamine by their amide groups. Proline has a distinct cyclic structure and is only moderately polar. Proline has an imino group. Cysteine is readily oxidized to form a covalently linked dimeric amino acid called cystine, in which two cysteine molecules are joined by a disulphide bond. 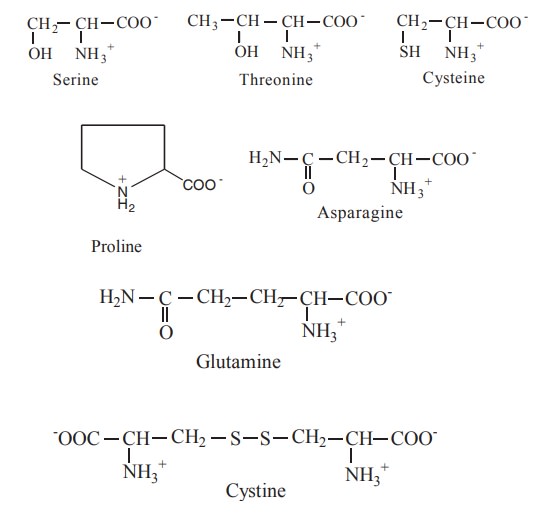 The most hydrophilic R groups are those that are either positively (-NH3+) or negatively (-C00-) charged. The amino acids in which the R groups have significant positive charges at pH 7.0 are lysine, arginine and histidine. 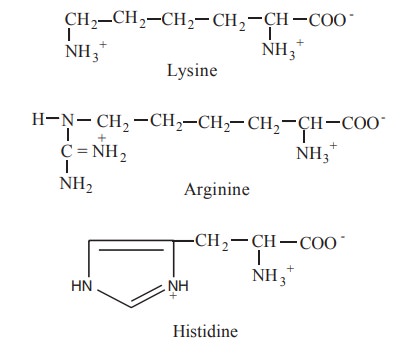 The two amino acids having R groups with a net negative charge at pH 7.0 are aspartate and glutamate.

The peptide bond is also called as the amide bond. The two amino acids, joined by a peptide bond, constitute a dipeptide. The dipeptide is formed by simple condensation reaction.

Protein is made up of one or more polypeptide chains