Amino acids are the simplest units of a protein molecule and they form the building blocks of protein structure.

Amino acids are the simplest units of a protein molecule and they form the building blocks of protein structure. The general formula of an amino acid can be written as,

An amino acid is an amino carboxylic acid. R is the side chain or residue and it represents the group other than -NH2 and -COOH. It may be a hydrogen atom (H) or a methyl group (-CH3) or an aliphatic group or an aromatic group or a heterocyclic group. The amino acids are classified based on the nature of R groups.

Based on the position of amino group on the asymmetric carbon atom, amino acids exist in two types. They are D and L amino acids 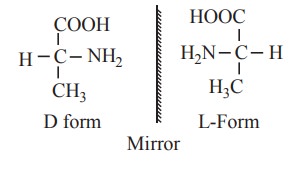 All amino acids are α amino acids because the NH2 group is attached to the a carbon atom which is next to the COOH group. Examination of the structure of an amino acid except glycine, reveals that the α carbon atom has four different groups attached to it, thus making it asymmetric. Because of the presence of asymmetric carbon atom, amino acids exist in two optically active forms, dextrorotatory and levorotatory.

Amino acids are widely distributed in plants and animals.