Amino acids are coloureless, crystalline, generally soluble in water, in acid and in alkali but sparingly soluble in organic solvents.

Amino acids are coloureless, crystalline, generally soluble in water, in acid and in alkali but sparingly soluble in organic solvents.

i. Ionic forms of amino acids

Amino acids bear atleast two ionizable weak acid groups, a - COOH and a -NH2. In solution, two forms of these groups, one charged and another uncharged, exist in protonic equilibrium:

R-COOH and R-NH3+ represent the protonated or acidic partners in these equilibria.

R-COO- and R-NH2 are the conjugate bases of the corresponding acids.

Due to the presence of an acidic and a basic group in the same molecule, the amino acid exists largely as a dipolar ion or a zwitterion, which can react as an acid as well as a base. In zwitterion, the proton from the carboxylic group is transferred to the amino group. Thus a zwitterion carries both positive and negative charges.

The net charge (the algebraic sum of all the positively and negatively charged groups present) of an amino acid depends upon the pH, or proton concentration of the surrounding medium.

The pH at which an amino acid bears no net charge and hence does not migrate to either of the anode or cathode under the influence of an electric current, is known as the isoelectric point or isoelectric pH.

Ninhydrin oxidatively decarboxylates an amino acid to CO2, NH 3 and an aldehyde. The reduced ninhydrin then reacts with the liberated ammonia forming a purple complex, which absorbs light at a wavelength of 570 nm. 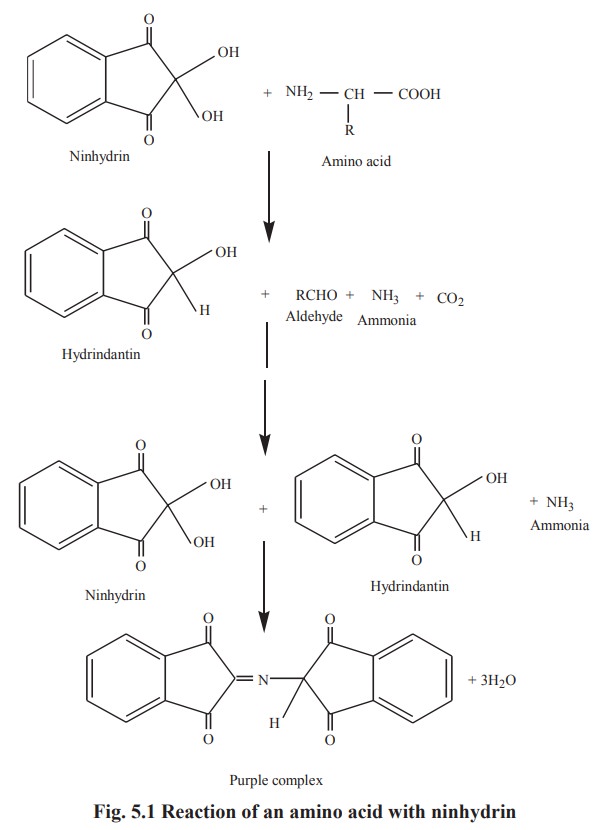