Normally brood fish of channel catfish are about three years old and weigh at least 1.36kg, and a female of that size can be expected to spawn 6000–9000 eggs.

Normally brood fish of channel catfish are about three years old and weigh at least 1.36kg, and a female of that size can be expected to spawn 6000–9000 eggs. Larger brood fish of up to 4.5kg are also used, but the smaller ones are easier to handle. Though brood fish can be obtained from streams or lakes, farmers prefer cultured brood fish grown on a diet rich in animal protein in a clean and healthy environment. In the absence of strains developed through selective breeding, farmers generally choose large individuals that look healthy. To reduce inbreeding depression, it is considered advisable to introduce some brood fish from outside sources every year. New brood stock, as well as those that have already been spawned, are reared in brood ponds.

and the rate of growth required. Smaller fish of about 1–1.4kg are stocked at the rate of 340–450kg/ha and larger fish at a rate of about 900kg/ha. The natural fool produced in a well-fertilized pond (including minnows, tadpoles and other forage organisms) can sustain about 340kg/ha, but supplemental feeding is needed at higher stocking rates. Daily feeding at about 3.4 per cent of body weight is recommended, depending on the availability of natural food. It is a common practice to feed maturing fish once a week, during late winter and early spring.

Additional food consisting of fresh or frozen meat, fish or beef liver, beef heart or other low-priced meat products is given at the rate of 10 to 15 per cent of the body weight. These items of diet are believed to meet the additional needs of minerals and vitamins of brood fish during gonadal development. Feeding is generally stopped if the water temperature goes below 7°C, though some culturists recommend a low-level feeding of 0.5 per cent of the body weight every four to five days during this period. The required sex ratio of brood stock depends on the method of spawning, but generally a 1:1 ratio is considered suitable.

The sexes can be differentiated by the secondary sexual characteristics developed during the spawning season. The female develops a well-rounded abdomen and the genital pore becomes raised and inflamed. The head of the male is wider than the body, with darker pigments under the lower jaw and on the abdomen. A large protruded genital papilla is another distinguishing characteristic.

Channel catfish can be spawned in ponds, special pens and in aquaria or similar containers. Provision of a suitable nest is the major requirement for pond spawning as the natural nesting sites, such as holes in banks or sub-merged stumps in the natural habitats, may not be available in ponds. Shallow ponds of about 0.4ha usually serve as spawning ponds, but bigger ponds of up to 2ha are also sometimes used. Spawning nests may be made of nail kegs, wooden boxes, hollow logs, large milk cans, concrete tiles, metal drums, etc.The number of nests needed is dependent on whether the fertilized eggs are allowed to hatch in the spawning pond itself or are to be removed and hatched indoors in hatchery troughs. It is possible to use fewer nests than pairs of fish, as not all fish spawn at the same time, and so one nest for each two pairs of fish is considered a good rule of thumb to follow. The nests are placed around the edge of the pond at depths varying from 15 to 150cm water, with the open end facing the centre of the pond. The number of brood fish to be introduced depends on whether the eggs are to hatch out in the pond or will be removed for hatching indoors. If the hatching takes place in the pond, a stocking density of 50 females per ha is recommended, whereas if the spawn is to be removed for hatching the density can be raised to 125 females per ha.

Channel catfish spawn in late spring and summer, depending on the strain and the geographic region, at a temperature between 21 and 29°C. After introducing the brood fish in the ponds, the nests are checked regularly to see whether spawning has taken place. As too frequent checking may disturb the spawners, checking only every three days is recommended. Following spawning, the male catfish guards the eggs during incubation and fans them with his fins to keep a current of well oxygenated water flowing over them.

Pen spawning is a relatively more controlled method of propagation (fig. 18.2), where it is possible to ensure mating between a selected pair of brood fish, which is not possible in ponds. Pens are usually placed in ponds, but flowing streams are also suitable. Different sizes of pens are used, but generally they are not larger than 2m x 3m, the depth being less than 1m. They are constructed of wood and welded steel wire mesh, (2.5cm by 5cm mesh) and are embedded in the pond bottom with about 0.3–0.6m of the pen above the water. A spawning nest is placed in each pen which is stocked with a selected pair of brood fish. The female should be slightly smaller than the male, as the male guards the nest after spawning and fighting between the parents often occurs during this period. If larger, the female may chase the male away or even kill it, with the result that the eggs would not receive parental care and might even be eaten by the female. After introduction of the brood fish, the pen is checked on at least alternate days. If spawning has occurred, the female is removed from the 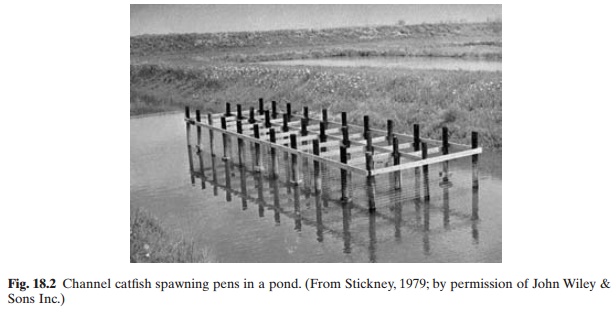 pen and returned to the brood pond. Either the male fish is left to hatch the eggs or the egg mass is collected and hatched indoors. If hatched in the pen, the fry swim out of the nest through the wire mesh into the pond. If the eggs are removed for hatching, each pen is stocked with a second female or a new male and female pair after removing the male that has spawned once.

The aquarium method of spawning is used only when a small number of fish are to be spawned at a time and greater control of spawning is required. Aquaria of 100–220l capacity with a constant flow of water are used.

Fish can be spawned at any season of the year, one pair at a time, by injecting the female with pituitary extract or HCG. The dose required is about 13mg pituitary extract per kg body weight, or an average of 1760mg/kg of HCG. If spawning does not occur within 24 hours, a subsequent injection may be needed. If the fish does not respond to three injections, it is replaced with another female. In the aquarium method, the eggs are hatched artificially.

If the eggs hatch in the spawning pond itself, or in the pen, the fry are collected (after driving off the male or removing it as appropriate) into suitable containers and transferred to fry ponds for rearing. Artificial hatching techniques are preferable, especially in pen spawning, as the spawning nests can be reutilized quickly andthe culturist will know more accurately the number of eggs hatched. It reduces losses to predacious insects and other fish, including the parent females.Though channel catfish eggs can be incubated in hatchery jars, troughs are more commonly used in commercial farms.

Hatching troughs are usually made of sheets of aluminium or stainless steel; their dimensions vary, but they are segmented by partitions across the middle, each segment having a drain and an inlet pipe. The segments make it possible to separate eggs in different stages of development. The eggs are kept in 7.5cm deep baskets, made of 0.6cm meshed hardware cloth and suspended by wire from the side of the trough, so that the water line is below the top of the basket. Paddles attached to a revolving shaft cause the movement of water on the eggs, in a manner similar to that made by male fish when they guard the nests in ponds.

Six to ten days are required for catfish eggs to hatch at temperatures in the range 21–24°C. To combat the growth of fungi, troughs are flush-treated once or twice each day with malachite green at the rate of 2ppm in the water.

The treatment is stopped 24 hours prior to hatching, as the chemical is highly toxic to fry. As the eggs hatch, the fry swim out of the baskets through the hardware cloth into the trough.

Fry can be reared in troughs or ponds, but trough rearing is preferred since it allows greater control and the fry are less exposed to predators. Rearing troughs are generally 2.5–3.7m long, 30–38cm wide and 25–38cm deep, made of wood, metal, plastic or fibreglass. A water flow of about 0.06–0.3l/min and a temperature range between 24 and 29.5°C are maintained. Fry reared in troughs have to be given complete feeds after the yolk sac is absorbed, which takes about eight days after hatching. Floating and non-floating types of commercial feeds, containing 28–32 per cent protein and other nutrients, are fed five or six times each day at the rate of 4–5 per cent of the fry weight. Many culturists feed fry initially with fine particle trout starter rations, that contain about 50 per cent protein. The protein percentage is reduced and the pellet size increased as the fry grow. In a few weeks, a typical catfish ration containing about 30 per cent protein is given. Fry can be raised to fingerling stage in troughs or moved to rearing ponds after they have grown to 2–4cm.

Fingerling ponds are frequently about half a hectare in size, and when stocked at the rate of 90000–125000/ha, fingerlings of 15–20cm can be produced in about four months. Predatory aquatic insects can be controlled with a layer of oil on the pond surface to prevent the insects from breathing atmospheric air. Fry reared in ponds may not need complete feeds as do those in troughs, but it will be safer to use them as the quantity of natural food in the pond is not always predictable. The ration of artificial feed is gradually increased from about 0.5kg per 0.8ha pond to about 4–5 per cent of the fry body weight. Starter feeds in meal or ground mash form may be changed to small pellets when the fish reach about 2.5cm in length. Many farmers produce only fingerlings, for sale to those who grow them to market size or stock recreational waters. There is greater demand for larger fingerlings of 15–20cm, rather than smaller 5–10cm ones. Raising of fingerlings of this size covers the first growing season.