For grow-out of C. batrachus, small ponds of about 200–1000m.sq area are used in Thailand.

For grow-out of C. batrachus, small ponds of about 200–1000m2 area are used in Thailand (fig. 18.4). Normally the ponds are not ferti-lized, but between crops the ponds are dried and occasionally treated with light doses of lime. They are filled to a depth of 50–80cm. Stocking is generally performed in March or April and the duration of culture is usually three to four months. After the first harvest in July or August, the ponds are stocked again between July and September for a second crop. In order to avoid the period when wild-caught catfish are available in the market, the second harvesting may be delayed until the following February or March. 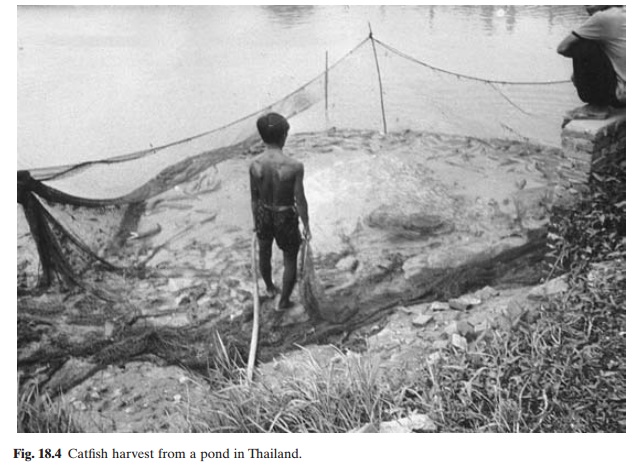 To offset high mortality in commercial ponds, most farmers stock about 200 fingerlings/m2, although the recommended stocking rate is lessthan half of that. The main feed is ground trash fish with rice bran (in a ratio of 10:1 by weight), which forms a sticky paste. By the fourth month the proportion of rice bran is generally increased to two parts, sometimes with one part of cooked broken rice added. The feeding rates are by no means standardized, and each farmer depends on his own experience. Soon after stocking, 2kg feed is given every day in two equal quantities for every 10000 fingerlings. Every two weeks the quantity is doubled, through gradual increases. Many of the problems of poor water quality, diseases and mortality in catfish ponds are due to the heavy rates of feeding. Water in many ponds gives the appearance of a pea soup, with quantities of uneaten feed and blooms of algae. Feeding with more than 0.5kg feed per m2 has been found to result in water pollution and fish mortality, in spite of the hardy nature of catfish and their ability to breathe atmospheric air. Frequent water exchanges, when possible, are an efficient means of pond sanitation and maintenance of water quality standards. The average yield of Clarias in Thailand is 29–32.6 tons per year in a1600m2 pond.A production of up to 100 tons/ha per four-month period has been reported.

The first harvesting of Clarias is done within three to four months, around June/July, when the fish have grown to 25–30cm, weighing 200–300g. The second harvest between February and May, after five to six months’ rearing, produces fish of 35–40cm length, weighing 400–450g. The fish are transported alive to markets in metal boxes (180l capacity) with very little water.

Pangasius ponds are usually somewhat largerthan Clarias ponds, but the methods of grow-out are generally similar. Pangasius is stocked at the rate of two fingerlings of 10–15cm size per m2 pond surface. The duration of culture is 12–15 months.

Cage culture of Pangasius is common in Kampuchea,Thailand and, in more recent years, in Vietnam (Pantulu, 1979). In Kampuchea, cages are made of bamboo poles and splints.

They are box-shaped when installed separately but when trailed behind a fisherman’s boat, as is often done, they are arranged to fit the shape of the boat.

The sizes vary considerably, but the larger cages are 40–50m long, 4–5m wide and 2.5–3.0m high. Small cages are 4m x 4m with a depth of 2.5m. A number of small cages may be lashed together to form a floating cage farm, buoyed with airtight metal drums and walk-ways for feeding, harvesting, etc. In Vietnam, box-shaped cages are made of wooden planks with mesh-wire panels on the sides through which a free flow of water is possible. There is a floating cabin on the cage farm for the owner or caretaker to live in. The whole installation is moored in the river near the shore, or secured directly to the shore.

The cages are usually stocked with wild fry or fingerlings. In Kampuchea, a large cage of the dimensions mentioned above may be stocked with 6000–10000 fry during the period June to August. They are fed with cooked vegetables like pumpkin, banana and a combination of cooked rice bran. As the fish grow in size, they are fed on live and dead weed-fish and kitchen refuse. Harvesting is carried out during the months February to May, when the fish have grown to 1.5–2.5kg each.

In Vietnam, cages are stocked with fry 38– 63mm in length from August to October. Sometimes advanced fingerlings, obtained from rice fields or rivers, are stocked. The stocking density of fry in cages is about 93 fry/m3.

Pangasius are fed on vegetable matter, suchas chopped leaves, rice bran and forage fish. This may be supplemented with cooked or uncooked meat of mussels, snails, etc. Harvesting is usually carried out in March to August, after a culture period of over 10 months on average. The production ranges from 3000– 25000kg/year per cage of capacity 1600m3.