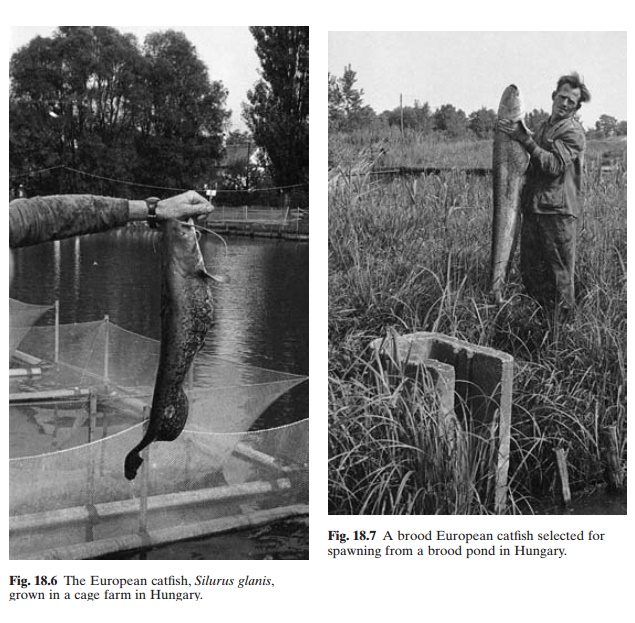 The European catfish, Silurus glanis, known also as the sheatfish or wels (fig. 18.6), is a highly relished fish in many parts of Europe, particularly in the east and central regions.

The European catfish, Silurus glanis, known also as the sheatfish or wels (fig. 18.6), is a highly relished fish in many parts of Europe, particularly in the east and central regions. Besides the taste, the high dressed weight (66 per cent) and the absence of intramuscular bones make it an 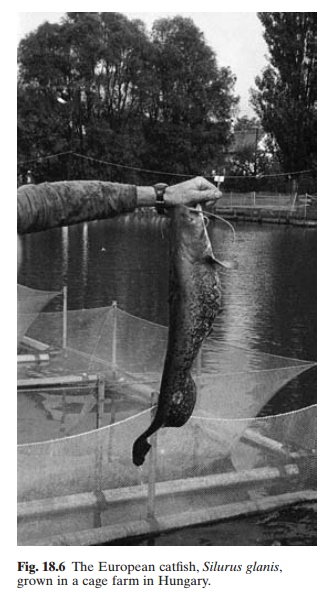 especially valuable species for filleting and processing. It is generally described as a highly voracious species, feeding during adult stages on fish and other aquatic animals. In fact, its culture appears to have been largely as a predator in carp ponds to control weed-fish, or for stocking recreational waters. In recent years, efforts have also been directed towards monoculture of the species in ponds and cages.

Spawning and rearing of fry

Brood fish for spawning are generally selected from captive stocks. Fish less than 4kg in weight are normally not selected as they are seldom mature below that weight (fig. 18.7). Fish weighing 6–10kg are preferred, but sometimes even larger ones weighing up to 25kg are used. As secondary sexual characteristics are not very pronounced, it is somewhat difficult to distinguish the sex of brood fish. Females have a comparatively more oval, convex and blunt genital papilla, a swollen periphery for the anal opening, a less pigmented and more round abdomen and a more oval head. The brood stock are selected and sexed about two months before the spawning season, which is towards the end of spring when the water temperature reaches 20–22°C. The sexes are separated when the water temperature reaches 12–15°C, other-wise the males may injure females by biting. They are held in special holding ponds and fed on trash fish, frogs, tadpoles, etc., at the rate of 2.5 to 3.0 times the total weight of the fish. They readily accept pelleted feeds as well. 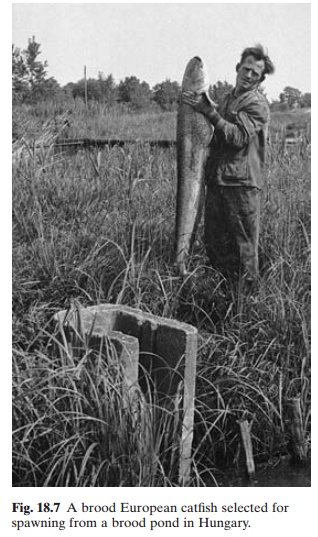 Pond spawning is carried out in small ponds, of area 100–200m2, with depths of about 1m. A number of nests are placed in each pond to induce the fish to spawn. The nests are made of roots of willows, pine branches or similar material, in different shapes. They are usually tent-like or pyramidal in shape (fig. 18.8). A male and female pair are introduced in every nest as the ponds are filled. Occasionally the spawners are subjected to hypophysation with carp pituitary (at the rate of 4mg/kg) at the time of transfer to the spawning pond, and this has been reported to give better results. The male fish cleans the nest and after a period of courtship 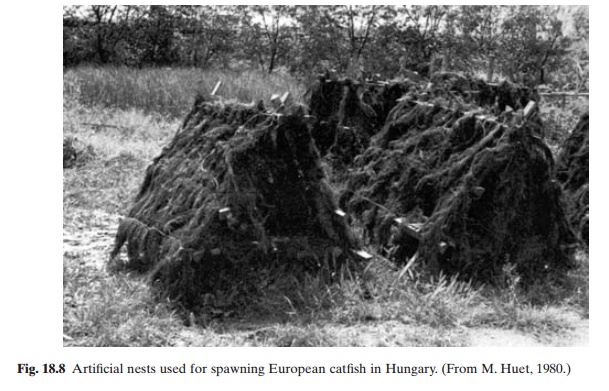 spawning takes place, generally in the morning. The fertilized eggs which adhere to the nest are guarded by the male. The nests are subsequently dismantled and the roots or branches are suspended in a box made of 1.0–1.5mm mesh net, near the water inlet of the pond, for hatching. Hatching can also be done in tanks, troughs or hatching jars.

Hatching occurs two to three days after ovulation, at 45–69 degree-days. The unpigmented yolk-sac fry school together and avoid direct light, hiding under grass or other materials in the pond. Within four to five days after hatching (140 degree-days), the pigmented fry start feeding. In hatching boxes, tanks, troughs, etc., the fry can be fed on plankton or specially prepared doughlike mixtures such as boiled eggs,

fish meat and flour. Trout starter-feeds have been found to be suitable for feeding the fry up to one month. Feeding is initially done five or six times daily, and later the frequency is reduced to three or four times.

As mentioned above, the sheatfish can be spawned by the administration of carp pituitary. The dose required varies between 3.0 and 4.5mg/kg, depending on whether it is the beginning, middle or end of the spawning season. Higher doses are indicated during the beginning than at the end. Usually two injections are given intramuscularly, the first one of about one-tenth the total dose and then the rest after 24 hours. Males are given only half the dose given to the female. Ovulation takes place at 430–460 hour grade. A fish weighing 16kg was reported to yield 1845g or about 300000 eggs (Fijan, 1975). Stripped eggs are fertilized with milt in a 0.3 per cent common salt solution. Because of the structure of the seminal vesicle, there may be difficulty in obtaining enough milt by stripping, in which case half the testes may be removed by dissection and crushed to obtain the milt needed for fertilization. The eggs are fertilized in about two to five minutes, after which they are incubated for hatching.

Because of the sticky nature of the eggs, they tend to clump together. After 10–12 hours, the water flow in the incubator is cut off and the clumped mass treated with a 0.3–0.5 per cent solution of alkaline protease enzyme for two to three minutes, to dissolve the sticky layer and to separate the eggs. The eggs can be treated with malachite green solution (5ppm for 30–60 minutes) to prevent fungal infections.

The hatched larvae are reared in fine-meshed (0.8–1.0mm mesh) sieve-cloth tanks. They are provided with the type of feeds mentioned above and also shaded spots within the tanks into which they can withdraw from the light, when necessary. Two- or three-week-old fry can be used for stocking ponds.

Grow-out of fry to fingerling and market size if generally carried out as monoculture in ponds. Fingerlings have been raised very successfully up to six months, fed on trout starter-feeds and pellets. Small ponds rich in plankton, are stocked at the rate of 10–15 fry per m2. They are fed with pelleted feeds or with ground fresh meat or fish, several times a day.

Yearlings can also be grown in polyculture in carp ponds. Fingerlings of both carp and sheat-fish, weighing 25–30g, are reared together, at stocking rates of 3000–5000 per ha. By autumn of the second year they attain a weight of 900–1100g.

Losses due to predation are more pronounced in the larval and fry stages. Among the diseases reported, the most common one that results in high losses is ichthyophthiriasis. Larger fish may suffer from branchyomycosis.