Production possibility curve shows the menu of choice along which a society can choose to substitute one good for another, assuming a given state of technology and given total resources.

The problem of choice between relatively scarce commodities due to limited productive resources with the society can be illustrated with the help of a geometric device, is known as production possibility curve. Production possibility curve shows the menu of choice along which a society can choose to substitute one good for another, assuming a given state of technology and given total resources.

The explanation and analysis of production possibility curve is based upon certain assumptions, some of them are following

To draw this curve we take the help of production possibilities schedule, as shown below. 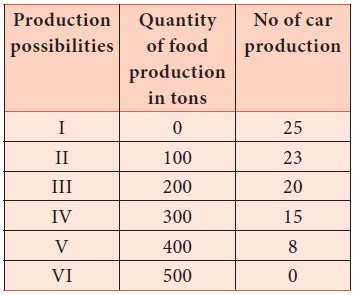 This schedule suggests that if all resources are thrown into the production of food, a maximum of 500 tons of food can be produced, given the existing technology. If on the other hand, all resources are instead used for producing cars, 25 cars can be produced. In between these two extreme possibilities exist. If we are willing to give up some food, we can have some cars. 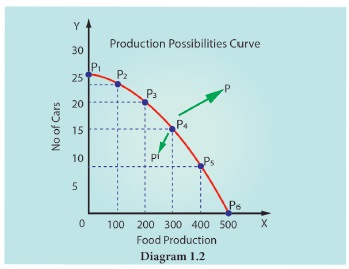 The PPC shifts upward or downward due to:

The production capacity of an economy grows overtime through increase in resource supplies and improvement of technology. This enables PPC to shift upward from AE to A1E1 as shown in figure below. This outward shift of the PPC is the basic feature of economic growth.

Through the device of PPC can be used for many analytical purposes. We shall discuss below some of its popular uses. 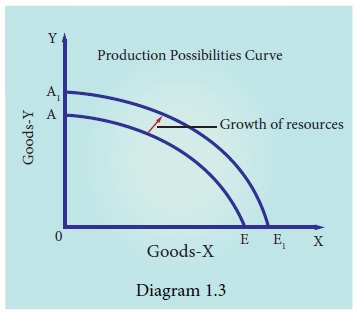 i) The problem of choice

ii) The Notion of Scarcity

The central problems of an economy can be explained with the help of PPC. The solution of problem of what to produce involves the decision regarding the choice of location on the production possibility carves. A production combination represented by any point inside the PPC indicates that the economy is using inefficient methods of production and inefficient combination of resources.