Like any other science, Economics also has its laws or generalisations.

1. Methods of Economics: Deduction and Induction

Like any other science, Economics also has its laws or generalisations. These laws govern the activities in the various divisions of Economics such as Consumption, Production, Exchange and Distribution. The logical process of arriving at a law or generalization in a science is called its method. 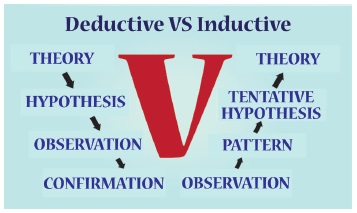 a. Deductive Method of Economic Analysis

It is also named as analytical or abstract method. It consists in deriving conclusions from general truths; it takes few general principles and applies them to draw conclusions. The classical and neo-classical school of economists notably, Ricardo, Senior, J S Mill, Malthus, Marshall, Pigou, applied the deductive method in their economic investigations.

Step 1: The analyst must have a clear and precise idea of the problem to be inquired into.

Step 2: The analyst clearly defines the technical terms used in the analysis. Further, assumptions of the theory are to be precise.

Step 4: Hypotheses should be verified through direct observation of events in the real world and through statistical methods. (eg) There exists an inverse relationship between price and quantity demanded of a good.

b. Inductive Method of Economic Analysis

Inductive method, also called empirical method, is adopted by the “Historical School of Economists”. It involves the process of reasoning from particular facts to general principle.

Economic generalizations are derived in this method, on the basis of

Step 1: Data are collected about a certain economic phenomenon. These are systematically arranged and the general conclusions are drawn from them.

Step 2: By observing the data, conclusions are easily drawn.

Step 3: Generalization of the data and then Hypothesis Formulation

Using the methods, the economist observes facts, such as, changes in the price of a commodity. Similarly, the quantity demanded of that commodity also varies. And he observes these movements and comes up with a theory that these two movements are inversely related, i.e., when the price increases, the quantity demanded of that commodity decreases and vice versa. Thus, he formulates his theory of demand.

He tests his theory by collecting further facts and when his theory stands the test of time and obtains universal acceptance, the theory is raised to the status of a law.

A Law expresses a causal relation between two or more than two phenomena. Marshall states that the Economic laws are statement of tendencies, and those social laws, which relate to those branches of conduct in which the strength of the motives chiefly concerned can be measured by money price.

In natural sciences, a definite result is expected to follow from a particular cause. In Economic science, the laws function with cause and effect. The consequences predicted by the data, necessarily and invariably follow.

However, Economic laws are not as precise and certain as the laws in the physical sciences. Marshall holds the opinion that there are no laws of economics which can be compared for precision with the law of gravitation.

A physical scientist carrying out controlled experiments in his laboratory can test the scientific laws very easily by changing the conditions obtaining there. Changes in Economics science cannot be brought about easily. As a result, prediction regarding human behaviour is likely to go wrong. There are exceptions to the Law of Demand. Thus, economic laws are not inviolable.

As unpredictability is invariably associated with the economic laws. Marshall compares them to the laws of tides. Just as it cannot be predicted and said with certainty that a high tide would follow a low tide, unpredictability prevails in Economics. Human behaviour is volatile. Economic laws are not assertive but they are indicative. The Law of Demand, for example, states that other things remaining the same, the quantity demanded of a commodity increases, as its price decreases and vice versa.

The use of the assumption ‘other things remaining the same’ (ceteris paribus) in Economics makes the Economic laws hypothetical. It might be argued that the laws in other sciences can also be called hypothetical. It should be admitted however that in the case of Economics, the hypothetical elements in its laws are a little less pronounced than in the laws of physical sciences.

But since money is used as the measuring rod, laws in economics are more exact, precise and accurate than the other social sciences. As the value of the measuring- rod money is not constant, there is always an hypothetical element surrounding the laws of Economics.

Some economic laws are simply truisms. For example, saving is a function of income.

Another example of truism is: human wants are unlimited.