Between 20% and 25% of the adult population in the United States has hypertension .

Between 20% and 25% of the adult population in the United States has hypertension (Burt et al., 1995b). Of this population, between 90% and 95% have primary hypertension, meaning that the reason for the elevation in blood pressure cannot be iden-tified. The remaining 5% to 10% of this group have high blood pressure related to specific causes, such as narrowing of the renal arteries, renal parenchymal disease, hyperaldosteronism (miner-alocorticoid hypertension) certain medications, pregnancy, and coarctation of the aorta (Kaplan, 2001). Secondary hypertension is the term used to signify high blood pressure from an identified cause.

Hypertension is sometimes called “the silent killer” because people who have it are often symptom free. In a national survey (1991 to 1994), 32% of people who had pressures exceeding 140/90 mm Hg were unaware of their elevated blood pressure (Burt et al., 1995a). Once identified, elevated blood pressure should be monitored at regular intervals because hypertension is a lifelong condition.

Hypertension often accompanies risk factors for atheroscle-rotic heart disease, such as dyslipidemia (abnormal blood fat levels) and diabetes mellitus. The incidence of hypertension is higher in the southeastern United States, particularly among African Americans. Cigarette smoking does not cause high blood pressure; however, if a person with hypertension smokes, his or her risk of dying from heart disease or related disorders increases significantly.

High blood pressure can be viewed in three ways: as a sign, a risk factor for atherosclerotic cardiovascular disease, or a disease.

As a sign, nurses and other health care professionals use blood pressure to monitor a patient’s clinical status. Elevated pressure may indicate an excessive dose of vasoconstrictive medication or other problems. As a risk factor, hypertension contributes to the rate at which atherosclerotic plaque accumulates within arterial walls. As a disease, hypertension is a major contributor to death from cardiac, renal, and peripheral vascular disease.

Prolonged blood pressure elevation eventually damages blood vessels throughout the body, particularly in target organs such as the heart, kidneys, brain, and eyes. The usual consequences of prolonged, uncontrolled hypertension are myocardial infarction, heart failure, renal failure, strokes, and impaired vision. The left ventricle of the heart may become enlarged (left ventricular hyper-trophy) as it works to pump blood against the elevated pressure. An echocardiogram is the recommended method of determining whether hypertrophy (enlargement) has occurred.

Although the precise cause for most cases of hypertension cannot be identified, it is understood that hypertension is a multifactorial condition. Because hypertension is a sign, it is most likely to have many causes, just as fever has many causes. For hypertension to occur, there must be a change in one or more factors affecting pe-ripheral resistance or cardiac output (some of these factors are out-lined in Fig. 32-1). In addition, there must also be a problem with the control systems that monitor or regulate pressure. Single gene mutations have been identified for a few rare types of hypertension, but most types of high blood pressure are thought to be polygenic (mutations in more than one gene) (Dominiczak et al., 2000).

Several hypotheses about the pathophysiologic bases of ele-vated blood pressure are associated with the concept of hyper-tension as a multifactorial condition. Given the overlap among these hypotheses, it is likely that aspects of all of them will even-tually prove correct. Hypertension may be caused by one or more of the following:

·      Increased renal reabsorption of sodium, chloride, and water related to a genetic variation in the pathways by which the kidneys handle sodium

·      Resistance to insulin action, which may be a common fac-tor linking hypertension, type 2 diabetes mellitus, hyper-triglyceridemia, obesity, and glucose intolerance

Structural and functional changes in the heart and blood vessels contribute to increases in blood pressure that occur with age. The changes include accumulation of atherosclerotic plaque, frag-mentation of arterial elastins, increased collagen deposits, and im-paired vasodilation. The result of these changes is a decrease in the elasticity of the major blood vessels. Consequently, the aorta and large arteries are less able to accommodate the volume of blood pumped out by the heart (stroke volume), and the energy that would have stretched the vessels instead elevates the systolic blood pressure. Isolated systolic hypertension is more common in older adults.

Physical examination may reveal no abnormalities other than high blood pressure. Occasionally, retinal changes such as hemorrhages, exudates (fluid accumulation), arteriolar narrowing, and cotton-wool spots (small infarctions) occur. In severe hypertension, papilledema (swelling of the optic disc) may be seen. People with hypertension can be asymptomatic and remain so for many years. However, when specific signs and symptoms appear, they usually indicate vascular damage, with specific manifestations related to the organs served by the involved vessels. Coronary artery dis-ease with angina or myocardial infarction is a common conse-quence of hypertension. Left ventricular hypertrophy occurs in response to the increased workload placed on the ventricle as it contracts against higher systemic pressure. When heart damage is extensive, heart failure ensues. Pathologic changes in the kidneys (indicated by increased blood urea nitrogen [BUN] and creati-nine levels) may manifest as nocturia. Cerebrovascular involve-ment may lead to a stroke or transient ischemic attack (TIA), manifested by alterations in vision or speech, dizziness, weakness, a sudden fall, or temporary paralysis on one side (hemiplegia). Cerebral infarctions account for most of the strokes and TIAs in patients with hypertension.

A thorough health history and physical examination are necessary. The retinas are examined, and laboratory studies are performed to assess possible target organ damage. Routine laboratory tests in-clude urinalysis, blood chemistry (ie, analysis of sodium, potassium, creatinine, fasting glucose, and total and high-density lipoprotein [HDL] cholesterol levels), and a 12-lead electrocardiogram. Left ventricular hypertrophy can be assessed by echocardiography. Renal damage may be suggested by elevations in BUN and creatinine levels or by microalbuminuria or macroalbuminuria. Additional studies, such as creatinine clearance, renin level, urine tests, and 24-hour urine protein, may be performed.

A risk factor assessment, as advocated by the JNC VI, is needed to classify and guide treatment of hypertensive people at risk for cardiovascular damage. Risk factors and cardiovascular problems related to hypertension are presented in Chart 32-1 and Table 32-3.

The goal of hypertension treatment is to prevent death and complications by achieving and maintaining the arterial blood pressure at 140/90 mm Hg or lower. The JNC VI specified a lower goal pressure of 130/85 mm Hg for people with diabetes mellitus or with proteinuria greater than 1 g per 24 hours ( JNC VI, 1997).

The optimal management plan is inexpensive, simple, and causes the least possible disruption in the patient’s life.

The management options for hypertension are summarized in the treatment algorithm issued in the Sixth Report of the Joint National Committee on Prevention, Detection, Evaluation, and Treatment of High Blood Pressure (1997) (Fig. 32-2) and in Chart 32-2, which lists recommended lifestyle modifications. The clinician uses the algorithm in conjunction with the riskfactor assessment data and the patient’s blood pressure category to choose the initial and subsequent treatment plans for patients.Research findings demonstrate that weight loss, reduced alcohol and sodium intake, and regular physical activity are effective life-style adaptations to reduce blood pressure (Appel et al., 1997; Cushman et al., 1998; Hagberg et al., 2000; Sacks et al., 2001). Studies show that diets high in fruits, vegetables, and low-fat diary products can prevent the development of hypertension and can lower elevated pressures. Table 32-4 delineates the Dietary Approaches to Stop Hypertension (DASH) diet. 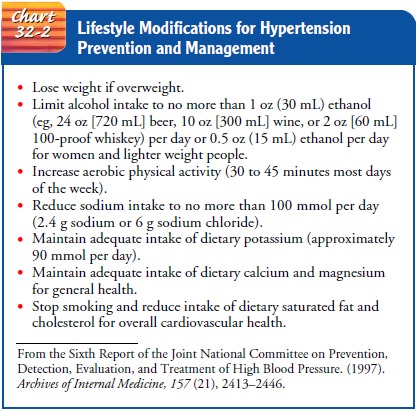 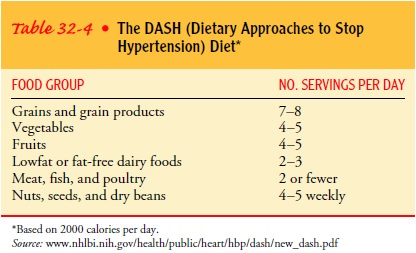 For patients with uncomplicated hypertension and no specific in-dications for another medication, the recommended initial med-ications include diuretics, beta-blockers, or both. Patients are first given low doses of medication. If blood pressure does not fall to less than 140/90 mm Hg, the dose is increased gradually, and ad-ditional medications are included as necessary to achieve control. Table 32-5 describes the various pharmacologic agents used in treating hypertension. When the blood pressure has been less than 140/90 mm Hg for at least 1 year, gradual reduction of the types and doses of medication is recommended. To promote compliance, clinicians try to prescribe the simplest treatment schedule possible, ideally one pill once each day. 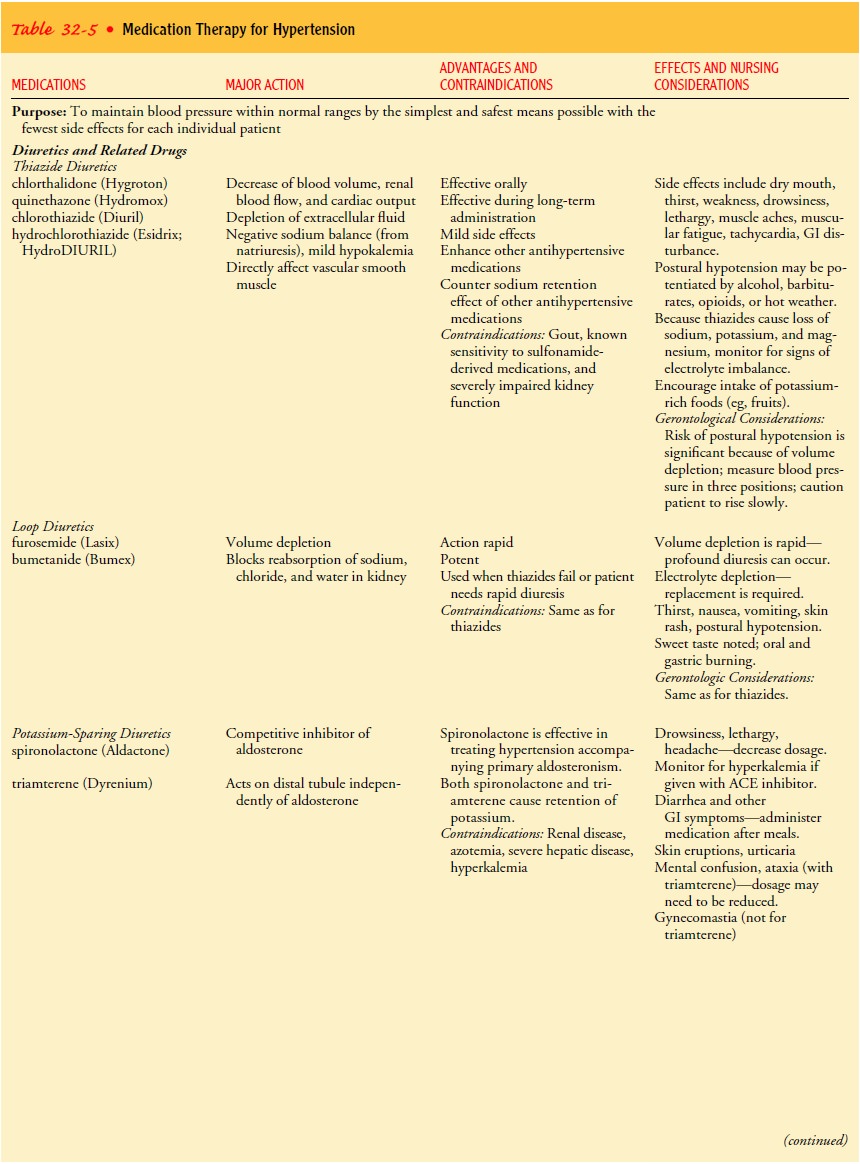 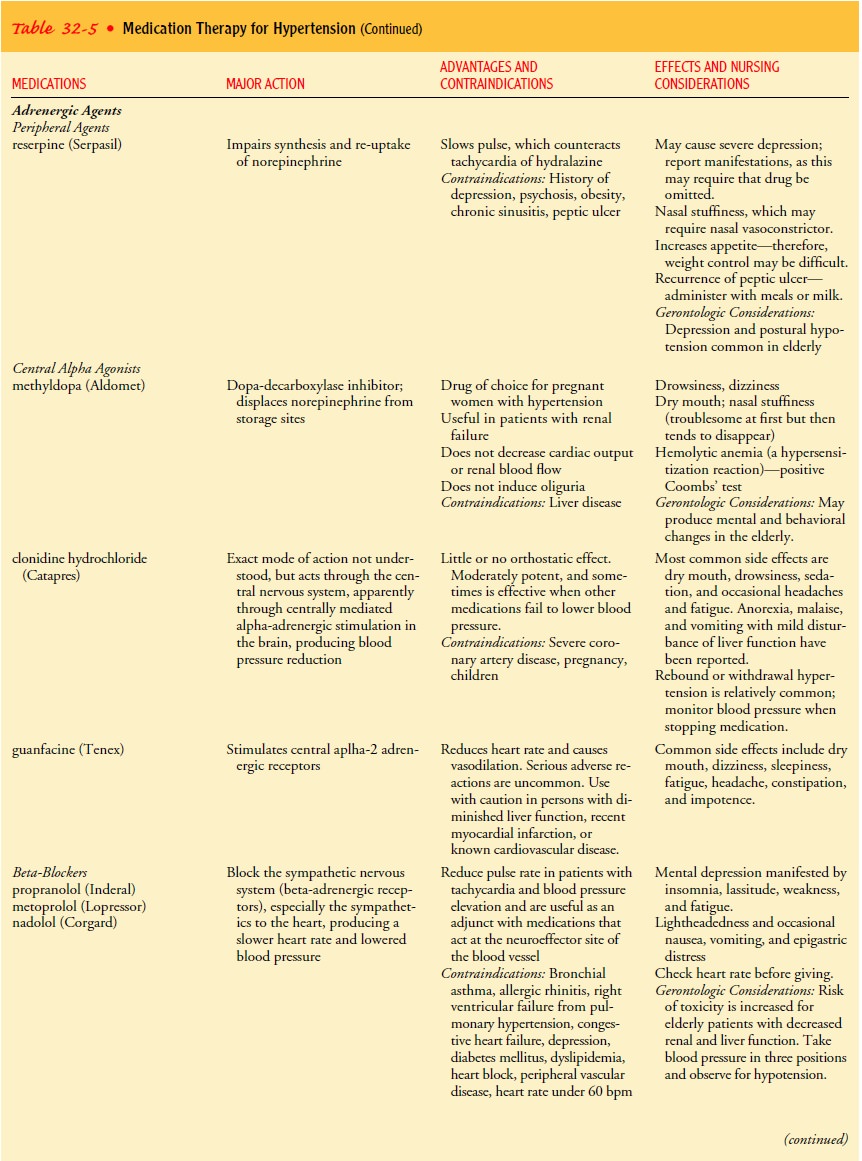 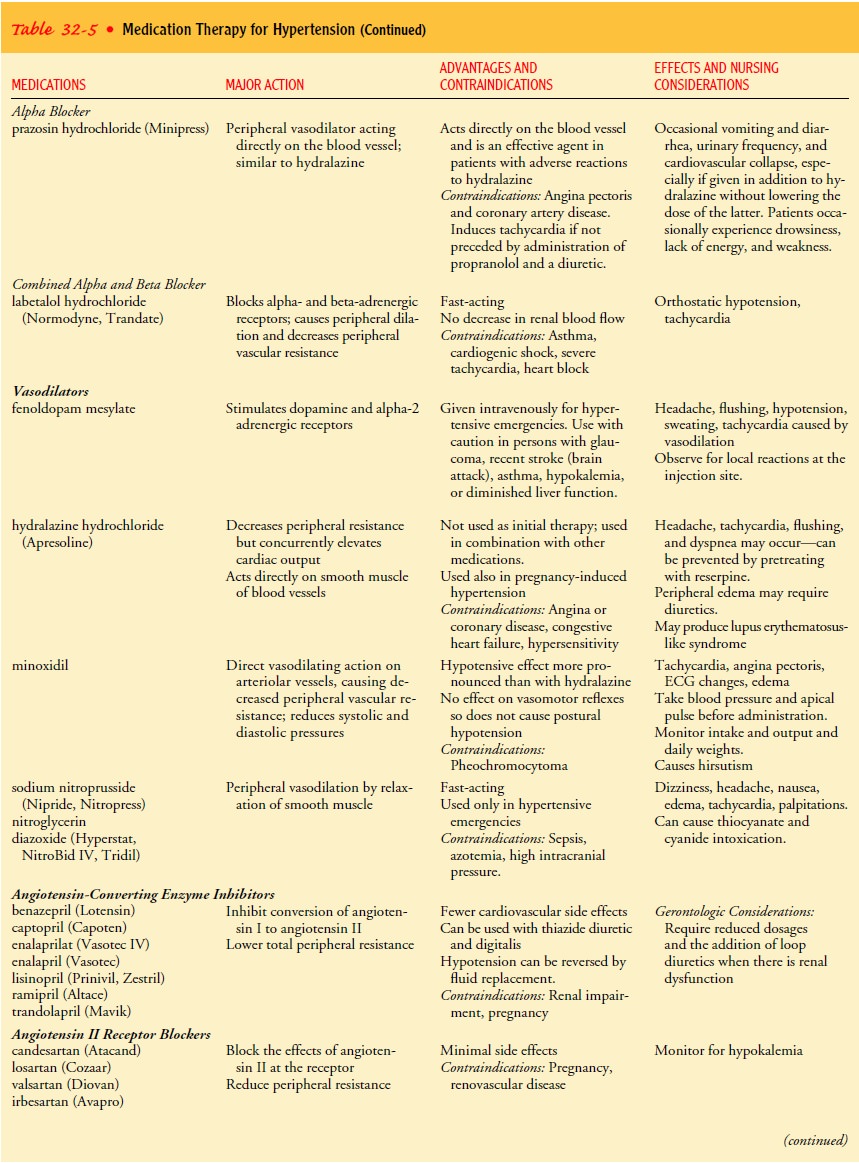 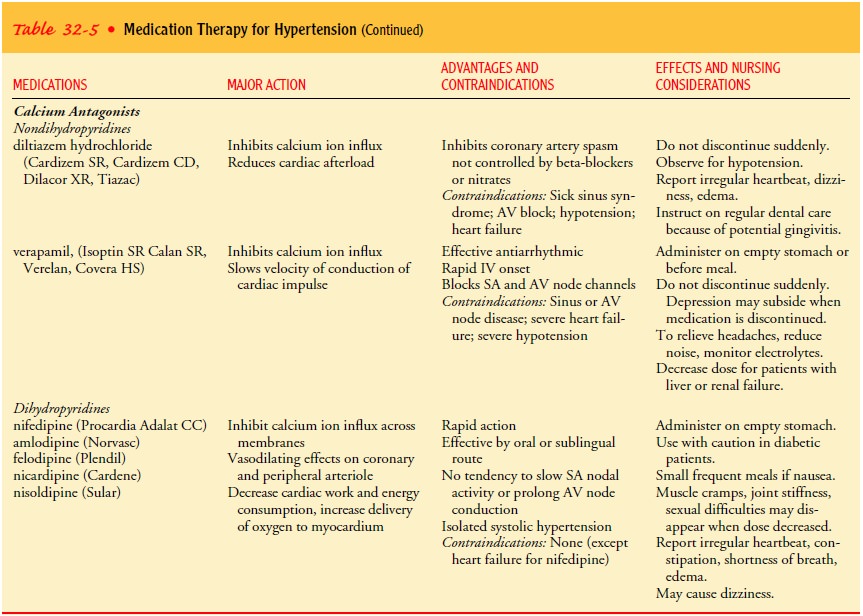 Hypertension, particularly elevated systolic blood pressure, in-creases the risk of death and complications in elderly patients. Treatment reduces this risk. Like younger patients, elderly pa-tients should begin treatment with lifestyle modifications. If med-ications are needed to achieve the blood pressure goal of less than 140/90 mm Hg, the starting dose should be one-half that used in younger patients.