Hypertension is a systolic blood pressure greater than 140 mm Hg and a diastolic pressure greater than 90 mm Hg over a sus-tained period, based on the average of two or more blood pres-sure measurements taken in two or more contacts with the health care provider after an initial screening (Sixth Report of the Joint National Committee on Prevention, Detection, Evaluation, and Treatment of High Blood Pressure [JNC VI], 1997). Table 32-1 shows the categories of blood pressure established in 1997 by the JNC VI . The classification shows the direct relation between the risk of morbidity and mortality from hypertension and the level of systolic and diastolic blood pressures. The higher the systolic or diastolic pressure, the greater the risk. 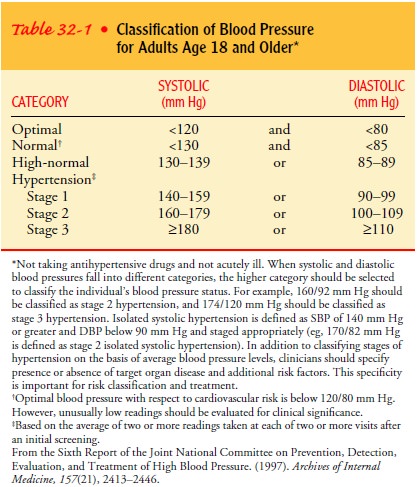 Three stages (1, 2, and 3) of hypertension are defined by the JNC VI, which used these terms, similar to those used to de-scribe cancer progression, so that the public and health care pro-fessionals would be aware that sustained elevations in blood pressure are associated with increased risks to health. Even within the normotensive range, three levels of blood pressure— optimal, normal, and high-normal—were specified to empha-size that the lower the blood pressure, the lower the risk. The JNC VI also developed recommendations for follow-up moni-toring according to initial blood pressure readings at the time of diagnosis (Table 32-2). 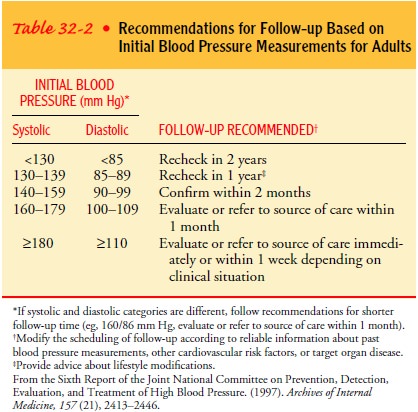