In order to understand the cultural developments of the Sangam Age (which we discuss in the third lesson), we need to know about the prehistoric cultures of Tamil Nadu.

Have you ever thought about these questions?

We seek answer to these questions in this section.

In order to understand the cultural developments of the Sangam Age (which we discuss in the third lesson), we need to know about the prehistoric cultures of Tamil Nadu. Hence, let us see how and when humans first emerged here, before knowing about the genesis of Tamil culture. 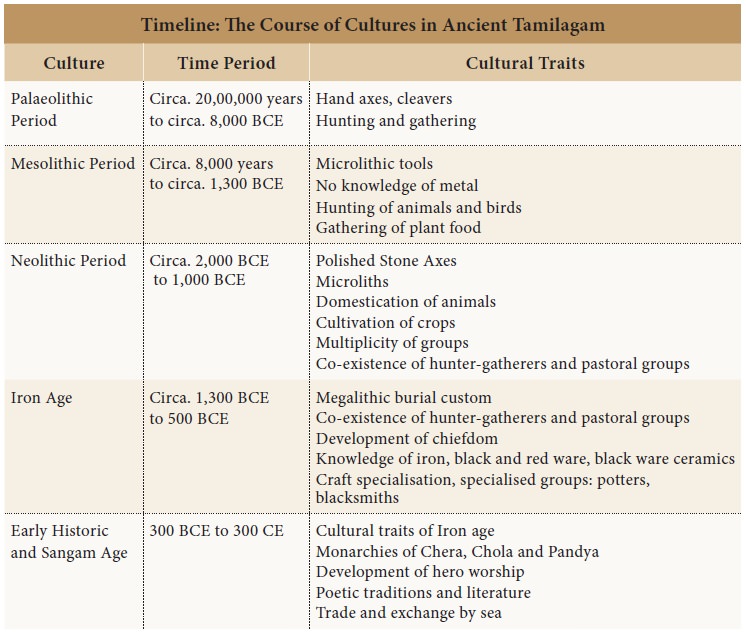 One of the oldest Stone Age tools in the world made by human ancestors, called hominins, had been produced in Tamil Nadu. These stone tools are found near the Chennai region at several sites, especially at Athirampakkam. The archaeological excavations at this site and cosmic-ray exposure dating of the artefacts suggest that people lived here about 1.5 to 2 million years ago. The Kosasthalaiyar river is one of the major cradles of human ancestors in the world. The people who lived here belonged to the species of Homo erectus.

Archaeological excavation refers to digging undertaken to recover archaeological evidence such as stone tools, pottery, animal bones and pollens, in order to understand the past lifestyle of humans.

Cosmic-ray exposure dating – A method in which exposure to cosmogenic rays is done for dating the samples.

In 1863, Sir Robert Bruce Foote, a geologist from England, first discovered Palaeolithic tools at Pallavaram near Chennai. They are the earliest finds of such tools in India. Hence, the hand axe assemblages were considered the Madras Stone Tool Industry. The tools that he discovered are now housed in the Chennai Museum.

The Palaeolithic people hunted wild animals and gathered the naturally available fruits, roots, nuts and leaves. They did not have knowledge of iron and pottery making, which developed much later in history.

Hand axes and cleavers are the important tool types of the Lower Palaeolithic period. These tools fitted with a wooden and bone handle were used for cutting, piercing and digging. The people of this time also used hammer stones and spheroids. The quartzite pebbles and cobbles were chosen as raw materials. The tools are found in the soil deposits and also in the exposed river side. They occur at Pallavaram, Gudiyam cave, Athirampakkam, Vadamadurai, Erumaivettipalayam and Parikulam.

The Lower Palaeolithic tools are also found in the North Arcot

and Dharmapuri districts. The people belonging to this period used basalt rocks for manufacturing artefacts. However, the southern part of Tamil Nadu and Sri Lanka do not have evidence of Lower Palaeolithic Culture.

The Lower Palaeolithic Culture is datable to about 2 - 1.5 million years at Athirampakkam. This cultural phase continued in other parts of India up to 300,000 years ago.

In the course of time, the Middle Palaeolithic Culture emerged during 3,85,000 - 1,72,000 years ago. The tool types of this period underwent a change and smaller artefacts were used. Cores, flakes, scrapers, knives, borers, Levalloisian flakes, hand axes and cleavers are the artefact types of this period. Compared to the previous phase, these tool types became smaller in size. 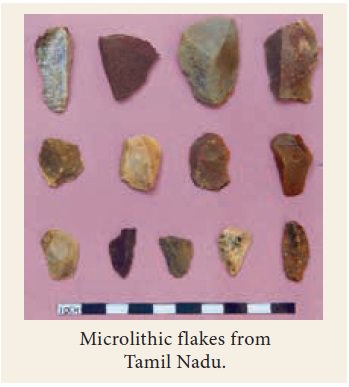 Evidence for the existence of Mesolithic hunter-gatherers is found at Chennai,NorthArcot,Dharmapuri,Salem, Coimbatore, Ariyalur, Tiruchirappalli, Pudukkottai, Madurai, Sivagangai, Tirunelveli and Kanyakumari. The teri sites near Thoothukudi have evidence of microlithic artefacts. These sites have red sand dunes called teris.

Mesolithic people might have engaged in fishing activities. The microlithic artefacts of southern Tamil Nadu are also found in the coastal regions of Sri Lanka. Geologists argue that the Tamil Nadu region and Sri Lanka remained connected before 5000 BCE when the sea level was low.

The people of this period used small artefacts made of chert and quartz. The tool types are scrapers, lunates and triangles. These people hunted wild animals and gathered fruits, nuts and roots for their subsistence.

Triangles are tools in the shape of triangles.

Lunates are tools in the shape of a crescent.

The culture that domesticated animals and cultivated crops is called Neolithic. It is known as the New Stone Age. The Neolithic people used polished stone axes called celts. Cattle rearing was their main occupation. They lived in small villages with houses made of thatched roof and walls plastered with clay. Evidence of Neolithic village is found at Payyampalli in Vellore district and a few sites in the Dharmapuri region.

Payyampalli is a village in Vellore district of Tamil Nadu. The earliest evidence for the domestication of animals and cultivation of plants is found at this site, which was excavated by the Archaeological Survey of India. Evidence for pottery making and cultivation of horse gram and green gram has been found in this village.

These Neolithic sites were part of the Southern Neolithic Culture of India. They are mainly concentrated in the Andhra Pradesh and Karnataka regions. The Neolithic people used stone axes fitted on a wooden handle.These polished stone axes are worshipped in many village temples of Tamil Nadu even today.

The cultural period that succeeded the Neolithic is called the Iron Age. As the name suggests, people used iron technology. It preceded the Sangam Age. The Iron Age was a formative period and the foundation for the Sangam Age was laid in this time. During the Iron Age, many parts of Tamil Nadu were occupied by people. An exchange relationship developed among the people.

The people of this age had knowledge of metallurgy and pottery making. They used iron and bronze objects and gold ornaments. They used shell ornaments and beads made of carnelian and quartz. The evidence for Iron Age is found at many sites including Adhichanallur in Tirunelveli district, Sanur near Madhuranthakam and Sithannavasal near Pudukkottai. Megalithic burial sites are found in the whole of Tamil Nadu.

The Iron Age is also known as megalithic, since people created burials with large stones for the dead people. Within these burials, the skeletons or a few bones of the dead persons were placed along with grave goods including iron objects, carnelian beads and bronze objects. Some of the burials do not have human bones and they have only the grave goods. They may be called memorial burials.

Grave goods are the objects placed in the burials along with the physical remains (bones) of the dead. People may have believed that these would be useful in the after-life. Egyptian pyramids also have similar artefacts. 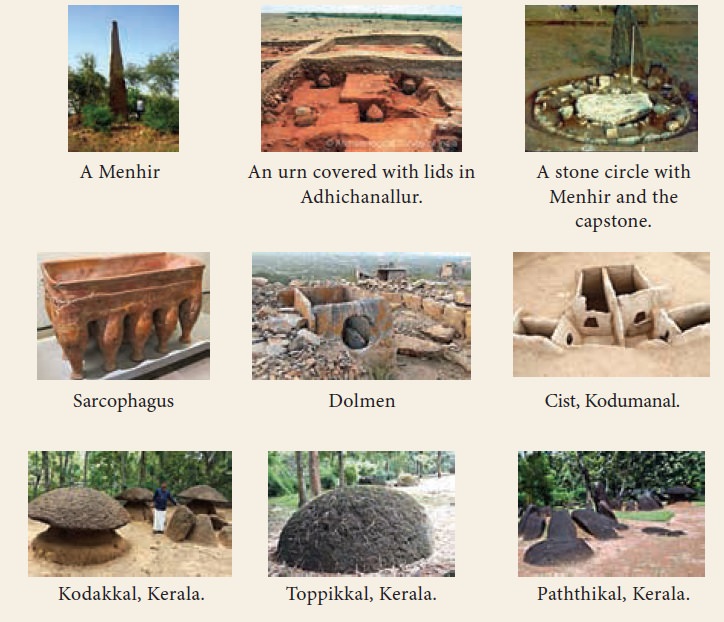 Similar burials were also built in the early historic period or the Sangam Age. The Sangam literature mentions the various burial practices of the people. The megalithic burials are classified as dolmens, cists, menhirs, rock-cut caves, urn burials and sarcophagus. The burial types of Kodakkal (umbrella stone), Toppikkal (hatstone) and Paththikal (hoodstone) are found in Kerala. Dolmens, table-like stone structures, were erected as funerary monuments. Cists are stone enclosures buried under the earth. They were created by placing four stone slabs on the sides, one on top of each other. The cists and dolmens have openings called portholes. Urns are pottery jars and were used for burying the dead. Sarcophagi are burial receptacles made of terracotta. They sometimes had multiple legs. Menhirs are pillar-like stones erected as part of the burials or memorials.

Portholes are holes found in the cists and dolmens on one side. They may have acted as the entrance to the burials. There is a view that they were meant for the movement of the soul or spirit.

Why did they build using numerous burial types? What is the basis of this variation? There could be several factors influencing the megalithic burial types. For example, social status or the importance of the individuals buried or simply the choice of the relatives of the dead could have been the reasons. Raw material availability is another reason. In the deltaic areas where stones are not available, people used the simple urns made by potters using clay.

The people in the Iron Age practiced agriculture, domesticated cattle and sheep, and some of the groups were still hunting and gathering. Millets and rice were cultivated. Irrigation management developed in this period, since many of the megalithic sites are found nearby rivers and tanks. In the deltaic regions, irrigation as a technology had developed. Evidence of rice is seen in the megalithic sites like Adhichanallur in Thoothukudi district and Porunthal near Palani.

The Iron Age society had farming communities, pastoralists and hunter-gatherers. Craft specialists, potters and blacksmiths were the professionals during this period. The society had several groups of peoples (tribes). The size of the burials and the variations found in the burial goods suggests the existence of numerous social groups and their diverse practices. Some of them seem to have had organised chiefdoms. Cattle lifting leading to wars and encroachment and expansion of territories had also started taking place in this period.

Chiefdoms were stratified societies in which chiefs were selected based on kinship relations. 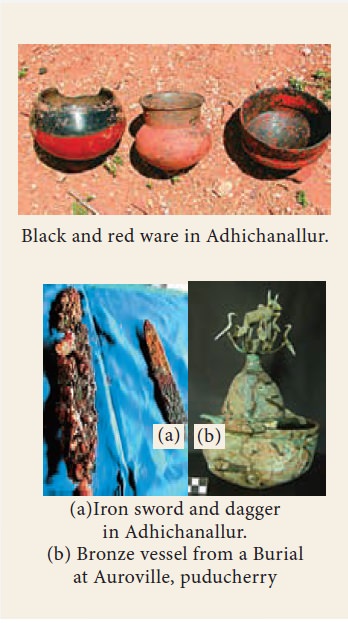 The megalithic burials have abundant iron objects placed in the burials as grave goods. Weapons such as swords and daggers, axes, chisels, lamps and tripod stands are also found. Some of these objects were hafted to wooden or bone or horn handles and used. The iron tools were used for agriculture, hunting, gathering and in battles. Bronze bowls, vessels with stylish finials decorated with animals and birds, bronze mirrors and bells have also been found.