History - Origin of the Earth and the Geological Ages | 9th Social Science : History : Evolution of Humans and Society - Prehistoric Period

Origin of the Earth and the Geological Ages

Origin of the Earth and the Geological Ages

Palaeoanthropologists and archaeol-ogists excavate the soil and rock layers on the earth and extract evidence about hu-man ancestors. These layers and the fossils are scientifically dated to study the various stages in human evolution and prehistory. Through the gathered evidence, they at-tempt to understand the evolution of hu-man history and developments in a chron-ological order.

Archaeology is the study of human past through the analysis and interpretation of material remains.

Palaeoanthropology is the study of the human ancestors and their evolution by the study ofthe fossil remains.

The earth was formed approximately 4.54 billion years ago. Gradually, conditions emerged for the growth of organisms. Then plants and animals came into being, and thereby foundation was laid for the evolution of humans. The long span of time in earth’s history is divided into eras, periods and epochs by the geologists 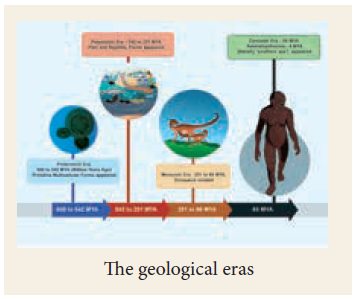 Australopithecines were the apes from which modern humans evolved. Now they are extinct, but they are considered to be the close relatives of humans.