Position of the Nervous System in the Body

The central nervous system (CNS) is divided into the brain, encephalon (A1), and the spinal cord (SC), medulla spinalis (A2).

Position of the Nervous System in the Body

The central nervous system (CNS) is divided into the brain, encephalon (A1), and the spinal cord (SC), medulla spinalis (A2). The brain in the cranial cavity is surrounded by a bony capsule; the spinal cord in the vertebral canal is enclosed by the bony vertebral column. Both are covered by meninges that enclose a cavity filled with a fluid, the cerebrospinal fluid. Thus, the CNS is protected from all sides by bony walls and the cushioning effect of a fluid (fluid cush-ion).

The peripheral nervous system (PNS) in-cludes the cranial nerves, which emerge through holes (foramina) in the base of the skull, and the spinal nerves, which emerge through spaces between the vertebrae (in-tervertebral foramina) (A3). The peripheralnerves extend to muscles and skin areas. They form nerve plexuses before entering the limbs: the brachial plexus (A4) and the lumbosacral plexus (A5) in which the fibers ofthe spinal nerves intermingle; as a result, the nerves of the limbs contain portions of different spinal nerves (see pp. 70 and 86). At the entry points of the afferent nerve fibers lieganglia (A6); these are small oval bodies containing sensory neurons.

When describing brain structures, terms like “top,” “bottom,” “front,” and “back” are inaccurate, because we have to distinguish between different axes of the brain (B). Owing to the upright posture of humans, the neural tube is bent; the axis of the spinal cord runs almost vertically, while the axis of the forebrain (Forel’s axis, orange) runs hori-zontally; the axis of the lower brain divi-sions (Meinert’s axis, violet) runs obliquely. The positional terms relate to theses axes: the anterior end of the axis is called oral or rostral (os, mouth; rostrum, beak), the pos-terior end is called caudal (cauda, tail), the underside is called basal or ventral (venter, abdomen), and the upper side is called dor-sal (dorsum, back).

The lower brain divisions, which merge into the spinal cord, are collectively called the brain stem (light gray) (B7). The anterior division is called the forebrain (gray) (B8). 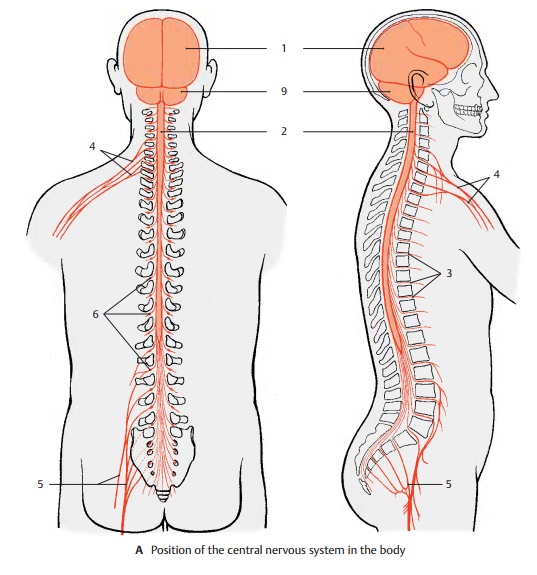