The nervous system serves information processing. In the most primitive forms of organization (A), this function is assumed by the sensory cells (A ŌĆō C1) themselves.

The nervous system serves information processing. In the most primitive forms of organization (A), this function is assumed by the sensory cells (A ŌĆō C1) themselves. These cells are excited by stimuli coming from the environment; the excitation is conducted to a muscle cell (A ŌĆō C2) through a cellular projection, or process. The simplest response to environmental stimuli is achieved in this way. (In humans, sensory cells that still have processes of their own are only found in the olfactory epithelium.) In more differentiated organisms (B), an ad-ditional cell is interposed between the sensory cell and the muscle cell ŌĆō the nerve cell, or neuron (BC3) which takes on the transmission of messages. This cell can transmit the excitation to several muscle cells or to additional nerve cells, thus form-ing a neural network (C). A diffuse network of this type also runs through the human body and innervates all intestinal organs, blood vessels, and glands. It is called the au-tonomic (visceral, orvegetative) nervous system (ANS), and consists of two com-ponents which often have opposing func-tions: the sympathetic nervous system and the parasympathetic nervous system. The interac-tion of these two systems keeps the interiororganization of the organism constant. 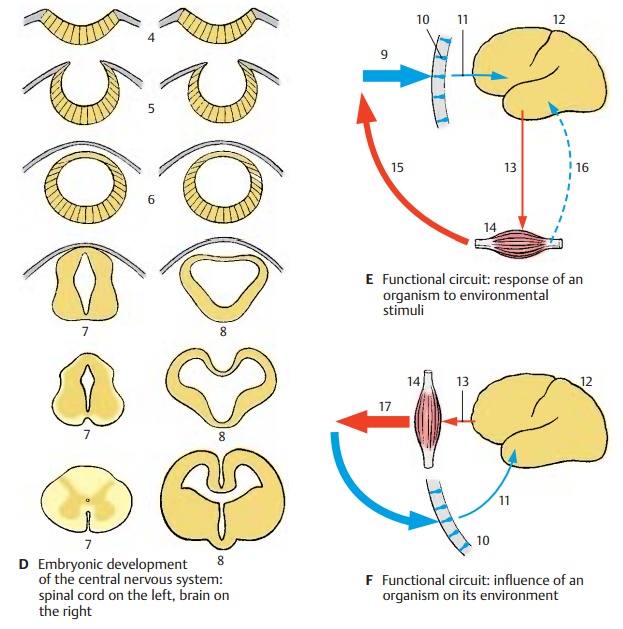 The CNS develops from the neural plate (D4) of the ectoderm which then transforms into the neural groove (D5) and further into theneural tube (D6). The neural tube finallydifferentiates into the spinal cord (D7) andthe brain (D8).