The nervous system, the remaining organism, and the environment are function-ally linked with each other.

The nervous system, the remaining organism, and the environment are function-ally linked with each other. Stimuli from the environment (exteroceptive stimuli) (E9) are conducted by sensory cells (E10) via sensory (afferent) nerves (E11) to the CNS(E12). In response, there is a command from the CNS via motor (efferent) nerves (E13) to the muscles (E14). For control and regula-tion of the muscular response (E15), there is internal feedback from sensory cells in themuscles via sensory nerves (E16) to the CNS. This afferent tract does not transmit environmental stimuli but stimuli from within the body (proprioceptive stimuli). We therefore distinguish between exterocep-tive and proprioceptive sensitivities.

However, the organism does not only re-spond to the environment; it also influences it spontaneously. In this case, too, there is a corresponding functional circuit: the action (F17) started by the brain via efferent nerves (F13) is registered by sensory organs (F10), which return the corresponding informa-tion via afferent nerves (F11) to the CNS (F12) (reafference, or external feedback). De-pending on whether or not the result meets the desired target, the CNS sends out further stimulating or inhibiting signals (F13). Nervous activity is based on a vast number of such functional circuits. 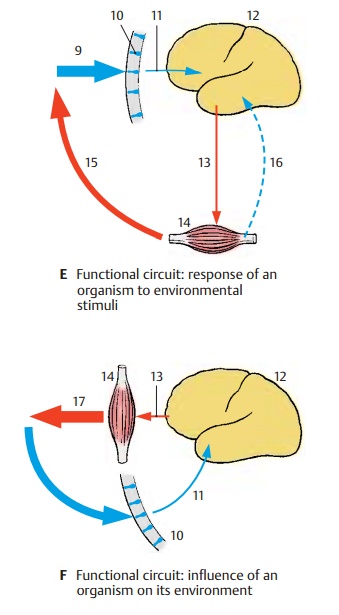