PML is a rare, subacute, degenerative disease of the brain found primarily in adults with other chronic diseases, especially AIDS and reticuloendothelial malignancies, or those re-ceiving immunosuppressive agents. The disease is characterized by the development of impaired memory, confusion, and disorientation, followed by a multiplicity of neurologic symptoms and signs that include hemiparesis, visual disturbances, incoordination, seizures, and visual abnormalities. PML is progressive, with death usually occurring 3 to 6 months after onset of symptoms. The incidence of PML has increased concomitantly with the AIDS epidemic.

In PML, cerebrospinal fluid (CSF) findings are often normal, although some patients show a slight increase in lymphocytes, and protein levels may be elevated. Pathologically, foci of demyelination are found, surrounded by giant, bizarre astrocytes containing in-tranuclear inclusions. The demyelination is due to viral damage to oligodendroglial cells, which synthesize and maintain myelin. Abundant JCV particles can be seen in the brain by electron microscopy (Fig 43–2) and may be concentrated within the nuclei of oligo-dendrocytes. JCV DNA sequences have been demonstrated by PCR in the brain of pa-tients without PML or demyelinating lesions, suggesting that the virus may be latent in the brain prior to immunosuppression. There is no specific treatment for PML, although reducing the immunosuppression, if possible, may have some clinical benefit. 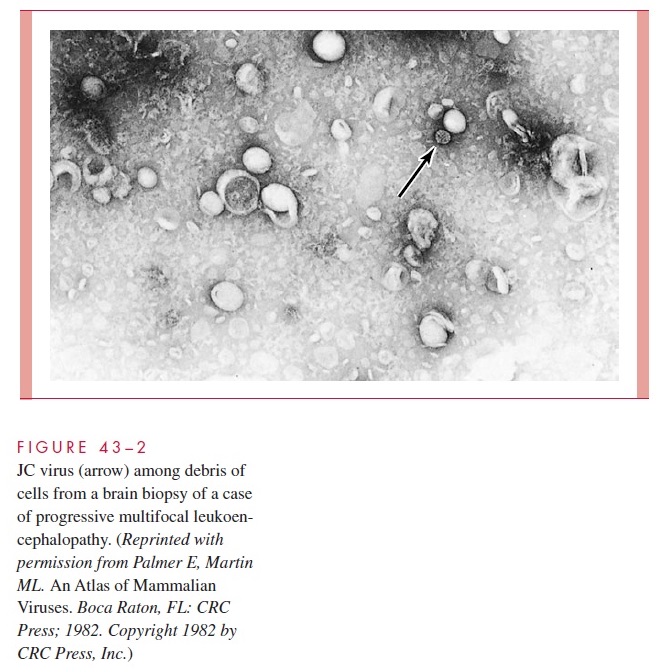 Infection of the urinary tract with JCV and BKV can be demonstrated frequently in im-munocompromised patients but usually in those without symptoms or evidence of renal injury. BKV is associated with a hemorrhagic cystitis, particularly in bone marrow and renal transplant recipients. In addition, BKV is also the cause of a severe nephropathy and vasculopathy that may lead to kidney loss in renal transplant recipients.

The disease de-velops months after renal transplantation. Treatment consists of reducing immunosup-pression, but as many as 50% of patients with this syndrome may require nephrectomy.

Urine from patients excreting these polyomaviruses may contain “decoy” cells similar to those from patients excreting cytomegalovirus. The nucleus of cytomegalovirus-infected cells is smaller with a larger halo effect, that is, a clear zone around the inclusion but within the nuclear membrane. The brain oligodendrocytes exhibit similar changes in pa-tients with PML. BKV can be isolated by routine culture in diploid fibroblast or Vero monkey kidney cells, but nephropathy is preceded by plasma PCR positivity. At present, a kidney biopsy is required for definitive diagnosis. Viral antigens can be demonstrated in tissue by a variety of immunoassays. JCV DNA has been demonstrated in the brain of PML patients by PCR, and PCR of CSF is becoming the diagnostic test for PML.