In 1983, Kary Mullis developed a new technique that made it possible to synthesize large quantities of a DNA fragment without cloning it.

In PCR, oligonucleotide sequences identical to those flanking the targeted sequence are first synthesized. These synthetic oligonucleotides are usually about 20 nucleotides long and serve as primers for DNA synthesis. Pieces ranging in size from less than 100 bp to several 1000 bp in length can be amplified, and only 10–100 pmol primer is required. The concentration of target DNA can be as low as 10–15 mL.

The reaction mix for PCR contains (a) the target DNA (b) a very large excess of the desired primers, (c) a thermostable DNA polymerase, and (d ) four deoxyribonucleoside triphosphates. Only DNA polymerases that are able to function at the high temperatures can be employed in the PCR technique. aq poly-merase from the thermophilic bacterium Thermus aquaticus andthe Vent polymerase from Thermococcus litoralis are the two popu-lar enzymes used in the PCR. 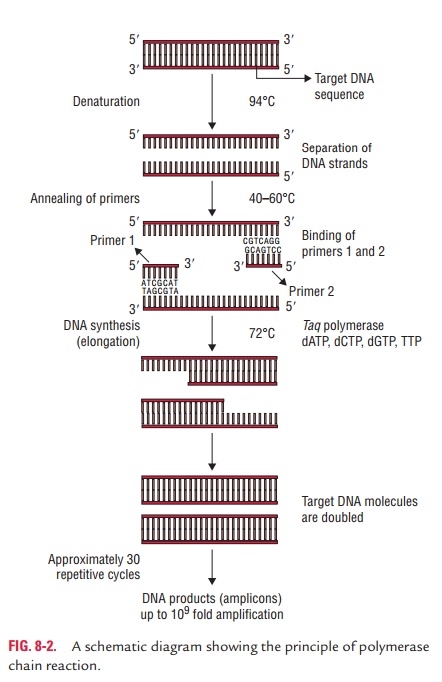 Step 1: The target DNA containing the sequence to be ampli-fied is heat denatured to separate its complementary strands. Normally the target DNA is between 100 and 5000 bp in length.

At the end of one cycle, the targeted sequences on both strands are copied. When the three-step cycle is repeated, the four strands from the first cycle are copied to produce eight fragments. The third cycle yields 16 products. Theoretically, 20 cycles will produce about one million copies of the target DNA sequence, and 30 cycles yield around one billion copies.

The PCR technique has now been automated and is carried out through a specially designed machine called thermocy-cler. Currently, a thermocycler or PCR machine can carry out 25 cycles and amplify DNA 105 times in as little as 57 minutes. During a typical cycle, the DNA is denatured at 94°C for 15 seconds; then the primers are annealed and extended (steps 2 and 3) at 68°C for 60 seconds. PCR technology is improving continually and undergoing many changes as follows:

a)       Nowadays, RNA can be efficiently used in PCR proce-dures. The Tth DNA polymerase, a recombinant Thermus thermophilus DNA polymerase, will transcribe RNA to DNAand then amplify the DNA. Cellular RNAs and RNA viruses may be studied even when the RNA is present in very small amounts (as few as 100 copies can be transcribed and amplified).

b)       Also, PCR can quantitate DNA products without the use of isotopes. This allows one to find the initial amount of target DNA in less than an hour using automated equip-ment. Quantitative PCR is quite valuable in virology and gene expression studies.

c)        As mentioned earlier, the target DNA to be amplified is normally less than about 5000 bp in length. A long PCR technique has been developed that will amplify sequences up to 42 kilo bases long. It depends on the use of error-correcting polymerases because Taq polymerase is error-prone.

d)       Multiplex PCR is another modification of PCR in which twoor more target sequences can be demonstrated simultane-ously in a single specimen at the same time. This method uses two or more primer sets designed for amplification of different targets. Multiplex is now increasingly evaluated for simultaneous demonstration of two or more patho-gens in a clinical specimen.

e)        Real-time PCR is the most recent development. It is so named,because the PCR amplicons can be detected in real time. In fact, “real time” refers to the detection of amplicons after each PCR cycle. Several commercial instruments are available that combine PCR amplification of target DNA with detection of amplicons in the same closed vessel. Probe detection formats involve detecting fluorophores. Results are semiquantitative and can be obtained in considerably less time than it takes to perform a conven-tional PCR assay.