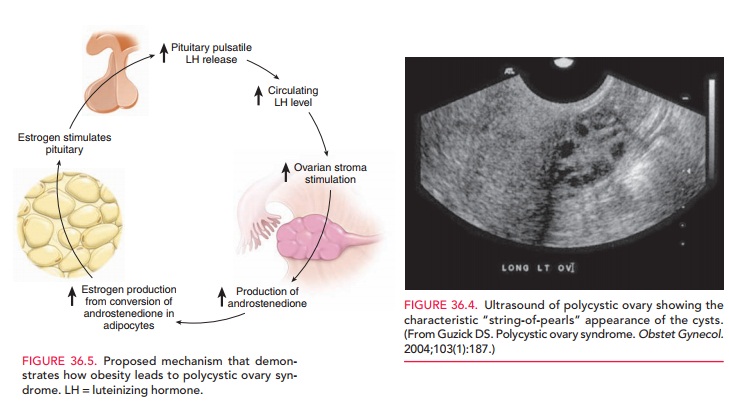 Polycystic ovary syndrome (PCOS) is the most commoncause of androgen excess and hirsutism.

Polycystic ovary syndrome (PCOS) is the most commoncause of androgen excess and hirsutism.

The etiology of this disorder is unknown. Some cases appear to result from a genetic predisposition, whereas others seem to result from obesity or other causes of LH excess.

Symptoms of PCOS include oligomenorrhea or amenorrhea, acne, hirsutism, and infertility. The disorder is characterizedby chronic anovulation or extended periods of infrequent ovulation (oligo-ovulation). It is a syndrome primarily defined by excess androgen. The definition of PCOS has varied in the past, resulting in the National Institutes of Health (NIH)-convening consensus conferences in 1990 and 2000. In 2003 the Rotterdam consensus workshop developed a more encompassing definition of PCOS. To establish the diagnosis, the patient should have two of the following criteria: 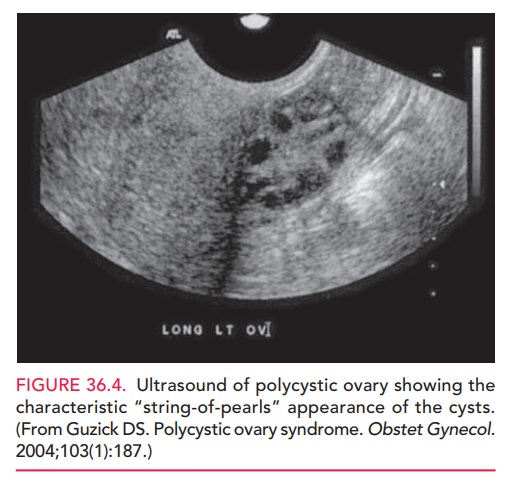 It is also important to rule out other endocrine disorders that can mimic PCOS, such as congenital adrenal hyper-plasia, Cushing syndrome, and hyperprolactinemia.

In many women with PCOS, obesity seems to be the com-mon factor (seen in 50% of patients), and the acquisition of body fat coincides with the onset of PCOS. In fact, Stein andLeventhal first described PCOS as women with hirsutism, irregular cycles, and obesity. (PCOS was originally called Stein-Leventhal syndrome.) PCOS is related to obesity by the following mechanism: LH stimulates the theca-lutein cells to increase androstenedione production. Andro-stenedione undergoes aromatization to estrone within adipocytes. Although estrone is a weak estrogen, it has a positive-feedback action or stimulating effect on the pitu-itary secretion of LH. LH secretion is, therefore, stimu-lated by increased estrogen. With increasing obesity comes increased conversion of androstenedione to estrone. With the increased rise in androstenedione, there is coincident increased testosterone production, which causes acne and hirsutism (Fig. 36.5). 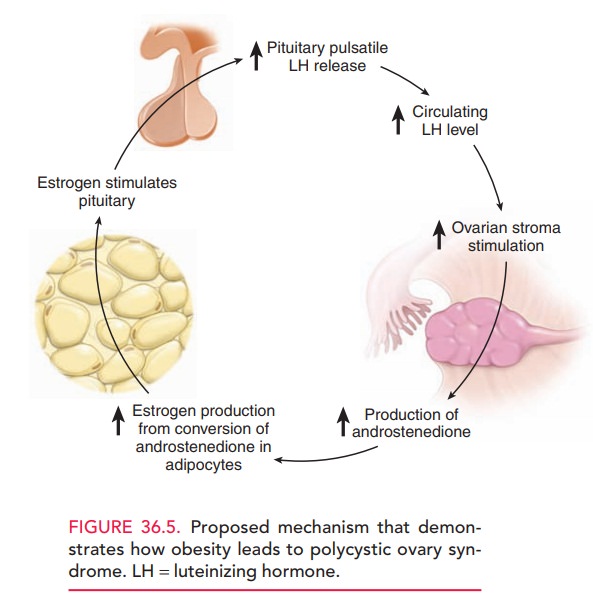 Therefore, PCOS can be viewed as one of excess androgen and excess estrogen. The unopposed long-term elevated estrogen levels that characterize PCOS increases the risk of abnormal uterine bleeding, endometrial hyperplasia, and, in some cases, the development of endometrial carcinoma.

The typical woman with PCOS has many of the signs of metabolic syndrome (Syndrome X). Approximately 40% of patients with PCOS have impaired glucose toler-ance, and 8% have overt type 2 diabetes mellitus. These patients should be screened for diabetes. Classic lipid abnormalities include elevated triglyceride levels, low high-density lipoprotein (HDL) levels, and elevated low-density lipoprotein (LDL) levels. Hypertension is also common in individuals with this condition. The combina-tion of the preceding abnormalities potentially increases the risk of cardiovascular disease.

PCOS is a functional disorder whose treatment should be targeted to interrupt the disorder’s positive-feedback cycle.

The most common therapy for PCOS is the administra-tion of oral contraceptives, which suppresses pituitary LH production. Suppressing LH causes decreased production of androstenedione and testosterone.

If a woman with PCOS wishes to conceive, oral contracep-tive therapy is not a suitable choice. If the patient is obese, aweight-reduction diet designed to restore the patient to a normal weight should be encouraged. With body weight reduction alone, many women resume regular ovulatory cycles and conceive spontaneously.

Hyperthecosis is a more severe form of PCOS.In cases ofhyperthecosis, androstenedione production may be so great that testosterone reaches concentrations that cause viriliza-tion. Women with this condition may exhibit temporal balding, clitoral enlargement, deepening of the voice, and remodeling at the limb–shoulder girdle. Hyperthecosis is often refractory to oral contraceptive suppression. It is also more difficult to successfully induce ovulation in women with this condition.