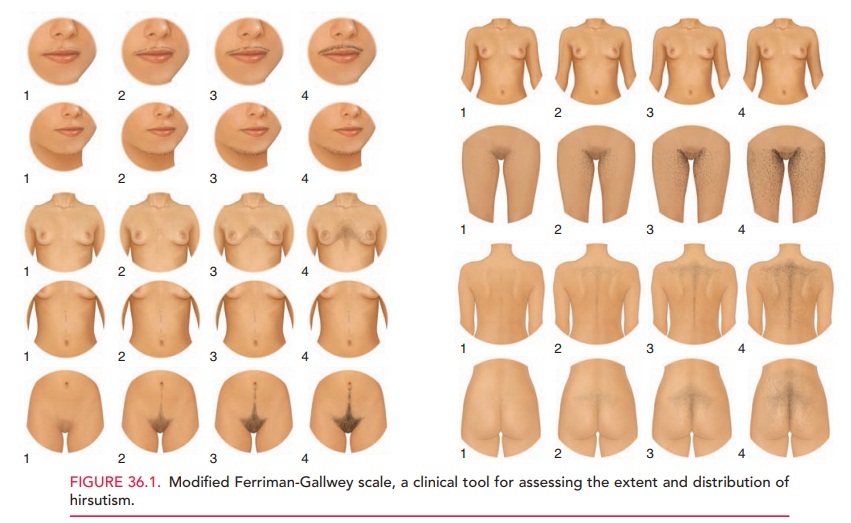 Hirsutism is excess terminal hair in a male pattern ofH distribution.It is manifested initially by the appear-ance of midline terminal hair.

Hirsutism is excess terminal hair in a male pattern ofH distribution.It is manifested initially by the appear-ance of midline terminal hair. Terminal hair is darker, coarser, and kinkier than vellus hair, which is soft, downy, and fine. Care must be taken to evaluate the pos-sibility that excess terminal hair is familial, not patholog-ical, in origin. A scale used for the evaluation of hirsutism is shown in Figure 36.1. When a woman is exposed to excess androgens, terminal hair first appears on the lower abdomen and around the nipples, next around the chin and upper lip, and finally between the breasts and on the lower back. Usually, a woman with hirsutism also has acne. For women in Western cultures, terminal hair on the abdomen, breasts, and face is considered unsightly and presents a cosmetic problem. As a result, at the first sign of hirsutism, women often consult their physician to seek a cause for the excess hair growth and seek treatment to eliminate it. 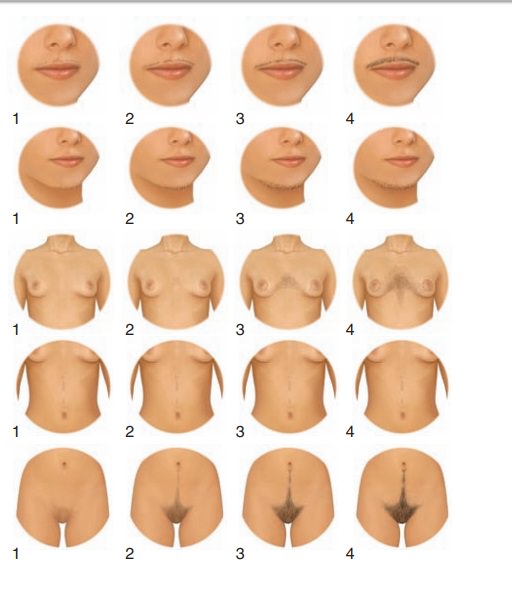 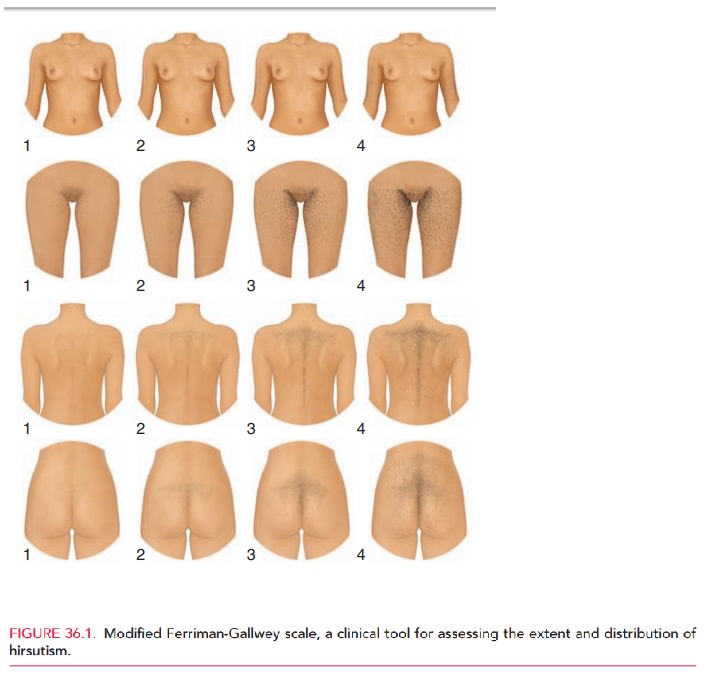 Virilization is defined as masculinization of a woman andis associated with a marked increase in circulating testosterone.As a woman becomes virilized, she first notices enlargement of the clitoris, followed by temporal balding, deepening of the voice, involution of the breasts, and a remodeling of the limb–shoulder girdle as well as hirsutism. Over time, she takes on a more masculine appearance.

Hirsutism and virilization may be clinical clues to an underlying androgen excess disorder.

When evaluating and treating hirsutism and virilization, the sites of androgen production and the mechanisms of androgen action should be considered.

Idiopathic (constitutional or familial) hirsutism (a diagnosis of exclusion) is the most common nonpathologic etiology, representing about one-half of all cases. The most common pathologic causes of hirsutism are polycystic ovarian syn-drome, followed by congenital adrenal hyperplasia. These conditions must be diagnosed by laboratory evaluations. Treatment of androgen excess should be directed at sup-pressing the source of androgen excess or blocking andro-gen action at the receptor site.