Adrenal disorders that cause an increase in androgen pro-duction can lead to hirsutism and virilization; the most common are congenital adrenal hyperplasia, Cushing syn-drome, and adrenal neoplasms.

Adrenal disorders that cause an increase in androgen pro-duction can lead to hirsutism and virilization; the most common are congenital adrenal hyperplasia, Cushing syn-drome, and adrenal neoplasms.

The most common cause of increased adrenal androgen pro-duction is adrenal hyperplasia as a result of 21-hydroxylasedeficiency; 21-hydroxylase catalyzes the conversion of pro-gesterone and 17α-hydroxyprogesterone to desoxycortico-sterone and compound S.

When 21-hydroxylase is deficient, there is an accumu-lation of progesterone and 17α-hydroxyprogesterone, which are metabolized subsequently to DHEA. This dis-order affects approximately 2% of the population and is caused by an alteration in the genes for 21-hydroxylase, which are carried on chromosome 6. The genetic defect is autosomal recessive and has variable penetrance.

In the most severe form of 21-hydroxylase deficiency, the newly born female infant is simply virilized (ambiguous geni-talia) or is virilized and suffers from life-threatening salt wast-ing (Box 36.1). However, milder forms are more commonand can appear at puberty or even later in adult life. A mild deficiency of 21-hydroxylase is frequently associated with terminal body hair, acne, subtle alterations in menstrual cycles, and infertility.

·               Virilized (ambiguous genitalia), or virilized and has life-threatening salt wasting

·               Patients can also have sonographic evidence of polycystic-appearing ovaries.

·               History of pubic hair growth occurring before the onset of breast development may be a clinical clue.

Treatment of CAH is aimed at restoring normal corti-sol levels. In CAH, cortisol production is reduced secondary to enzymatic block. This decreased cortisol production results in a compensatory increase in ACTH secretion to attempt to stimulate cortisol production. This increased ACTH production results in the oversecretion of precur-sor molecules proximal to the enzymatic block, which results in oversecretion of androgens. In patients with a high-grade enzymatic block, inadequate amounts of glu-cocorticoids and mineralocorticoids are made, resulting in salt loss, which can be life-threatening. Nonclassic CAH canbe managed easily by supplementing glucocorticoids. Usually,prednisone, 2.5 mg daily (or its equivalent), suppresses adrenal androgen production to within the normal range. When this therapy is instituted, facial acne usually clears promptly, ovulation is restored, and there is no new termi-nal hair growth.

Medical therapy for adrenal and ovarian disorders cannot resolve hirsutism. It can only suppress new hair growth. Hairthat is present must be controlled by shaving, bleaching, using depilatory agents, by electrolysis or laser hair ablation.

Cushing syndrome is an adrenal disease resulting in adrenalexcess. As a result of an adrenal neoplasm or an ACTH-producing tumor, the patient demonstrates signs of corti-costeroid excess that include truncal obesity, moonlike facies, glucose intolerance, skin thinning with striae, osteo-porosis, proximal muscle weakness in addition to evidence of hyperandrogenism, and menstrual irregularities.

Androgen-secreting adrenal adenomas cause a rapid in-crease in hair growth associated with severe acne, amenor-rhea, and sometimes virilization. In androgen-secreting adenomas, DHEA-S is usually elevated above 6 mg/mL. The diagnosis of this rare tumor is established by computed axial tomography (CAT) or magnetic resonance imaging (MRI) of the adrenal glands. Adrenal adenomas must be removed surgically. 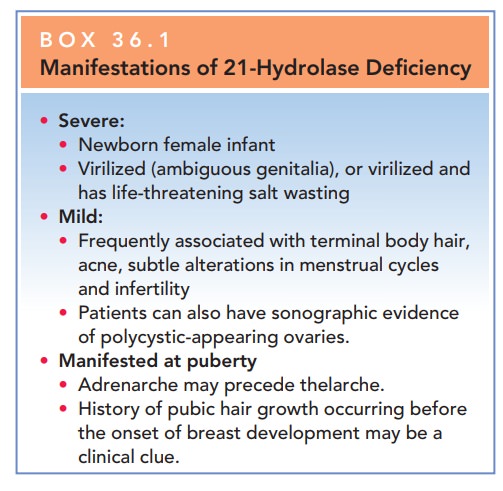