An optically active substance is one that rotates the plane of polarized light.

In general, organic molecules having a central carbon atom to which are attached four altogether different moieties, as C (WXYZ) thereby rendering the molecule asymmetric, are all optically active. Such types of molecules usually exist in two stereoisomeric forms as mirror images of each other. For example : 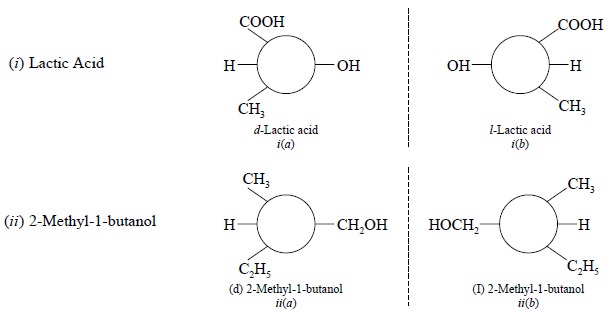 In the above cited example [i (a)] the rotation of the plane of polarization is to the right (clockwise), the lactic acid is dextrorotatory (Latin : dexter = right) designated by ‘d’ ; if the rotation is to the left (counterclockwise), the lactic acid [i (b)] is levorotatory (Latin : laevus = left) designated by ‘1’. In the same vein, the example [ii (b)] represents 1-2 methy1-1-butanol ; a product derived from fusel oil.

Interestingly, in these two specific examples of lactic acid (d- ; and 1-isomers) and 2-methy-1-butanol (d- ; and 1-isomers) one criterion is common i.e., the two mirror images are not superimposable. In other words, such compounds whose mirror images display non-superimposability exhibit optical activity. Furthermore, in the particular instance of C (WXYZ) it may be observed that the molecule whose mirror-image is not just another identical molecule but gives rise to a molecule of an altogether different isomeric compound. Thus, a pure sample of a single enantiomer must fulfil the following three important characteristic features, namely :

(a) No molecule can serve as the mirror image of another molecule,

(b) Exact cancelling out of rotations (of plane of polarized light) do not occur, and

(d) Net result is offered in terms of the ‘optical activity’.

Superimposability and Loss of Optical Activity :

In a situation where molecules exist as C (W2XY), that is when two of the four groups become identical, as may be observed in bromochloromethane and isopropylchloride as shown below :

It may be observed clearly that the two mirror images are superimposable and hence they do not exhibit any optical activity.