As shown in the picture, a flowering plant consists of two main parts. They are, 1. Root system. 2. Shoot system

Our body is made up of many organs. Similarly the plant body is also made up of several organs such as root, stem leaves and flowers. Plants are of many forms and many colours, yet they are alike in some manner. That is, they all have stems and leaves above the ground which we can see easily and roots below the ground.

As shown in the picture, a flowering plant consists of two main parts. They are,

Let us learn about these in detail. 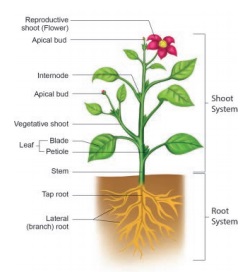 The underground part of the main axis of a plant is known as root. It lies below the surface of the soil. Root has no nodes and internodes. It has a root cap at the tip. A tuft of root hairs is found just above the root tip. Roots are positively geotropic in nature. Plants root system is classified into two types. 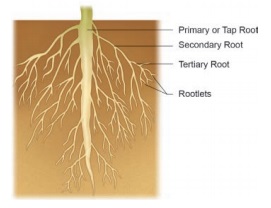 It consists of a single root, called taproot, which grows straight down into the ground. Smaller roots, called lateral roots arise from the taproot. They are seen in dicotyledonous plants.

It consists of a cluster of roots arising from the base of the stem. They are thin and uniform in size. 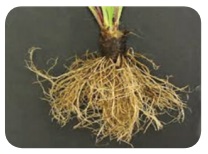 Functions of the Root

* Fixes the plant to the soil.

* Absorbs water and minerals from the soil.

* Stores food in some plants like Carrot and beet root. 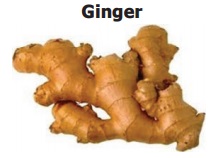 Is it a Root or stem?

Answer: It is stem.

Aim:- To observe absorption of water by root

What you need? A carrot, a glass of water and blue ink.

What to do? Place a carrot in a glass of water with a few drops of blue ink. Leave the carrot in water for two to three days. Then cut the carrot into half length wise and observe.

What do you learn? Blue colour appears in carrot which indicates water moves up wards in the carrot showing that root conducts water.

The aerial part of the plant body above the ground is known as the shoot system. Main axis of the shoot system is called the stem. The shoot system consists of stem, leaves, flowers and fruits. Stem grows above the soil, and it grows towards the sunlight. It has nodes and internodes. Nodes are the parts of stem, where leaf arises. The part of the stem between two successive nodes is called internode. The bud at the tip of the stem is known as apical or terminal bud, and the buds at the axils of the leaves are called auxiliary buds. 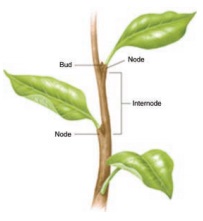 What you need? A small twig of balsam plant, a glass of water and a few drops of red ink

What to do? Place the small twig in the water with red ink.

What do you see? The stem be-comes reddish.

What do you learn? This is because red coloured water is being taken by the stem upwards.

Functions of the stem

* transports the prepared food  from leaves to other parts through stem.

* stores food as in the case of sugarcane.

Structure of a leaf

The leaf is a green, flat expanded structure borne on the stem at the node.

A leaf has a stalk called petiole. The flat portion of the leaf is called leaf lamina or leaf blade. On the lamina, there is a main vein called midrib. Other veins are branchout from mid rib. The portion of the leaf connected in the nodal region of the stem is known as the leaf base. Leaves of some plants possess a pair of lateral outgrowth on the base, on either side of auxiliary bud. These are called stipules.

The green colour of the leaf is due to the presence of green coloured pigment called chlorophyll. On the lower side of the leaf there are tiny pores or openings known as stomata.

Functions of the leaf

* Prepare food by the process of photosynthesis.

Victoria amazonica, the leaves of this plant grow up to 3 metres across. A mature Victoria leaf can support an evenly distributed Load of 45 Kilograms or apparently young person. 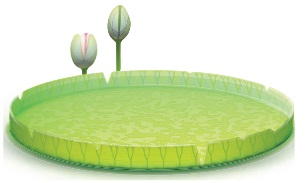