1. Plants which produce characteristic pneumatophores and show vivipary belong to

2. Mycorrhizae are the example of

4. Which of the following is correctly matched?

5. An association of individuals of different species living in the same habitat and having functional interactions is

6. Roots play in significant role in absorption of water in

7. If we uncover half of the forest covering the earth, what crisis will be produced at most and the first?

a. Some species will be extinct

b. Population and ecological imbalance will rise up

d. Rest half forests will maintain this imbalance.

8. Most animals are tree dwellers in a

9. Cuscuta is an example of

a) Active co-operation between two species

b) Two different parasites on the same host

c) Sharing of one or more resources between the two species

12. Which one of the following pairs is mismatched?

13. Which ecosystem has the maximum biomass?

14. Which of the following would appear as the pioneer organisms on bare rocks?

15. In which of the following both pairs have correct combination?

16. Secondary succession takes place on / in

17. In an ecosystem the rate of production of organic matter during photosynthesis is termed as

18. Natural reservoir of phosphorous is

19. Secondary productivity is rate of formation of new organic matter by

20. Which one of the following processes during decomposition is correctly described?

a) Catabolism – Last step in the decomposition under fully anaerobic condition

c) Fragmentation – Carried out by organisms such as earthworms.

d) Humification – Leads to the accumulative of a dark coloured substance humus which undergoes microbial action in a very fast rate.

21. Which one of the following is not a functional unit of an ecosystem?

22. The upright pyramid of number is absent in

23. The rate of formation of new organic matter by rabbit in a grassland is called

24. The second stage of hydrosere is occupied

25. Which one of the following is a characteristic feature of cropland ecosystem?

b) Absence of soil organisms

26. Most animals that live in deep oceanic waters are

a) The changes lead to a community that is in near equilibrium with the environment and is called pioneer community.

b) The gradual and predictable change in species composition occurs in a given area.

c) The establishment of a new biotic community is very fast in its primary phase.

d) The number and types of animals remain constant.

28. The mass of living material at a trophic level at a particular time is called

29.Match the following and select the correct option

(I) Earthworm (i) pioneer species

30. Given below is a simplified model of phosphorous cycling in a terrestrial ecosystem with four blanks (A – D. Identify the blanks. 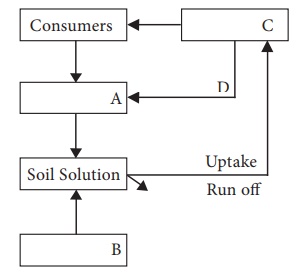 31. If 20 J of energy is trapped at producer level, then how much energy will be available to peacock as food in the following chain?

32. Given below is an imaginary pyramid of numbers. What could be one of the possibilities about certain organisms at some of the different levels ? 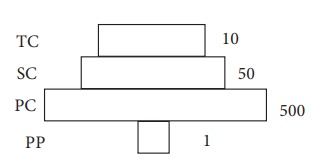 a) Level one PP is ‘pipal trees’ and the level SC is ‘sheep’.

33. Which one of the following statements for pyramid of energy is incorrect, whereas the remaining three are correct?

a) It is upright in shape

b) Its base is broad

d) It is inverted in shape

34. Which one of the following animals may occupy more than one trophic levels in the same ecosystem at the same time?

35. Both hydrarch and xerarch successions lead to

36. Of the total incident solar radiation the proportion of PAR is

37. The breakdown of detritus into smaller particles by earthworm is a process called

38. The biomass available for consumption by the herbivores and the decomposers is called

39. The correct sequence of plants in a hydrosere is

i) Removal of 80% tigers from an area resulted in greatly increased growth of vegetation.

ii) Removal of most of the carnivores resulted in an increased population of deers.

iii) The length of food chains is generally limited to 3 – 4 trophic levels due to energy loss.

iv) The length of food chains may vary from 2 to 8 trophic levels.

Which two of the above statements are correct?

42. Which one of the following is not used for construction of ecological pyramids?

b) Number of individuals

43. The UN Conference of Parties on climate change in the year 2012 was held at

44. Which of the following are most suitable indicators of SO2 pollution in the environment?

45. Which of the following is not one of the prime health risks associated with greater UV radiations through the atmosphere due to depletion of stratospheric ozone?

a. Damage to eyes

46. A location with luxuriant growth of lichens on the trees indicates that the

a. trees are very healthy

b. trees are heavily infested

d. location is not polluted.

47. The ozone of atmosphere in which the ozone layer is present is called

48. Which one of the following is a wrong statement?

a. Most of the forests have been lost in tropical areas.

b. Ozone in upper part of atmosphere is harmful to animals.

d. Eutrophication is a natural phenomenon in freshwater bodies.

49. Good ozone is found in the

50. Chipko movement was launched for the protection of

53. Which country has the greatest contribution for the hole formation in ozone layer?