1. What is the criterion for DNA fragments movement on agarose gel during gel electrophoresis?

a) The smaller the fragment size, the farther it moves.

d) The larger the fragment size, the farther it moves.

2. Stirred-tank bioreactors have been designed for

a) Purification of product.

b) Addition of preservatives to the product

c) Availability of oxygen throughout the process

3. Which of the following is not a component of downstream processing?

4. Which of the following is not a feature of the plasmids?

5. Which of the following is not required for nay of the techniques of DNA fingerprinting available at present?

6. Which vector can clone only a small fragment of DNA?

a) Insertional inactivation of alpha galactosidase in recombinant bacteria.

b) nactivation of glycosidase enzyme in recombinant bacteria.

8. During the process of isolation of DNA, chilled ethanol is added to

b) Break open the cell to release DNA

d) Remove proteins such as histones.

9. For transformation, micro-particles coated with DNA to be bombarded with gene gun are made up of

a) Silver or platinum

b) Platinum or zinc

10. Biolistics (gene-gun) is suitable for

b) transformation of plant cells

11. Genetic engineering is possible because

a) phenomenon of transduction in bacteria understood

b) we can see DNA by electron microscope

d) restriction endonuclease purified from bacteria can be used invitro

a) Joining of two DNA fragments

14. In genetic engineering, gene of interest is transferred to the host cell through a vector. Consider the following four agents (1-4) in this regard and select the correct option about which one or more of these can be used as vectors

15. Given below is a sample of a portion of DNA strand giving the base sequence on the opposite strands. What is so special shown in it?

a) Palindromic sequence of base pairs

d) Start codon at the 5’end

16. There is a restriction endonuclease called EcoRI. What does “co” part in it stand for ?

17. The figure below is the diagrammatic representation of the vector pBR322. Which one of the given options correctly identifies its certain components? 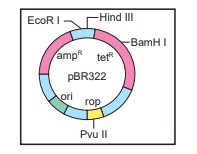 18. A mixture containing DNA fragments a,b,c,d with molecular weights of a+b=c, a>b and d>c, was subjected to agarose gel electrophoresis. The position of these fragmets from cathode to anode sides of the gel would be

19. An analysis of chromosomal DNA using the southern hybridisation technique does not use

21. Which one of the following palindromic base sequence in DNA can be easily cut at about the middle by some particular restriction enzyme?

22. Silencing of mRNA has been used in producing transgenic plants resistant to

23. Some of the characteristics of Bt cotton are

a) Does not require chemical fertilisers and growth hormones

b) Gives high yield and is rich in vitamin A

25. Consumption of which one of the following foods prevent the kind of blindness associated with vitamin A deficiency?

b) without cell wall

27. A technique of micropropagation is

28. To obtain virus-free healthy plants from a diseased one by tissue culture technique, which part/parts of the diseased plant will be taken?

a) Apical meristem only

c) Both apical and axillary meristems

29. Cellular totipotency was demonstrated by

30. Tissue culture technique can produce infinite number of new plants from a small parental tissue. The economic importance of the technique is raising.

a) genetically uniform population identical to the original parent.

31. Which of the following statements is not true about somatic embryogenesis?

a) The pattern of development of a somatic embryo is comparable to that of a zygotic embryo.

b) Somatic embryos can develop from microspores.

c) Somatic embryo is induced usually by an auxin such as 2, 4-D.

d) A somatic embryo develops from a somatic cell.

32. Which one of the following is a case of wrong matching?

b) Vector DNA - Site for tRNA synthesis - in vitro

33. Polyethylene glycol method is used for

d) gene transfer without a vector.

35. The technique of obtaining large number of plantlets by tissue culture method is called

36. Coconut milk is used in tissue culture in which present

37. Haploid plants can be obtained by culturing.