Plain Film of the Abdomen: Technique and Normal Imaging

The most common plain radiograph of the abdomen is an anteroposterior (AP) view with the patient in supine position.

The most common plain radiograph of the abdomen is an an-teroposterior (AP) view with the patient in supine position. The AP view of the abdomen is also called by the acronym KUB film because it includes the kidneys, ureters, and bladder. When acute abdominal disease is suspected clinically, an erect film of the abdomen and a posteroanterior (PA) view of the chest are also required. Digital imaging is becoming more common, and abdominal images may be viewed on a com-puter monitor rather than on films.

The abdomen is composed primarily of soft tissue. The density of soft tissue is similar to the density of water, and the difference in density between solid and liquid is not distinguishable on a plain radiograph. The liver is a homogeneous structure located in the right upper quadrant; the hepatic angle de-lineates the lower margin of the posterior portion of the liver (Figure 8-1). In the left upper quadrant, a similar an-gular structure, the splenic angle, can be identified by the fat shadow around the spleen (see Figure 8-1). 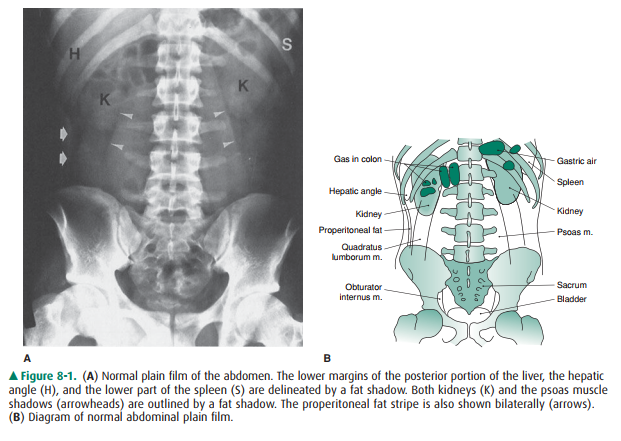 Organ enlargement can be recognized by the effect of dis-placement on nearby bowel loops or by obliteration of the adjacent normal fat or gas pattern. Hepatomegaly may com-press the proximal transverse colon below the right kidney. Splenomegaly may push the splenic flexure of the colon downward. A large fused renal shadow across the psoas mus-cle and lumbar spine suggests a horseshoe kidney.

Fat density, which is between that of soft tissue and that of gas, outlines the contour of solid organs or muscles. In obese patients, fat may not be distinguishable from ascitic fluid on plain abdominal film. The flank stripe, also called the properitoneal fat stripe, is a line of fat next to the muscle of the lateral abdominal wall (see Figure 8-1). The flank stripes are symmetrically concave or slightly convex in obese people and are located along the side of the abdominal wall. The normal properitoneal fat stripe is in close proximity to the gas pattern seen in the ascending or descending colon. Widening of the distance between the properitoneal fat stripe and the ascending or descending colon suggests fluid, such as abscess, ascitic fluid, or blood within the paracolic gutter.

Gas has the lowest density (radiolucency) in the abdomen. It is seen in the stomach and colon, but it is rarely seen in the nor-mal small bowel because the air rapidly traverses the organ. Presence of more than a minimal amount of gas in the small bowel should be considered abnormal and is indicative of a functional ileus or mechanical obstruction. Identification of the differences between the gas shadows of the jejunum, ileum, or colon helps to assess the location of bowel obstruc-tion (Figure 8-2). A gas pattern in distended intestinal loops is usually limited above the point of mechanical obstruction, but functional ileus has a more diffuse distribution in both the small intestine and the colon. If the gas shadow in the in-testine is displaced to an unusual location, a soft-tissue mass, either inflammatory or neoplastic, may be suspected. The presence of air-fluid levels in a distended small intestine onupright films suggests either functional ileus or mechanical obstruction. Fluid levels within the stomach or colon are or-dinarily of no pathologic importance, because fluid may be introduced by oral agents or by cleansing enemas. The pres-ence of solid material with a mottled appearance and small bubbles of gas surrounded by the colonic contour suggests feces in the colon.

A large amount of gas seen in the peritoneal cavity indi-cates postoperative status or bowel perforation. Air bubbles in the peritoneal cavity indicate a perforated viscus, abscess, or necrotic tumor. In the right upper quadrant, air that is seen in the biliary tree or around the gallbladder suggests cholecystoenteric fistula or emphysematous cholecystitis. A finely arborizing gas pattern over the right upper quadrant that extends peripherally to the edge of the liver is character-istic of hepatic portal vein gas. In the bowel wall, multiple air bubbles may indicate pneumatosis cystoides intestinalis. Ex-traluminal gas also may appear within the retroperitoneal structures, including the lesser omental bursa, a subhepatic site, the paraduodenal fossa, and the pericecal or periappen-diceal areas. A gas pattern seen below the bony pelvis indicates an inguinal or femoral hernia. 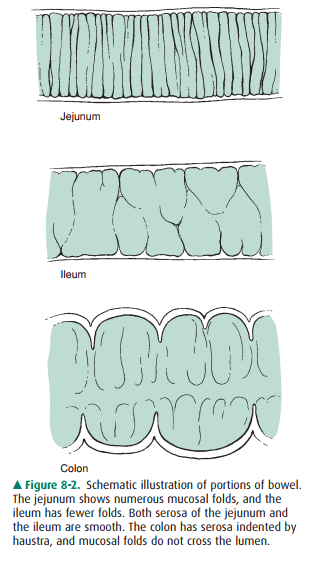 Bony structures or calcifications have the highest density (ra-diopacity) that is seen on the plain film. Bony structures comprise the ribs superiorly, the lumbar spine, and the pelvis. Calcifications in the abdomen include calcified arteries, calculi in the urinary or biliary tract, prostatic calculi, pancreatic calcifications (which are usually indicative of chronic pancre-atitis, with or without carcinoma), appendicolith, or ectopic gallstone in the small bowel associated with mechanical ob-struction from gallstone ileus. Some foreign bodies, including ingested foreign bodies, bullets, or surgical clips, may be seen in the abdomen. Other rare structures, such as parasitic, metastatic, or heterotopic bone formations, also may be seen in the abdomen.

Suspicion of urinary calculi is a indication for abdominal radiography. About one-half of calculi in the urinary tract that are shown on unenhanced helical CT can be detected on plain abdominal films. On the other hand, about 15% of gallstones are radiopaque and are seen on abdominal plain radiograph. Ultrasonography is the better choice in evaluat-ing gallstones.