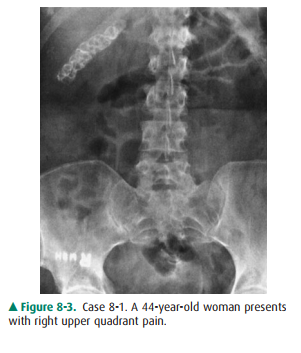 D.   Milk-of-calcium bile in the gallbladder 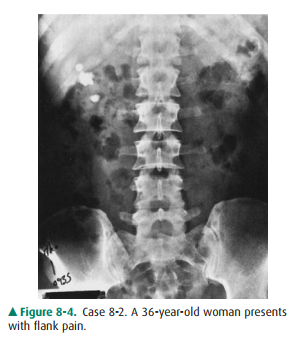 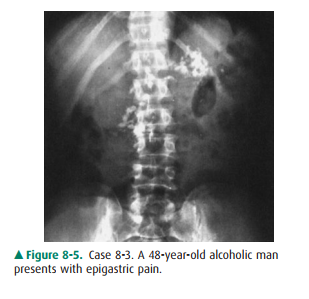 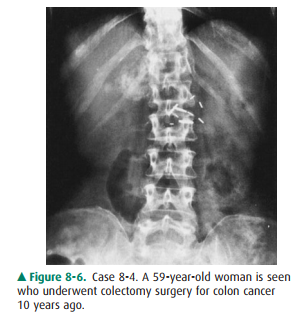 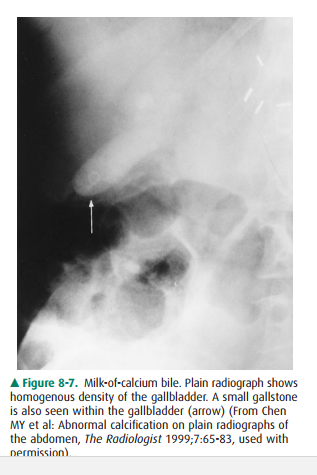 8-1. This case demonstrates multiple faceted calcifications in the right upper quadrant that are characteristic for gallstones (B is the correct answer to Question 8-1).

8-2. This case shows three separate deposits of calcified density confined to the right renal shadow. The largest one measures 2 cm in greatest diameter (C is the correct answer to Question 8-2).

8-3. This case shows multiple stippled calcifications in the upper abdomen adjacent to the lumbar spine. In a pa-tient with a history of alcoholism, pancreatic calcifica-tion from chronic pancreatitis would be the most likely diagnosis (C is the correct answer to Question 8-3).

8-4. This case shows stippled and discrete calcifications overlying the right twelfth rib, just above the renal outline. When calcification in the lung base, skin, retroperitoneum, pancreas, kidney, and adrenal glands is excluded, hepatic calcification should be considered in a patient with a history of colon cancer (B is the correct answer to Question 8-4).

About 15% to 20% of gallstones are calcified sufficiently to be seen on plain abdominal film. Most gallstones comprise mixed components, including cholesterol, bile salts, and bil-iary pigments. Pure cholesterol and pure pigment stones are uncommon. Calcified gallstones vary in size and shape. Most gallstones have thin, marginal calcification with central lu-cency and are laminated, faceted, or irregular in shape. Some gallstones contain gas in their fissures, whether calcified or noncalcified. Milk-of-calcium or “limy” bile occurs in pa-tients with long-standing cystic duct obstruction. The bile contains a high concentration of calcium carbonate and is densely radiopaque on plain radiograph (Figure 8-7). Calcifi-cation of the gallbladder wall (porcelain gallbladder) devel-ops in patients with chronic cholecystitis, cholelithiasis, and cystic duct obstruction. Porcelain gallbladder is characterized by curvilinear calcification in the muscular layer of the gall-bladder mimicking a calcified cyst (Figure 8-8). In general, ultrasonography is the primary modality now used to evalu-ate the gallbladder (Figure 8-9). 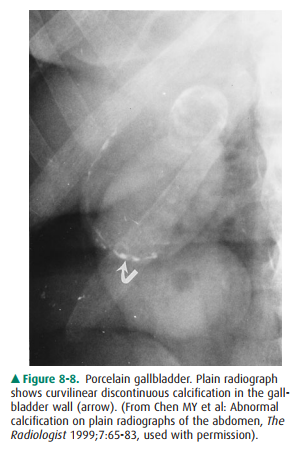 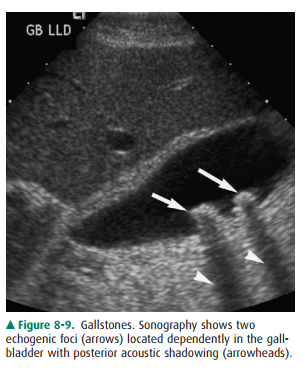 Nephrolithiasis is the most common cause of calcification within the kidneys. Most renal calculi (85%) contain calcium complexed with oxalate and phosphate salts. Any process that creates urinary tract stasis may cause the development of uri-nary calculi. Renal calculi are usually small and lie within the pelvicalyceal system or in a calyceal diverticulum. They may remain and increase in size, or they may pass distally. When calcifications are seen projecting over the renal shadows on routine films of the abdomen, an oblique view may be obtained to localize the densities in relation to the kidneys. A staghorn calculus contains calcium mixed with magnesium, ammo-nium, and phosphate and forms in the environment of recur-rent urinary tract infection with alkaline urine. CT is more sensitive than plain radiography in evaluating urinary calculi.

The adrenal gland is located at the superomedial part of the adjacent kidney. The right gland is lower than the left. 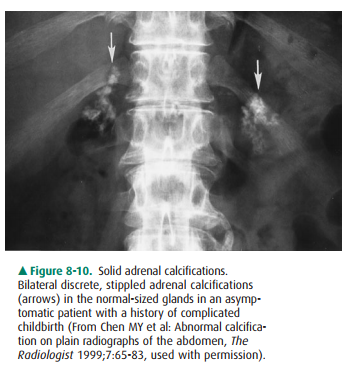 Hepatic calcifications are caused primarily by neoplasms, infections, or parasitic infestations. Primary hepatic tumors, both benign and malignant, may have calcifications. Colonic carcinoma and papillary serous cystadenocarcinoma of the ovary are the most frequent primary tumors causing calcified metastases in the liver. Other primary neoplasms in the thyroid gland, lung, pancreas, adrenal gland, stomach, kidney, and breast may cause calcified hepatic metastases. Inflammatory calcified granulomas related to tuberculosis or histoplasmosis are common in miliary calcifications. Calcified cystic lesions, such as Echinococcus disease in the liver, are commonly seen in areas of the world where the causative organism is endemic.