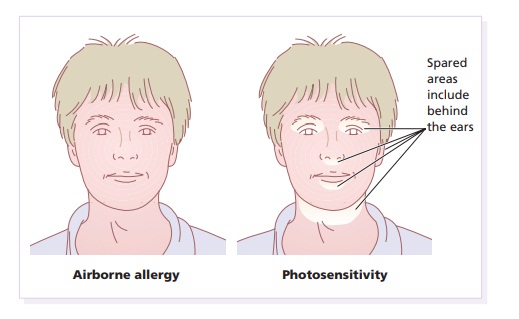 Drugs, topical or systemic, and chemicals on the skin, can interact with UVR and cause immunological reactions.

Drugs, topical or systemic, and chemicals on the skin, can interact with UVR and cause immunological reactions.

UVR converts an immunologically inactive form of a drug into an antigenic molecule. An immunological reaction, analogous to allergic contact dermatitis, is induced if the antigen remains in the skin or is formed there on subsequent exposure to the drug and UVR. Many of the same drugs that cause photo-toxic reactions can also cause photoallergic ones.

Photoallergy is often similar to phototoxicity. The areas exposed to UVR become inflamed, but the reaction is more likely to be eczematous. The eruption will be on exposed areas such as the hands, the V of the neck, the nose, the chin and the forehead. There is also a tendency to spare the upper lip under the nose, the eyelids and the submental region (Fig. 16.7). Often the eruption does not occur on the first expos-ure to ultraviolet, but only after a second or further exposures. A lag phase of one or more weeks is needed to induce an immune response. 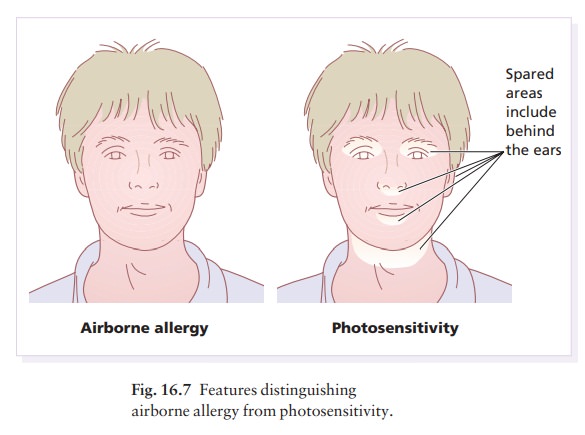 The original lesions are red patches, plaques, vesicles or bullae, which usually become eczematous. They tend to resolve when either the drug or the exposure to UVR is stopped, but this may take several weeks.

Some drugs, such as the sulphonamides, can cause a persistent light reaction .

Photopatch testing by an expert can confirm the diagnosis. The chemical is applied for 24 h and the skin is then irradiated with UVA. An acute photo-allergic contact dermatitis is then elicited. A control patch, not irradiated, rules out ordinary allergic con-tact dermatitis.

The drug should be stopped and the patient pro-tected from further ultraviolet exposure (avoidance,clothing and sunscreens). Potent topical corticos-teroids or a short course of a systemic corticoster-oid will hasten resolution and provide symptomatic relief.