Phenytoin is effective against all types of partial and tonic-clonic seizures, but not absence seizures. It is NOT indicated as first line therapy of febrile, hypoglycaemic, or other metabolic seizures.

■■Phenytoin is effective against all types of partial and tonic-clonic seizures, but not absence seizures. It is NOT indicated as first line therapy of febrile, hypoglycaemic, or other metabolic seizures.

■■Phenytoin is also used in the treatment of ventricular arrhythmias (especially digitalis-induced).

■■It may be effective in treating paroxysmal choreoathetosis, especially the kinesigenic type.

■■It is used alone or with other anticonvulsants to control paroxysmal pain in some patients with trigeminal neuralgia (tic douloureux).

■■  Fosphenytoin, mephenytoin, and ethotoin are other hydantoin anticonvulsants which are chemically related to phenytoin. The latter two are rarely used on account of serious adverse effects. Intravenous fosphenytoin loading has been used to treat quinidine-like conduction defects, bradyarrhythmias, or heart block, in tricyclic antidepressant overdose.

·              Phenytoin is reasonably well absorbed on oral administration. It is given intravenously in status epilepticus.* Intramuscular injection is not advisable since the drug gets precipitated at the site, and absorption is slow as well as erratic.

·              The major metabolite resulting from breakdown in the hepatic endoplasmic reticulum is a parahydroxyphenyl derivative which is inactive and is excreted initially in the bile, and later in the urine, after conjugation with glucuronide. Metabolism occurs primarily in the liver by para-hydroxy- lation to 5-(p-hydroxyphenyl)-5-phenyl-hydantoin (HPPH).

·              Protein-binding of phenytoin is impaired in the following situations : neonatal and elderly patients, late stages of pregnancy, hyperbilirubinaemia, liver disease, uraemia, burns, surgery, malnutrition (and other conditions causing hypoalbuminaemia), as well as combination therapy with salicylates, sulfonamides, valproic acid, and tolbutamide. In these settings, the total plasma concentration of pheny- toin may result in underestimation of the free fraction and inadvertent phenytoin toxicity. Therefore the exact deter- mination of the free phenytoin fraction is essential, which can be accomplished by serum ultrafiltration followed by gas chromatography or EMIT technology.

·              At therapeutic levels, elimination follows first-order  kinetics. Elimination half-life has been reported to be 7 to 60 hours. In overdose settings, saturation of the hepatic hydroxylation system occurs, and zero order kinetics predominate. Elimination follows a Michaelis-Menten model, with a prolonged t(1/2). As phenytoin is continually excreted, elimination changes from zero-order to first-order kinetics and drug levels decrease more rapidly. Toxicity may persist for 7 to 10 days.

·              Phenytoin acts on the motor cortex preventing the spread of seizure activity. It stabilises the threshold for hyperexcit- ability and reduces post-tetanic potentiation at synapses.

·              Chronic high blood levels may cause a “phenytoin encephalopathy” with increase in seizure frequency and the development of more tonic or opisthotonic components. Transient focal neurologic signs such as hemiparesis may be seen, especially in brain-damaged patients. 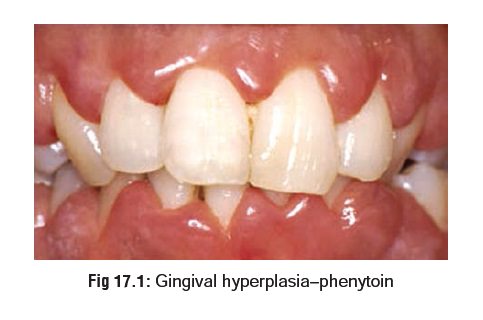 ·              Subcapsular cataract formation has been reported in chronic use with phenytoin.

·              Toxic hepatitis may occur leading to liver necrosis and chronic inflammation along with cholangitis, with chronic phenytoin use.

·              Renal dysfunction, possibly a hypersensitivity reaction to phenytoin, has also been reported with therapeutic use.

·              Hypersensitivity reactions are known to occur with pheny- toin and usually manifest as fever, rash, lymphadenopathy, and hepatosplenomegaly, 3 weeks to 3 months after initia tion of therapy. Such a reaction (phenytoin hypersensitivity syndrome) can be potentially fatal.

·     Purple glove syndrome has been reported followingintravenous phenytoin. It is a progressive develop-ment of limb oedema, discolouration, and pain after phenytoin administration (Fig 17.2), with some patients developing skin ulceration. Elderly patients and patients receiving large, multiple IV doses appear to be at greatest risk. 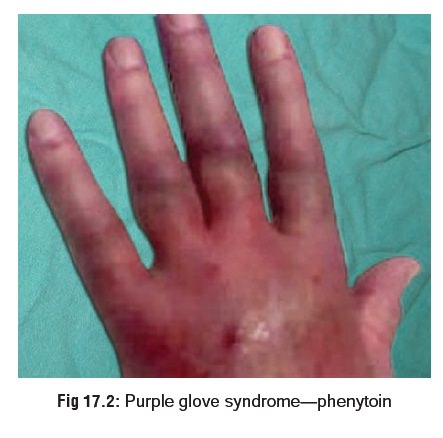 ·     Injectable phenytoin is very alkaline in nature with a pH of 12, and is therefore quite irritating to soft tissues if it extravasates during IV infusion. Cyanosis and oedema have occurred in some patients. Necrosis necessitating amputa-tion has also occurred from extravasation of undiluted intravenous phenytoin.

·     Arrhythmias and hypotension are associated with rapid intravenous infusions of phenytoin, and appear to be due to the diluent, propylene glycol.

·     Phenytoin is a known teratogen and can cause a number of defects in the newborn, together referred to as foetalhydantoin syndrome, (Table 17.1) (Fig 17.3). Severalstudies have reported a possible risk of birth defects with phenytoin, when used during the first trimester of pregnancy. Increased risk of neural-tube defects, cardio-vascular defects, oral clefts, and urinary tract defects have been reported. Phenytoin has also been linked with transplacental tumorigenesis of the kidney, ureter, and bladder, and neuroblastoma. 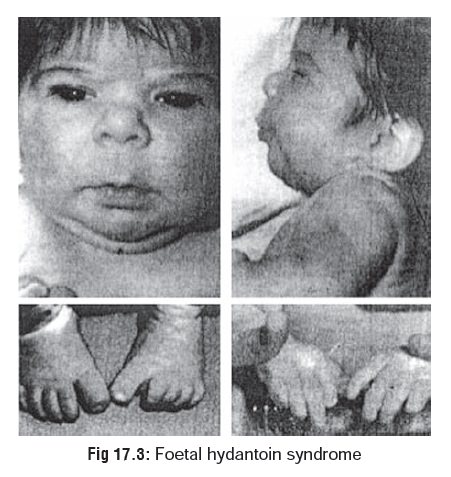 ·              Disulfiram has been reported to rapidly increase serum phenytoin concentration within four hours of the admin- istration of the first dose of disulfiram.

·              Phenytoin serum concentration has been reported to increase to a toxic level following the addition of fluvox- amine to the treatment regimen.

·     Phenytoin serum levels have been reported to decrease significantly when ciprofloxacin was added to the therapy regimen.

·     Phenytoin increases the metabolism of oestrogen and the production of sex hormone-binding globulin, via hydroxylation, thus decreasing the effectiveness of the contraceptives.

·              Hypotension appears to be common following intravenous phenytoin, and is concentration- and dose-related. Atrial and ventricular conduction depression and ventricular fibril-lation have been reported following high-dose infusionsof phenytoin. These effects are more typically reported in elderly or gravely ill patients.

·      Death is rare, and if it does occur it is invariably due to cardiac arrest or ventricular fibrillation.

·     Estimates of the minimal lethal dose are unreliable. Deaths are very rare even with massive acute oral overdosage and have been reported mostly with the relatively serious hypersensitivity reactions seen with chronic use. The lowest published lethal dose in a human child is 100 mg/kg.

o     Forced diuresis, peritoneal dialysis, and haemodialysis are generally ineffective. However, there are some reports on the successful use of charcoal haemoperfu-sion in the treatment of phenytoin overdose.