The phase contrast microscopy is based on the principle that small phase changes in the light rays, induced by differences in the thickness and refractive index of the different parts of an object, can be transformed into differences in brightness or light intensity.

Frits Zernike a Dutch Physicist invented the Phase Contrast Microscope and was awarded Nobel Prize in 1953. It is the microscope which allows the observation of living cell. This microscopy uses special optical components to exploit fine differences in the refractive indices of water and cytoplasmic components of living cells to produce contrast.

The phase contrast microscopy is based on the principle that small phase changes in the light rays, induced by differences in the thickness and refractive index of the different parts of an object, can be transformed into differences in brightness or light intensity. The phase changes are not detectable to human eye whereas the brightness or light intensity can be easily detected.

The phase contrast microscope is similar to an ordinary compound microscope in its optical components. It possesses a light source, condenser system, objective lens system and ocular lens system (Figure 2.1).

A phase contrast microscope differs from bright field microscope in having,

An annular aperture in the diaphragm is placed in the focal plane of the sub-stage which controls the illumination of the object. This is located below the condenser of the microscope. This annular diaphragm helps to create a narrow, hollow cone of light to illuminate the object.

The unstained cells cannot create contrast under the normal microscope. However, when the light passes through an unstained cell, it encounters regions in the cell with different refractive indexes and thickness. When light rays pass through an area of high refractive index, it deviates from its normal path and such light rays experience phase change or phase retardation (deviation). Light rays pass through the area of less refractive index remain non-deviated (no phase change). Figure 2.3 shows the light path in phase contrast microscope 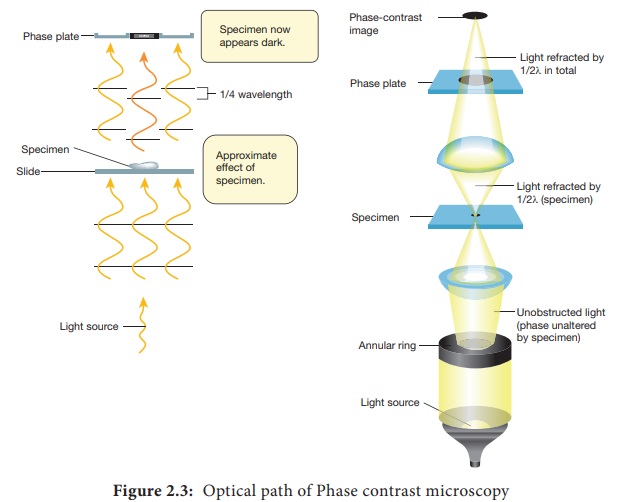 The difference in the phases between the retarded (deviated) and un-retarded (non-deviated) light rays is about ¼ of original wave length (i.e., λ/4). Human eyes cannot detect these minute changes in the phase of light. The phase contrast microscope has special devices such as annular diaphragm and phase plate, which convert these minute phase changes into brightness (amplitude) changes, so that a contrast difference can be created in the final image. This contrast difference can be easily detected by human eyes.

In phase contrast microscope, to get contrast, the diffracted waves have to be separated from the direct waves. This separation is achieved by the sub-stage annular diaphragm.

The annular diaphragm illuminates the specimen with a hollow cone of light. Some rays (direct rays) pass through the thinner region of the specimen and do not undergo any deviation and they directly enter into the objective lens. The light rays passing through the denser region of the specimen get regarded and they run with a delayed phase than the non-deviated rays. Both the deviated and non deviated light has to pass through the phase plate kept on the back focal plane of the objective to form the final image. The difference in phase (Wavelength) gives the contrast for clear visibility of the object. Figure 2.4 Microscopic image comparing phase and bright field microscopy. 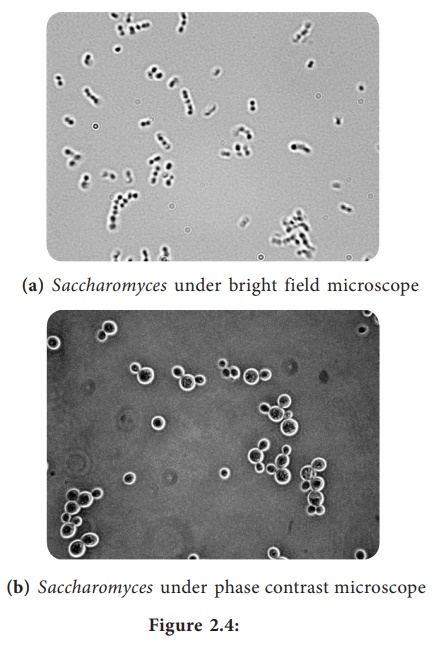 Whenever light (or any wave in general) goes from one medium to another, some of the energy of the wave is “reflected” back through the first medium cut the same angle as the incident wave and some of the energy is refracted (bent). Through the second medium when light goes from a low refractive index medium to a high refractive index medium such as air to water the reflection undergoes a 180° phase change. Light waves that are in phase (that is, their peaks and valleys exactly coincide) reinforce one another and their total intensity increases.

• It is used to examine various intracellular components of living cells at relatively high resolution.

• It helps in studying cellular events such as cell division.

• It is used to visualize all types of cellular movements such as chromosomal and flagellar movements..