Muscle relaxants have some value for relief of spastic muscle disorders, that is, a state of increased muscle tone that results from an imbalance between central and spinal control of muscle tone.

Muscle relaxants have some value for relief of spastic muscle disorders, that is, a state of increased muscle tone that results from an imbalance between central and spinal control of muscle tone. Spasticity is the result of a general release from supraspinal control and is charac-terized by heightened excitability of α- and γ-motor sys-tems and the appearance of primitive spinal cord re-flexes. Treatment is difficult, since relief often can be achieved only at the price of increased muscle weakness.

Baclofen appears to affect the neuromuscular axis by acting directly on sensory afferents, γ-motor neurons, and collateral neurons in the spinal cord to inhibit both monosynaptic and polysynaptic reflexes. The principal effect is to reduce the release of excitatory neurotrans-mitters by activation of presynaptic GABAB receptors. This seems to involve a G protein and second-messen-ger link that either increases K+ conductance or de-creases Ca++ conductance.

Baclofen is rapidly and effectively absorbed after oral administration. It is lipophilic and able to penetrate the blood-brain barrier. Approximately 35% of the drug is excreted unchanged in the urine and feces.

Baclofen is an agent of choice for treating spinal spastic-ity and spasticity associated with multiple sclerosis. It is not useful for treating spasticity of supraspinal origin. Doses should be increased gradually to a maximum of 100 to 150 mg per day, divided into four doses.

Side effects are not a major problem, and they can be minimized by graduated dosage increases. They include lassitude, slight nausea, and mental disturbances (in- cluding confusion, euphoria, and depression). The drowsiness is less pronounced than that produced by diazepam—an important therapeutic advantage. Hypo-tension has been noted, particularly following overdose. Elderly patients and patients with multiple sclerosis may require lower doses and may display increased sen-sitivity to the central side effects. Baclofen may increase the frequency of seizures in epileptics.

Benzodiazepines also possess muscle relaxant activity. Diazepam (Valium) has been used for control of flexor and extensor spasms, spinal spasticity, and multiple scle-rosis. The muscle relaxant effect of the benzodiazepines may be mediated by an action on the primary afferents in the spinal cord, resulting in an increased level of presynaptic inhibition of muscle tone. Polysynaptic re-flexes are inhibited. The most troublesome side effect is drowsiness, which is dose dependent. Tolerance to both the therapeutic effects and the side effects develops.

Dantrolene sodium (Dantrium) is used in the treatment of spasticity due to stroke, spinal injury, multiple sclero-sis, or cerebral palsy. It is also the drug of choice in pro-phylaxis or treatment of malignant hyperthermia. Susceptibility to malignant hyperthermia is due to a rare genetic defect that allows Ca++ release from the sarcoplasmic reticulum to open more easily and close less readily than normal. This leads to a high level of Ca++ in the sarcoplasm, which produces muscle rigidity, oxygen consumption, and heat. Dantrolene acts by blocking Ca++ release from the sarcoplasmic reticulum and uncoupling excitation from contraction.

Dantrolene is active orally, although its absorption is slow and incomplete. Its biological half-life (t1/2) is 8.7 hours in adults. The drug is metabolized by liver micro-somal enzymes and is eliminated in the urine and bile. It is given IV when treating an attack of malignant hy-perthermia.

The most prominent and often limiting feature of dantrolene administration is dose-dependent muscle weakness. Other side effects are drowsiness, dizziness, malaise, fatigue, and diarrhea. Symptomatic hepatitis is reported in 0.5% of patients receiving it and fatal hepa-titis in up to 0.2%. Contraindications include respira-tory muscle weakness and liver disease. It is suggested that patients on dantrolene therapy be given regular liver function tests.

The central skeletal muscle relaxants are a chemically diverse group of compounds that have limited utility in relieving the signs and symptoms of local muscle spasm. None has been shown to be superior to analgesic– antiinflammatory agents for the relief of acute or chronic muscle spasm, although all are superior to placebo. Most of these drugs have mild sedative prop-erties, and their muscle relaxant activity may be a direct result of sedation. Experimentally, all centrally active skeletal muscle relaxants preferentially depress spinal polysynaptic reflexes over monosynaptic reflexes.

Most of the agents have similar actions, and there-fore, the same adverse reactions are seen. These consist most commonly of drowsiness, dizziness, and light-head-edness. One agent, cyclobenzaprine (Flexeril), has a prominent anticholinergic component and frequently causes dryness of the mouth along with sedation and dizziness.In addition to being employed alone, many of these compounds are available in combination with a nonopi-oid analgesic, caffeine, or both. Because of their limited utility, they are not be considered individually. Some of the approved agents are listed in Table 28.1. 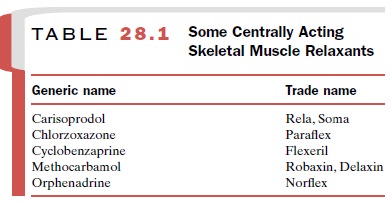