Depression of Postjunctional Response to Acetylcholine

α-Bungarotoxin (α-BTX), isolated from snake venom, is a protein that binds selectively and irreversibly to the AChR of muscle.

DEPRESSION OF POSTJUNCTIONAL RESPONSE TO ACETYLCHOLINE

α-Bungarotoxin (α-BTX), isolated from snake venom, is a protein that binds selectively and irreversibly to the AChR of muscle. Because binding of the toxin is irre-versible, recovery from α-BTX block indicates synthesis and insertion of new AChR into the membrane. Studies using -BTX show that the AChR is a glycoprotein con-sisting of five polypeptide subunits ( α, β, γ, δ, and ε). The complex is a cylindrical unit about 8 nm in diameter that spans the plasma membrane (Fig. 28.2). 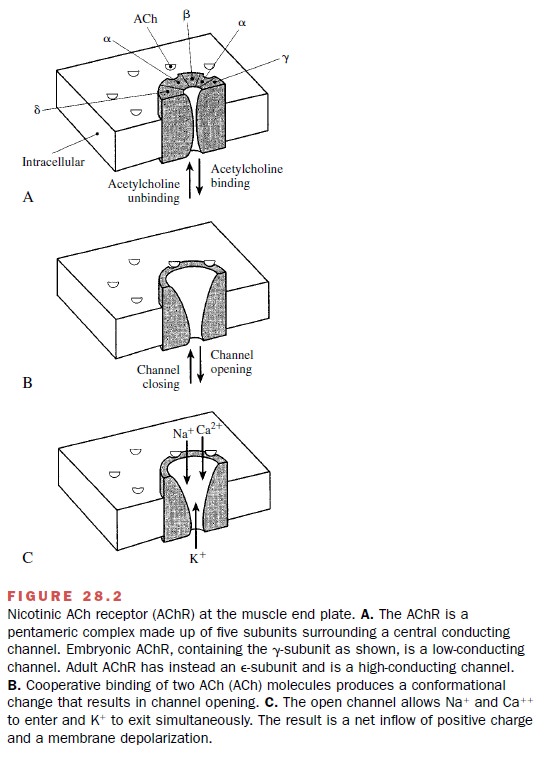 Histrionicotoxin, obtained from a Panamanian frog, is a toxin that attaches to a high-affinity site within the pore of the AChR complex and results in muscular blockade. Agents that have a similar effect include local anesthetics, barbiturates, and phencyclidine. They re-duce the flow of ions and shorten the duration of time the channel is open.

The AChR in muscle is distinct from the AChRs found in the central and autonomic nervous systems (neuronal AChRs). Although both are activated by nicotine, each is blocked by a different antagonist (e.g., α-BTX vs.κ -BTX).

The “acquired” form of myasthenia gravis (MG) is an autoimmune disease with an incidence approaching 1 in 10,000. It involves an antibody response against part of the -subunit of the AChR in muscle. This leads to degradation of AChRs, reduction of synaptic infoldings, and weakness due to diminished postjunctional re-sponse. Because anti-AChR antibodies are found in nearly 90% of MG patients, serum testing can serve as a diagnostic tool. MG is often found associated with ab-normalities of the thymus, which contains a protein that is immunologically related to muscle AChR.

Standard treatment consists of anti-AChE agents such as pyridostigmine, whose effect is long-lasting and pre-dictable. A short acting anti-AchE, such as edrophonium, can be used to differentiate between a myasthenic crisis (insufficient treatment) and a cholinergic crisis (overtreat-ment with anti-AChEs).Thymectomy is a good option for patients under 50 years of age. Immunosuppressive agents, such as corticosteroids and possibly azathioprine or cyclosporine A, are also effective. Plasmapheresis is beneficial, but the effect is transient.