Central nervous system (CNS) stimulation is the pri-mary action of a diverse group of pharmacological agents and an adverse effect associated with the admin-istration of an even larger group of drugs.

Central nervous system (CNS) stimulation is the pri-mary action of a diverse group of pharmacological agents and an adverse effect associated with the admin-istration of an even larger group of drugs. CNS stimula-tion consists of a range of behaviors including mild ele-vation in alertness, increased nervousness and anxiety, and convulsions.

In general, any hyperexcitability associated with drug administration (as either a desired or an undesired effect) results from an alteration in the fine balance nor-mally maintained in the CNS between excitatory and inhibitory influences. Thus, the bases for CNS stimula-tion by this class of drugs reside in adjusting the inte-gration of excitatory and inhibitory influences at the level of the individual neuron. An agent that induces CNS stimulation appears to act by one or more of the following mechanisms: (1) potentiation or enhance-ment of excitatory neurotransmission, (2) depression or antagonism of inhibitory neurotransmission, and (3) al-tered presynaptic control of neurotransmitter release.

Although the use of CNS stimulants (also known as analeptics or convulsants) has declined, certain com pounds within this category do possess some clinical utility. Historically, general CNS stimulants were used primarily as respiratory stimulants in the treatment of acute overdosage with CNS depressants (e.g., barbitu-rates). Several factors have contributed to the almost complete lack of use of CNS stimulants in this clinical situation. First, since the stimulants were not specific an-tagonists of the depressant agents, they frequently were not effective in reversing severe pharmacologically in-duced CNS depression. Second, the duration of action of the CNS stimulant was generally shorter than that of the depressant. Third, the dose of most CNS stimulants required to reverse severe CNS depression was quite close to the dose that produced convulsions and cardiac arrhythmias. In such cases, the CNS stimulant often ex-acerbated the clinical picture by producing severe life-threatening complications. Another factor contributing to the decline in CNS stimulant use for drug-induced CNS depression has been the development of generally safer procedures for patient management. Supportive measures (e.g., maintenance of a patent airway, eleva-tion of low blood pressure) often provide greater benefit to the patient than does the use of analeptic drugs.

Tolerance and abuse potential are additional problems associated with the use of such psychomotor stimulants as amphetamine and many of its congeners. 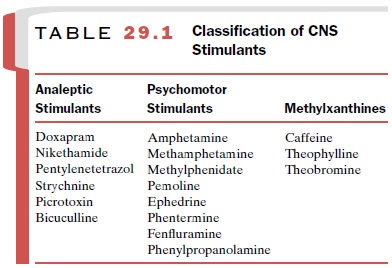 Compounds that possess as their primary action the stimulation of the CNS can be divided into three major categories (Table 29.1) based on either their proposed mechanism of action or their chemical structure. Each class of compounds is discussed in general terms, and in-dividual drugs are mentioned only as appropriate.