Pharmacodynamics is the study of the action of drugs on living organisms.

Pharmacodynamics is the study of the action of drugs on living organisms. Although alcohol may be theoretically introduced into the body via the rectum, intravenously or even by inhalation, the most common, and for all practical purposes the only, route is by ingestion.

Absorption of alcohol by the body

a Ingestion of alcohol

Alcohol is usually taken by mouth in one or other form and is absorbed into the body directly and unchanged by the process of diffusion. Alcohol, unlike other substances like sugars, is not chemically modified in any way before it is absorbed. The process of diffusion occurs through the mucous membranes (ie the membranes coating the inner surface of the stomach, intestines, etc) into the large network of capillary blood vessels in the alimentary canal.

The absorption of alcohol in the mouth and oesophagus is minimal and for practical purposes nil, because the alcohol passes rapidly through these structures. Absorption proceeds immediately in the stomach and small intestine. Approximately 20% of alcohol which is ingested is absorbed in the stomach, and the rest (80%) in the small intestine. Depending on the volume of alcohol ingested, a small quantity may reach the colon and be absorbed there. If alcohol is administered into the colon by means of an enema, the absorption there is also rapid and complete.

i  Anatomical and physical factors of importance

Alcohol absorbed by the stomach and small intestine is first absorbed into the blood and then distributed to all the organs. The following anatomical and physical factors determine not only the rate of absorption, but also the site of maximum absorption:

Surface of the mucous membrane

Absorption capacity of the mucous membrane

The mucous membrane of the small intestine has a better supply of blood vessels than that of the stomach, and therefore absorption in the small intestine is greater than in the stomach. Any condition which increases the blood supply in the mucous membrane will increase absorption, for example congestion and/or gastritis or dilatation of the capillaries by warm or hot liquids. The rate of absorption (diffusion) of alcohol depends on the concentration gradient between the alcohol in the stomach and the intestine, and the alcohol in the blood of the capillaries in the stomach and intestinal wall. The smaller the gradient, the slower the rate of absorption (Fick's law).

Using the above information as background it is possible to classify the relevant factors. We discuss them in some detail.

The peristaltic movement of the alimentary canal and the functional status of the stomach's pyloric sphincter. The forward propulsion of food is due to rhythmic contractions called peristaltic movements or peristalsis. A muscle forming a valve, the pyloric sphincter, is present at the stomach outlet. It is this valve which controls the flow of food out of the stomach and into the small intestine. Any condition which stimulates contraction of this valve will therefore slow down the rate of forward movement of food (and alcohol).

The greater the gastric motility and the more relaxed the pyloric sphincter, the more rapid the absorption of alcohol because the gastric contents (mixed with alcohol) pass more rapidly into the duodenum (the first part of the small intestine). Gastric motility is decreased by certain medicines, by very high alcohol concentrations (paralysis of the smooth muscle of the gastric wall) and in cases of nausea and shock. Gastric motility is increased by the intake of large volumes of food and/or liquids. The rate at which the stomach is emptied is increased by conditions of inflammation such as peptic ulcers, as these cause gastric irritation.

Irritating substances in the stomach cause the pyloric sphincter to contract and there is then a delay in the emptying of the stomach. Psychological factors such as anxiety may influence the function of the pyloric sphincter, but it is not possible to predict whether more or less alcohol will then be absorbed because this differs from person to person.

Thus, if the gastric contents are slowly released into the small intestine, absorption will be slower and over a longer period. Therefore the blood-alcohol level will not rise so high because the body will have more time to eliminate the alcohol already absorbed, in other words, it will be more able to cope with the absorbed alcohol.

The nature, composition, amount and strength of the beverage ingested. Optimal absorption of alcohol occurs when the beverage has an alcohol concentration of between 10% and 20%. The higher the concentration, the slower the absorption, because of the possible secretion of excessive mucus, spasm of the pyloric sphincter and/or suppression of gastric motility. Large volumes of beverage make contact with the mucous membranes over a larger area and also increase the gastric motility so that alcohol passes more rapidly into the small intestine. Absorption of the alcohol in beer is delayed because of the presence of carbohydrates in the beer. The alcohol in beverages that contain gas or to which diluents containing gas (carbon dioxide, bicarbonate) have been added, is absorbed faster. This is due to the distension of the stomach with gas, and therefore increasing the surface contact area due to flattening of the normal stomach folds, almost similar to an inflated balloon.

Warm beverages are absorbed faster than cold ones and hence also the alcohol in the beverage. This is due to an increase in the blood flow to the intestines.

To summarise: the most ``potent'' drink (if someone is crazy enough to drink it) will be a warm bottle of champagne (warm  -   absorbed faster than cold; bottle  -   large volume; champagne  -   contains gas and has an alcohol concentration between 10% and 20%)!

The contents of the alimentary canal. The absorption of alcohol from the stomach and small intestine is influenced by the nature and amount of their contents. Food ``dilutes'' alcohol and prevents contact between the alcohol and the mucous membrane. This is especially true of fatty foods and/or food with a high protein and/or carbohydrate (sugar) content. Certain foods, especially fats, delay the emptying of the stomach so that the food-alcohol mixture takes longer to reach the small intestine with its large absorptive surface. It therefore makes good sense not to drink on an empty stomach.

Medicines and other chemical substances. As mentioned above, various substances influence gastric and intestinal peristalsis and the activity of the pyloric sphincter, thus influencing the speed of absorption. This is a specialised field, and often used in courts as a line of defence; for this course it is sufficient to be aware of the possible role pharmaceutical substances may play.

b Absorption through the airways and lungs

Although absorption through the airways and lungs can be rapid, it is highly unlikely that significant blood concentrations will be reached, as the alcohol irritates the airways. The maximum blood concentration reached through inhalation is 0,02g%. People do not die of alcohol intoxication when they enter a wine tank, but they die of anoxia (absence of oxygen) or the accumulation of carbon dioxide (CO2).

c Absorption through the skin

Alcohol is not absorbed through an intact skin.

This route is theoretically possible.

There is common misconception that the clinical effect of alcohol intoxication is determined by the rate of absorption of alcohol. This is wrong; a specific alcohol level will correspond with a specific clinical effect, regardless of how rapidly that level was reached.

After absorption from the gastro-intestinal system, alcohol is distributed through the body via the blood circulation. Certain factors will affect the distribution:

Any increase in cardiac output, such as caused by exercise or excitement, will increase distribution.

b Water in tissues

Alcohol is water soluble. The water in an organ or tissue will therefore determine the amount of alcohol which can dissolve in that specific tissue. In tissues with a high water content more alcohol can dissolve. Males have (supposedly) a higher muscle mass than females; the latter have a higher fat content. Therefore males can redistribute more alcohol out of their blood into their extra-vascular areas (muscles). That is why, all other factors being equal, a male will have a lower blood-alcohol level than an identical female counterpart after absorption of the same amount of alcohol. This factor is also called the distribution factor or ``r'' factor in the Widmark formula (0,7 for males and 0,6 for females).

Metabolism and secretion of alcohol

About 85% to 90% of alcohol is metabolised by the liver. The enzyme, alcoholdehydrogenase (ADH), plays a major role in this process. The metabolites produced by this process include acetaldehyde, one of the causes of a hangover. The rest is secreted unchanged via the lungs, kidneys and perspiration. Alcohol is eliminated at a constant rate. The rate of elimination is between 0,01 and 0,02g% per hour. Usually the average (0,015g% per hour) is used, and this is called the B60 value.

The elimination rate is more or less constant for a given individual and is not affected by cold, exercise, sleep or any other factor, including drugs or injury. Liver disease does not have any effect, except at a very late stage when the patient is in hepatic failure. The concentration of the blood alcohol does not influence the elimination rate. In practice the rate will be constant regardless of whether the alcohol level is 0,10 or 0,20g%.

We can assume that approximately 60% of an ingested drink will be absorbed after 60 minutes and 90% after 90 minutes. Alcohol elimination starts the moment the alcohol is distributed through the body and reaches the liver. This happens at a constant rate.

As people seldom have only one drink, or gulp down many drinks in a matter of minutes as if in one dose, it is obvious that to plot a graph of someone's blood-alcohol level is not an easy task. Such a graph is called the blood-alcohol curve (fig 11.2). 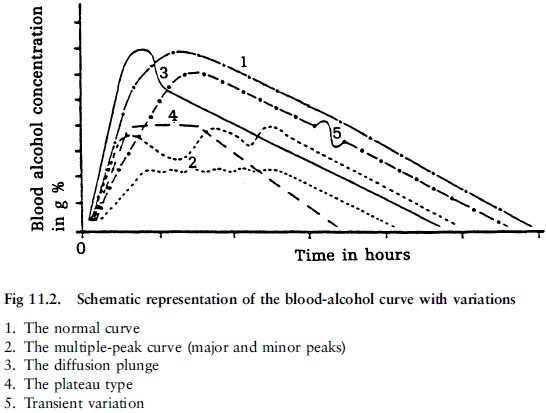 The ascending limb reflects that period when the absorption rate is higher than the elimination rate. The gradient depends on the rate of alcohol absorption, and the factors discussed above which may affect it.

The peak will depend on the amount of alcohol ingested. At this point the absorption rate equals the elimination rate. A number of drinks over a longer period of time will result in multiple peaks. A flatter curve with a plateau-like peak will result if alcohol is slowly absorbed after a fatty meal for instance. The peak is usually reached after 15 to 90 minutes, but not later than 2 hours.

The limb going down reflects the period when the elimination rate is higher than the absorption rate.

level will present a different clinical picture, depending on whether he/she is on the rising or declining limb of the curve. The degree of intoxication will be more pronounced on the rising than the declining limb because the brain will adapt to alcohol after a while due to the development of acute alcohol tolerance.