The effect that alcohol has on the psyche, both pleasant and unpleasant, is well-known.

The effect that alcohol has on the psyche, both pleasant and unpleasant, is well-known. What is less well-known is that alcohol, in different quantitiesfor different people, is a toxic drug. Alcohol has both an acute and chronic effect on various organs of the body, including the brain, heart, lungs, liver, the gastro-intestinal, genito-urinary and endocrine systems.

The damage that alcohol causes to the central and peripheral nervous systems is of particular importance when it comes to the driving of vehicles, as the following quote (Shaw: 1978) makes clear:

The exact mode of action of alcohol on the central nervous system is unclear and its study complex. The effects of acute administration of alcohol are often quite at variance with the effects of chronic administration and the effects caused by a steady blood-alcohol level are often very different from the effects caused by a changing blood-alcohol level. The rate of change may itself be an important factor. Individual variation on whatever basis it may rest is also important. Not only do we find that effects in the naõÈve subject are very different from effects in the alcohol sophisticate, but it is well known that all alcoholics do not suffer all the complications of alcoholism and indeed some suffer none.

It appears that alcohol modifies the quality of nerve-impulse transmission by stimulating the naturally occurring nerve-transmission inhibitor, GABA, (gamma-amino-butyric acid) in the grey matter of the brain. Drugs like Valium and barbiturates mimic this effect. Similarly, cross-tolerance between these drugs and alcohol, when one of them is used over a long period, is frequently observed. Furthermore, different types of nerve cells display different degrees of sensitivity to the effects of alcohol and these drugs.

The fact that we have stressed the complexity of the effects of alcohol on the body should make it clear that many factors, as yet poorly understood, could influence the response elicited by alcohol, and that extreme caution should be exercised before expressing any final opinion on individual behaviour and responses of the users of alcohol. In the early stages of intoxication it is the loss of the inhibitory effect exercised by the higher centres over the lower centres which accounts for the characteristic behavioural changes such as the feeling of euphoria and the excessive self-confidence which is out of all proportion to reality (Shaw: 1978).

It produces loss of emotional restraint and diminishes the inhibitions which civilisation imposes on human conduct. Because in a social environment many people become more active, both in speech and manner, it is widely (but incorrectly) regarded as a stimulant.

The effect of alcohol on the nervous system is, however, essentially depression of function, the extent of which depends on the amount of alcohol working in on the brain cells, and the susceptibility of these cells (or groups of cells) to alcohol. The cortical brain cells (responsible for the higher functions) generally display the effect of alcohol far sooner than those of the lower centres in the basal ganglia and the midbrain. As blood-alcohol and thus brain-alcohol levels rise, more functions of the nervous system are impaired, until co-ordination is drastically disturbed and unconsciousness ensues. Deathcould follow due to depression of the respiratory and later the circulatory control centres. It is said that alcohol is in fact the most powerful depressant of the central nervous system that is freely available without a doctor's prescription.

Furthermore, it seems as if alcohol prolongs recovery time of the retinal response, and this is probably due to a direct effect on the nerve cells of the retina.

In broad terms it can be said that the effect of alcohol on the highly developed frontal cortical regions of the brain (responsible, inter alia, for conscious thought) can be seen with blood-alcohol levels as low as 0,01%. This is manifested through altered judgment, talkativeness and lack of attention (Shaw: 1978).

Early behavioural effects are much modified by personality factors in the user and by the environmental situation in which drink is taken. In lively company, disinhibition is the rule. The drinker becomes less self-conscious, more talkative and less discreet. Judgment and restraint rapidly go and there is loss of emotional control, giving rise to the humorous observation that the super-ego is readily soluble in alcohol. As the blood level rises, thinking becomes slowed and superficial and learning and retention become faulty. Less attention is paid to stimuli so that internal stimuli such as hunger and pain are ignored, sometimes with dire consequences. It becomes more difficult to attend and respond to external stimuli. Events at the periphery are ignored and only the immediate situation is given attention. This impaired psychological state is usually accompanied by feelings of increased confidence and skill.

The detrimental effect on muscle activity is due to poor control by the central nervous system (and the decrease in impulse conduction and transmission) over the use and co-ordination of muscle potential, rather than to any direct impact on muscle strength itself.

The pharmacological effect of alcohol can be modified by a number of congenital and acquired factors, which could partly account for the different reactions of individuals to alcohol. One of these is the elimination rate.

Certain organic, functional and degenerative diseases could render the brain cells or parts of the brain more susceptible to the intoxicating effect of alcohol. Severe liver disease, such as alcoholic cirrhosis, can have a significant effect on the distribution and elimination of drugs, including alcohol, and this makes it difficult to predict how such a person will respond to alcohol or drugs in any dosage.

The clinical features of alcoholic intoxication are mainly caused by its effect on the intellect, voluntary movement, speech content, sensation, reflexes, cardio-vascular and gastrointestinal function.

It is customary to use various words and phrases such as ``intoxicated'', ``under the influence'', ``drunk'' and ``paralytic'' to describe various states which may follow upon the consumption of alcohol. These terms, as well as ``drunken driving'' and ``driving under the influence of intoxicating liquor'' are at times used erroneously, as if they have the same meaning.

It is suggested that the expression ``under the influence'' be used to describe any abnormal mental or physical condition which is the result of indulgence in any amount of alcohol, and which can range from a state that deprives the subject of ``that clearness of intellect and control which he would otherwise possess'' (Gradwohl 1954:971) to a state where death from alcohol poisoning may be at hand. An individual under the influence of alcohol could appear sober, that is, evidencing no noticeable effect at a routine clinical examination, even to the skilled observer.

The clinically intoxicated person could seemingly be:

These degrees are not clearly distinguishable, and rather represent a subtle progression of change in a broad spectrum of behavioural and functional patterns. They tend to correspond broadly to specific blood-alcohol concentrations, but wide variations are often seen between the clinical picture and the BAC (blood alcohol concentration). 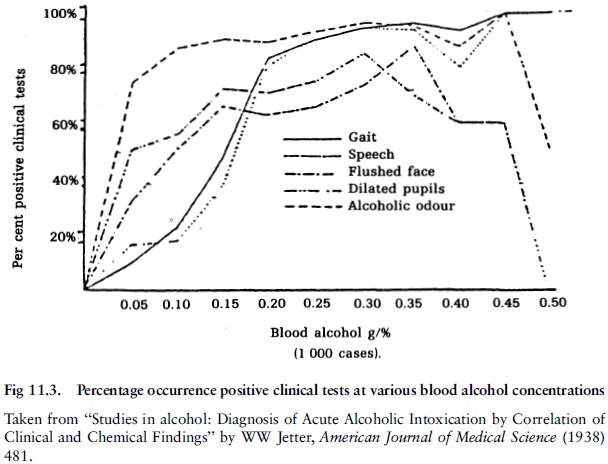 In individuals who are under the influence of alcohol but appear sober, blood-alcohol levels of up to 0,08g% are often found. Slight changes in neurological responses and behaviour compared to the individual's normal responses may be detected by means of special tests not normally used during the routine examinations, or by people who know the subject well. The measured impairment detected by special tests is relative to the subject's normal potential, and although not necessarily inferior to that of another sober person, is nevertheless sufficient to materially affect driving ability at levels of as low as 0,04g% or less. 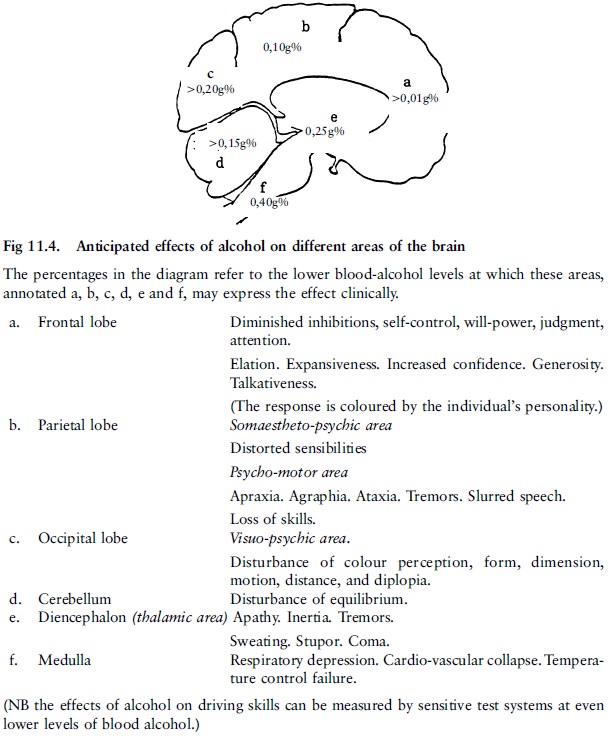 Clinically the subject may reveal signs of mental impairment, unco-ordinated movements and speech defects. The face may be flushed, the behaviour friendly, and the mood elevated. However, the reactions are often coloured by the person's personality and surroundings. Euphoria or depression, increased confidence, expansiveness, generosity, altered judgment and absentmindedness may be present in differing degrees in different individualsand in the same individual at different times at a given blood-alcohol level. Clinical examinations generally reveal no other signs of impairment. Blood-alcohol levels could reach 0,15g%. Subjectively the first noticeable changes may be difficulty in visual accommodation and hearing, especially when these functions are also impaired by disease or the ageing process. The first movements to become visibly impaired are those requiring the greatest skill.

Clinical examination generally reveals evidence of faculty impairment. The mood becomes less self-critical, and behavioural changes, less tempered by reason, tend to be accentuated and often accompanied by impulsive acts. The person is more reckless but sometimes also more cautious. Unsteadiness when standing, turning and walking may be present in varying degrees. Nystagmus (an involuntary rapid movement of the eyeball) is usually present. The face is often flushed and the eyes bloodshot. Blood-alcohol levels could reach 0,25g%, but generally range between 0,10 and 0,20g%.

It is easy to detect functional impairment with this degree of intoxication. Many aspects of behaviour are generally beyond self-control and self-evaluation. The mind is dull and impairment of most faculties is obvious. The faculties controlling the close co-ordination needed for walking and other voluntary motor actions are markedly impaired. Staggering, slurred and thick speech, the quality of which is shallow, confused and illogical, is present. Movements are clumsy. Distance and position are misjudged. The subject may attempt to conceal this impairment by performing tasks more slowly. Pain and other sensations are dulled. Reflexes as tested clinically are depressed and reaction time prolonged. The pupils become dilated and react sluggishly to light. Co-ordination of eye movement is impaired. Balance is impaired. Heart rate can increase. If nausea or vomiting is present, the subject could be pale. Although intoxication is obvious to the observer, the cause may (as in all degrees of intoxication) be difficult to determine. Blood-alcohol levels of up to 0,30g% and very occasionally even higher are found.

There are confusion and disorientation with regard to both time and place, apathy, drowsiness and marked disruption of both motor and functional co-ordination. Confusion, disorientation and supressed sensibility, particularly when accompanied by nausea and vomiting, could mask or resemble underlying organic pathology. Blood-alcohol levels even in excess of 0,35g% are found.

It can be very difficult to determine the cause of the stupor or coma. Unconsciousness, slow respiration, weak cardiac action and dilated pupils with marked depression of all reflex reactions may be caused by many different intoxicants and a great variety of diseases. Blood-alcohol levels of up to 0,45g% and on rare occasions even higher may be found.

In habitual drinkers the behavioural disturbances will be less marked at all blood-alcohol levels, although it is said that the alcoholic is no less susceptible than the non-alcoholic to potentially lethal blood-alcohol levels. The well-known phenomenon of a hangover (headache, fatigue and dizziness) can be caused by the alcohol or acetaldehyde or both or by substances formed during the fermentation process. It has also been suggested that most of the symptoms of a hangover can be the result of hypoglycaemia. Blood-glucose levels are generally lower in both the normal alcohol-naõÈve and the chronic alcoholic, but true hypoglycaemia is rarely found the morning after.

In a recent study no correlation was found between the impairment of psychomotor skills necessary for driving and the intensity of the hangover, although irritability caused by the hangover could lead to carelessness. Drugs, such as codeine compounds, taken to relieve the symptoms of the hangover, could affect driving skill due to their psychoactive effect. 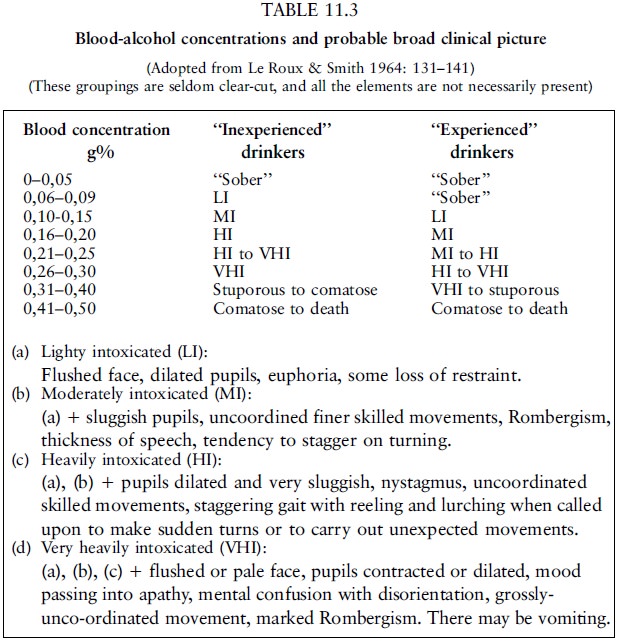