Carbon monoxide (CO) is formed during the incomplete oxidation or combustion of carbon-containing material (ie organic material). During combustion of carbon-containing material in the presence of sufficient oxygen (O2), each carbon atom will bind with two oxygen atoms to form carbon dioxide (CO2). If sufficient oxygen atoms are not available, every carbon atom will only bind with one oxygen atom. Carbon monoxide (CO) instead of carbon dioxide (CO2) will be produced.

Carbon monoxide is produced wherever incomplete oxidation of carbon occurs during combustion.

·              Household or domestic. Open fires in rooms or other shelters with an insufficient oxygen supply, such as warm-water gas cylinders or fires in enclosed spaces.

·              Transport. Transport vehicles produce CO. Petrol engines produce more carbon monoxide than diesel engines. CO production is also increased if the engine is not correctly tuned. It is alleged that a 1600cc engine in a closed garage will produce deadly levels within 5 minutes.

Carbon monoxide is a colourless, odourless and tasteless non-irritating gas. It is slightly lighter then air. The gas is absorbed via the lungs and has the following effects:

·              It has a direct suppressant effect on the brain, identical to an anaesthetic agent. This depresses respiration.

·              Carbon monoxide binds with the enzyme system in the cells involved with cell metabolism (cytochrome oxydase system) and this has a further detrimental effect, because the cells cannot use even the little oxygen which they still receive, and cytotoxic anoxia/hypoxia develops.

Underlying diseases, for instance heart disease, can make a person more susceptible to carbon monoxide poisoning. If the person already suffers from heart problems due to decreased blood flow through the coronary arteries, any drop in the oxygen content of the blood will predispose to ischaemia (myocardial infarction or heart attack). 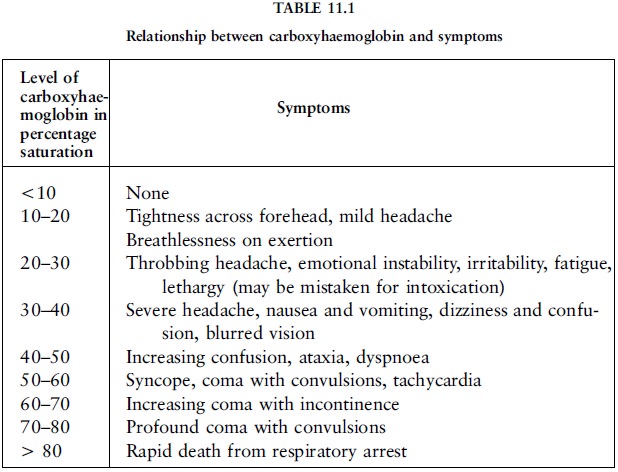 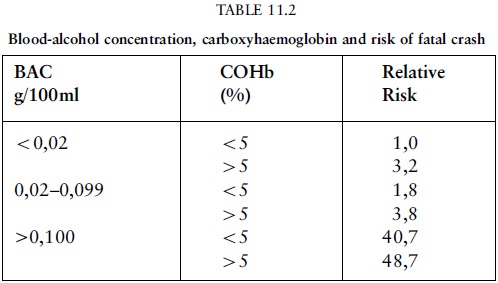 The majority of deaths due to carbon-monoxide poisoning is accidental or by suicide. It can of course also be the result of homicide, and this sometimes leads to litigation if negligence can be proved (faulty installation of heating systems, or industrial negligence).

Accidents can happen in the home, or they can be due to exposure to exhaust fumes. A few years ago some family members died due to carbon-monoxide exposure, when a tail-wind forced exhaust fumes into the half-open canopy of a pick-up truck. Aeroplanes, especially single-engine aircraft, may also develop leaks, which will allow the entry of carbon monoxide into the cabin. As already mentioned, a low atmospheric pressure will increase the effect of even low levels of carbon monoxide.

Carbon-monoxide poisoning as a mode of suicide is common.

The clinical presentation is determined by the tempo of exposure, the COHb level and previous illnesses (eg heart disease).

The effects of CO poisoning are usually not recognised by the victim himself. A state of lethargy and euphoria soon develops, and the subject will make no effort to remove himself from the noxious environment. This state is particularly significant for a vehicle driver, as the concentration of carbon monoxide can build up in the driving cabin from a leaking exhaust, or the carbon monoxide can be sucked into the vehicle through the air vents of a ventilating system, a situation that can readily arise during heavy traffic. Deterioration of the ability to identify tone and time intervals was noted after ten minutes exposure to 50 ppm (50 mg/:) in the environment.

At levels of 10% to 20% blood saturation, mild headache, breathlessness and confusion can occur (table 11.1). At levels of 20% and more, emotional instability, irritability, fatigue and marked lethargy, and at 30% severe headache, nausea, vomiting, dizziness, confusion, blurred vision, ataxia, tachycardia, nystagmus, Rombergism and a flushed face could be experienced and this can mistakenly be attributed to alcohol intoxication. On recovery from the poisoning there can be complete amnesia about the events at the time of the incident. (Ataxia is unco-ordinated muscle movement. Tachycardia is an excessively rapid heart-beat. Nystagmus is an involuntary rapid movement of the eyeball. Rombergism is the tendency to sway when closing the eyes while standing still with the feet close together.)

The rate of the build-up of carboxyhaemoglobin levels will affect the gravity of the symptoms. The more rapid the saturation, the more intense the symptoms will be at a given level. If other gases are also involved, the haemoglobin levels could be far lower than anticipated from the clinical signs, and if there is severe anaemia, cardiovascular disorders and alcohol involvement, the effects may be more marked than the case of a healthy person. Even at very low levels of carboxyhaemoglobin (3%) people with coronary artery disease reveal electrocardiographic changes, and anginal pain can arise sooner with mild exercise.

If there is alcohol involvement the risk increases. Some motor accidents are due to the combined action of alcohol and CO on the driver (the source of the latter being faulty exhausts) (table 11.2).

To make a finding of carbon monoxide poisoning there must be evidence of an abnormally high carboxyhaemoglobin or COHb level. Any blood sample (arterial or venous) can be used, even a bloody fluid, as the percentage of haemoglobin bound to the carbon monoxide (COHb) has to be determined. A COHb of more than 5% in nonsmokers and more than 10% in smokers is significant. As decomposition may affect COHb levels, the specimen must be preserved with sodium fluoride and potassium oxalate. This is the same preservative used for alcohol analysis, and the sodium fluoride is an enzyme inhibitor which suppresses the production of carbon monoxide after the collection of the specimen. As mentioned, other diseases, for instance pre-existing anaemia or heart disease, as well as alcohol, have a negative effect.

The body has a characteristic cherry-red appearance due to (even only through one oxygen atom) the oxygenised state of the haemoglobin. The muscles are also cherry-red as the process also involves the myoglobin in the muscles. In individuals surviving for a period of time, damage to the brain and heart will be evident.

A man and his wife made a suicide pact. They drove to the appointed place and connected the exhaust of the car to a hosepipe so that the fumes could flow into the car. Prior to leaving for the scene the husband had consumed half a bottle of brandy  -   this was approximately two hours before the estimated time of his death. The following day the husband's body was found slumped in the front passenger seat of the car. The driver's door was wide open. The evening of the following day the wife phoned the police from a hotel some 30 km from the suicide scene. On the same day their dog was found wandering aimlessly about in the bush, and obviously blind (probably the consequence of carbon-monoxide poisoning). The wife made a statement to the effect that she and her husband had got into the car, he in the driver's seat and she in the passenger seat. Their dog was asleep on the back seat. Shortly after starting the car her husband asked her to move into the driver's seat as he felt too drowsy to keep his foot on the accelerator pedal. This she did. She had no further recollection of events up to the time she remembered entering the hotel from where she had phoned the police.

A post-mortem examination of the husband's body revealed that his blood contained 75% carboxyhaemoglobin. His blood-alcohol concentration was 0,25g%. The alcohol probably caused the initial drowsiness and made him more susceptible to the effects of the carbon monoxide. The wife, in a state of confusion, probably managed to open the door on her side and fell out of the car, and at that time the dog must have escaped.