The body is exposed to many pathogenic microorganisms and multicellular parasites. Most microorganisms found associated with the body are harmless and live as commensals or symbionts but others cause disease and are known as pathogens.

The body is exposed to many pathogenic microorganisms and multicellular parasites. Most microorganisms found associated with the body are harmless and live as commensals or symbionts but others cause disease and are known as pathogens. Infection, from the Latin ‘inficere’ (to put in), is the successful persistence and/or multiplication of the pathogen on or within the host. In this respect, pathogenesis may be defined as the molecular and biochemical mechanisms that allow pathogens to cause diseases. Mummies preserved in ancient Egypt and elsewhere display evidence that infectious diseases have always been a threat. The emergence of new pathogens and the development of resistance to current treatments for existing pathogens means that infectious diseases will probably always be with us.

Many antibiotic drugs are available to treat infectious diseases and, in many cases, will effect a cure. It is, however, possible for them to exacerbate the problem since the drug can remove commensals allowing antibiotic resistant pathogens to flourish. Also, an adequate immune response is often necessary, since drugs alone may fail to eliminate the infection. Thus all pathogens must overcome the defense systems present in their hosts .

Some pathogens regularly cause diseases while others do not. For example, Pseudomonas aeruginosa (Figure 2.1) can cause overwhelming disease inpatients whose defense systems are compromized but not in those with intact defenses. It is likely that any microorganism with the ability to live in or on humans will sometimes become an opportunistic pathogen especially if the balance between the usual microorganisms present and the immune system is disturbed. Thus bacteria which are normally harmless, but which are opportunistic pathogens, can cause infections under certain conditions. For example, wounds can become badly infected with bacteria that normally exist on the skin, and bacteria that normally live in the gut can cause serious infections if peritonitis allows the gut contents to enter the peritoneum. In general, these infections are not transferable to other healthy humans. 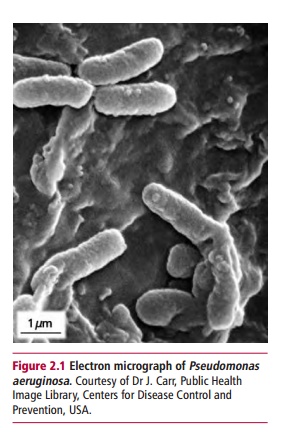 The success of pathogenic microorganisms depends on their ability to colonize host tissues and to counter the host’s defense mechanisms. Virulence is measured by the infective dose and the severity of the disease caused. For example, as few as 10 to 100 Shigella dysenteriae cells can cause shigellosis but more than 10 000 cells are needed of the less virulent salmonella or cholera bacteria. True pathogens are equipped with a range of virulence factors. The strains of some bacterial species, such as pathogenic forms of Escherichia coli (Figure 2.2) can produce different virulence factors that cause, for example, diarrhea, urinary tract infections or sepsis. Other strains, however, do not produce virulence factors or do so to a lesser extent and are therefore not pathogenic, except when they infect an immunocompromized host. 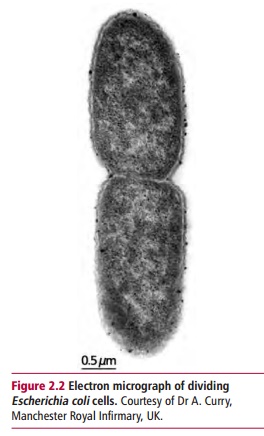 A pathogen must be transmitted from a source to the patient. Direct contact between hosts is the most obvious form of transmission but coughs and sneezes (aerosols), food, water and arthropod vectors are all used by various pathogens. The long-term survival of pathogenic microorganisms also depends on maintaining their infectivity during transmission from host to host. Diseases that are transmitted from animals to humans are called zoonoses, while humans who harbor a pathogen but are asymptomatic arecalled carriers.