Infectious diseases are caused by pathogens that have the ability to infect humans. They may be subcellular, such as prions and viruses, single-celled prokaryotic bacteria, single-celled eukaryotic protozoa and yeasts, or multicellular organisms such as, fungi, certain worms, such as nematodes and flukes (generally referred to as helminths) and arthropods, such as mites. The term parasite, an organism that lives at the expense of another, is often applied to viruses, protozoa and helminths, although the terms pathogen and parasite are virtually interchangeable.

Spongiform encephalopathies or prion diseases are all fatal diseases for which there is no cure. They include Creutzfeldt-Jacob disease (CJD), Gerstmann-Sträussler-Scheinker syndrome (GSS) and fatal familial insomnia (FFI). These diseases generally develop slowly over 10 to 20 years in older individuals. Prion diseases occur sporadically, or they can be familial, that is genetic, or they can be acquired, that is, infectious.

Prions are degenerate host proteins. The normal form of the protein adopts a largely α helical conformation that is harmless, but can refold to a β sheet-rich form that is a pathological conformation. Such misfolded proteins aggregate to form deposits in the brain leading to a lethal spongiform condition where holes develop in the brain. A misfolded prion protein, in some poorly understood way, induces a conformational change in a native α prion protein to produce a β type conformation. This new misfolded protein, in turn, can catalyze conformational changes in other native proteins, eventually forming a chain reaction and produces deposits of prions in the brain. The sporadic form of the disease occurs in individuals with mutations in the prion gene that predisposes them to produce the misfolded form of the protein. Sincethe diseases usually only occur after reproductive life is over, they can run in families giving the familial form. If misfolded prions enter the body in the diet, they resist digestion. They may also enter by iatrogenic means, through surgery or blood transfusions for instance, and can initiate the infectious form of the disease.

Viruses are obligate intracellular parasites. They are complexes of proteins, which form a capsid, and nucleic acid (RNA or DNA), comprising their genome, that together form a viral particle or virion (Figure 2.3). Some viral particles also have a lipid membrane or envelope acquired when the viral particle leaves its host cell (Figures 1.4and 2.7). Viruses must enter a target or host cell to replicate. They bind to the target cell by attaching to specific proteins or carbohydrates on the cell’s surface (Figure 2.4). For example, the human immunodeficiency virus (HIV) attaches to a protein called CD4 found on the surfaces of certain T lymphocytes and macrophages of the immune system . Other examples of viruses and the cellular receptors to which they bind are shown in Table 2.1. 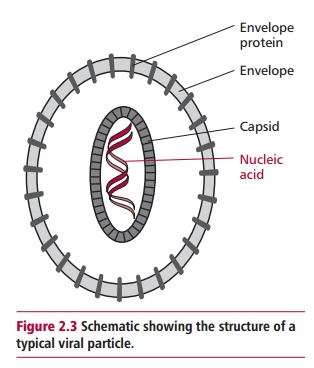 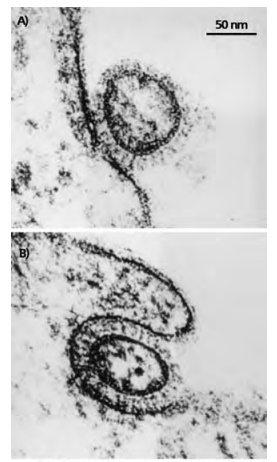 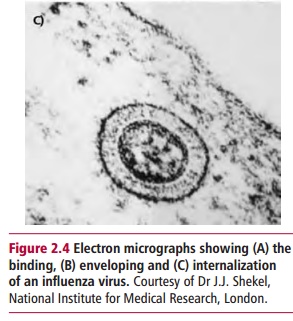 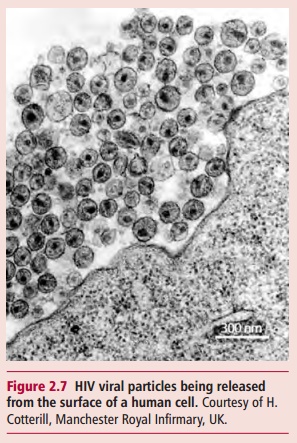 Once infected, the host cell then manufactures new viral particles. In some cases, replication may include an inactive latent state. For example, the virus Varicella zoster(Figure 2.5), which causes chicken pox, enters nerve cells and,after the initial infection, remains dormant. If, however, the host immune system becomes weakened,Varicella can reactivate and cause painful attacks of shingles in the area served by that nerve.

In some cases the viral nucleic acid can be integrated into that of the host and eventually lead to cell transformation and the formation of cancers . Thus, for example, hepatitis B virus can contribute to primary hepatocellular carcinoma, while certain strains of the human papillomavirus that cause genital warts may contribute to the development of cervical carcinoma.

Bacteria are cellular microorganisms that do not have a discrete nucleus and are described as prokaryotic (Figure 2.9). They are responsible for a large proportion of all infectious diseases and although prokaryotes share considerable biochemistry with eukaryotes, their metabolism differs in numerous ways, making them susceptible to chemical agents that do not significantly damage human cells. This is the basis of antibiotic therapy . While most species of pathogenic bacteria do not enter host cells and are described as extracellular pathogens, some significant groups of bacteria are intracellular parasites. Examples of the latter include Mycobacteria and Listeria. 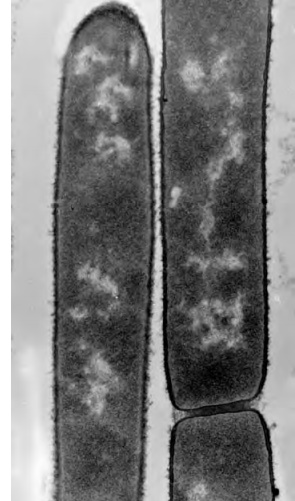 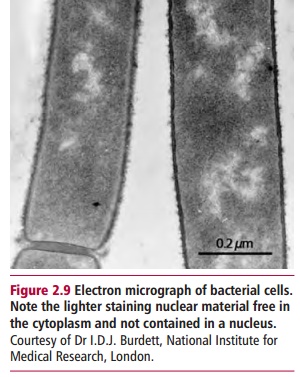 Protozoa, fungi and helminths are eukaryotic organisms. They therefore share many biochemical features with humans. Also, they have many seemingly sophisticated ways of countering the host immune system. This often makes them difficult to eradicate when they cause disease. Fungi, protozoa and helminth parasites are responsible for a large proportion of infective diseases, particularly in the developing world.

Protozoa consist of single eukaryotic cells although in some species these may group together as loose aggregates. Malaria, caused by species of Plasmodium, is easily the most clinically important protozoal infection worldwide and is responsible for many millions of deaths annually. Protozoa are, however, also the causative agents for a number of other infections including amebiasis, giardiasis, leishmaniasis, toxoplasmosis, trichomoniasis and trypanosomiasis. 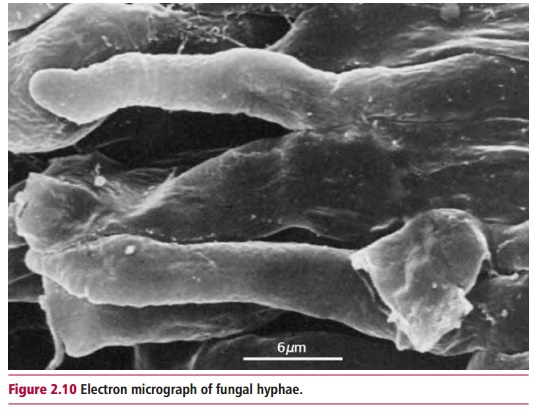 Fungi are a heterogeneous group of organisms, ranging from unicellular yeasts to elongated chains of cells, known as hyphae (Figure 2.10). Fungal infections, or mycoses, are relatively common and may be superficial or systemic. Fungi cause disease in humans by invading tissues, by being toxic or by initiating an allergic response. Clinically important fungal infections include those of Epidermophyton, Microsporum and Trichophyton species that cause ringworm, athlete’s foot and nail infections (Figure 2.11). Infections with yeasts and other fungi can result in, for example, candidiasis, 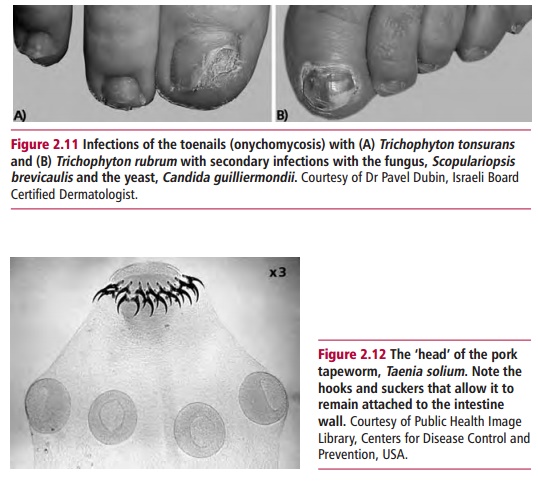 aspergillosis and cryptococcosis. Systemic fungal infections are, in general, much more common in immunocompromized individuals, for example those with AIDS , those undergoing cancer chemotherapy or those being treated with immunosuppressive drugs to prevent rejection of a transplant .

The clinically important helminths (worms) can be divided into three main groups: nematodes (roundworms), cestodes (flatworms) and trematodes (flukes). Helminths often have complex life cycles that may involve other hosts in addition to humans. In humans, they may infect the alimentary canal, blood vessels, lymphatics or other tissues such as skeletal muscle. Helminths are significant parasites in tropical climates. Examples of disease-causing helminths are the pork tapeworm Taenia solium(Figure 2.12) that can live in the gut and Schistosoma the cause of bilharzia.

Arthropods may be directly parasitic, but many are also relevant to infectious diseases as vectors of pathogens. The mite Sarcoptes scabiei lives in the outer layers of the skin and can cause scabies while fleas (Pulex) and head and pubic lice, Phthirus capitans and pubis respectively, are blood sucking parasites (Figure 2.13). Houseflies and cockroaches are noted carriers of food poisoning organisms. More specific vectors include ticks that transmit Borreliaburgdorferi, the cause of Lyme disease. Yersinia pestis, the bubonic plagueorganism is spread by the fleas on black rats. Malarial parasites are spread by female Anopheles mosquitos  and tsetse flies are vectors forTrypanosoma brucei which causes sleeping sickness. Several disease-causingorganisms use mammals as vectors with perhaps the best known being the rabies virus. 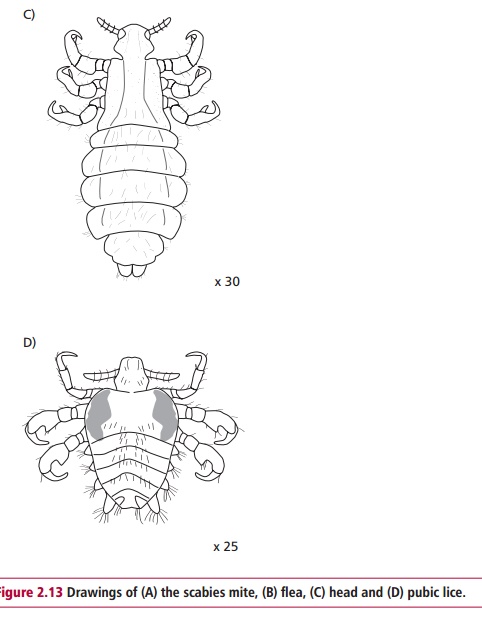