Evolution has provided pathogens and parasites with a wide range of factors that allow them to invade and colonize their host while at the same time avoiding and/or neutralizing host defense mechanisms.

Evolution has provided pathogens and parasites with a wide range of factors that allow them to invade and colonize their host while at the same time avoiding and/or neutralizing host defense mechanisms. Many virulence factors of pathogens have been identified; some are relatively nonspecific in action: some microorganisms, for example, possess specialized iron uptake systems. Microorganisms require iron for oxygen transport, mitochondrial energy metabolism, electron transport, the synthesis of nucleic acids and gene expression. However, although an essential element, iron is often only available in limited quantities and microorganisms that possess a variety of iron uptake systems are able to grow in regions of the host that would otherwise be expected to be sterile since little iron is available. Other virulence factors have rather more defined defensive or offensive actions.

Numerous pathogens evade the host’s defenses by producing slime layers or possessing polysaccharide capsules (Figure 2.15). Slime layers consist of exopolysaccharides (EPSs) that bind large quantities of water. Slime production is particularly important in bacteria that form biofilms since it forms a protective coat around the bacterial population. For example, the biofilm formed by the opportunistic Pseudomonas aeruginosa in the respiratory tract of cystic fibrosis patients protects it from the immune system and antibiotics. 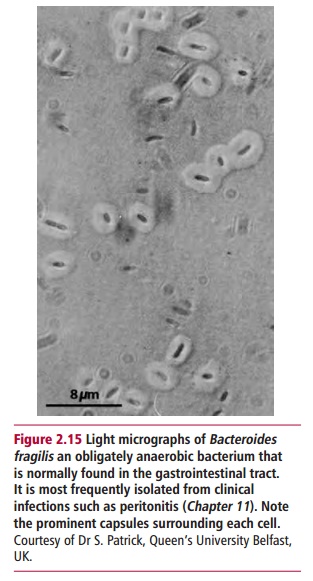 Capsules generally consist of a single polysaccharide structure that also binds considerable quantities of water and forms a protective layer around the bacterial cell. The polysaccharide is often negatively charged which renders it resistant to uptake by phagocytic cells. Capsules can also protect the bacterium from attack by the immune system . Some polysaccharide capsules are molecular mimics of host cell surface structures. The capsule of Escherichia coli K1 and the type B capsule of Neisseria meningitidis consistsof α -2, 8-N-acetylneuraminic acid residues. This is identical to neuraminic acid residues on the neuronal adhesion molecule N-CAM and other sialylated molecules of the nervous system. Consequently host immune systems do not recognize the bacteria as foreign and both pathogens can invade the CNS causing meningitis.

Other examples of molecular mimicry are the many proteins of pathogenic bacteria that are homologous to specific regions of host proteins. Yersinia induces the production of antibodies that cross-react with part of a particular variant of a host protein called HLA-B27. Cross-reactivity between other bacterial species and HLA-B27 is thought to be involved in the development of types of arthritis known as Reiter’s syndrome and ankylosing spondylitis.

Some bacteria directly or indirectly activate or suppress actions of the immune system by producing pathogenicity factors called modulins or microkines. The P fimbriae of the uropathogenic Escherichia coli, for example, induces an increase in the release of interleukin 4 (IL-4) by uroepithelial cells. Modulation of cytokine production may lead to increased pathogenicity .

A number of microorganisms prevent their hosts mounting an effective immune response by changing their surface antigens. This can occur in a number of ways. For example, several viruses, including influenza and HIV, have genes coding for surface proteins that mutate at relatively fast rates. This is referred to as hypermutability. Thus, the antigenic structure of these surface proteins is prone to change at intervals, leaving a population that is no longer immune to that virus. Other microorganisms that undergo antigenic variation include the trypanosome that causes sleeping sickness. These regularly change the structure of their surface glycoproteins during the course of an infection. The malarial parasites Plasmodium also express different surface antigens during the infection process. Some parasitic worms, for example, schistosomes, become coated with patient antigens, such as MHC molecules and common blood group antigens, and so avoid recognition by the host.

Bacterial offensive virulence factors include adhesins, invasins and toxins. Adhesins are proteins found on the surfaces of microbial cells that bind to specific sites on the cells of the host. The best studied are those in the pili of, for example, certain strains of Escherichia coli and Vibrio cholerae. Pili are fibers about 2 Mm long and 2 to 8 nm in diameter that extend from some bacterial cells (Figure 2.16). They consist of about 1000 protein molecules and include a type of adhesin that belongs to a group of biomolecules called lectins. These are glycoproteins that bind specifically to certain sugars or the glycosidic bonds found in some carbohydrates. In the case of Escherichia coli and Vibrio cholerae, these are mannose and fucose sugar residues respectively which may be found on the surfaces of host cells. 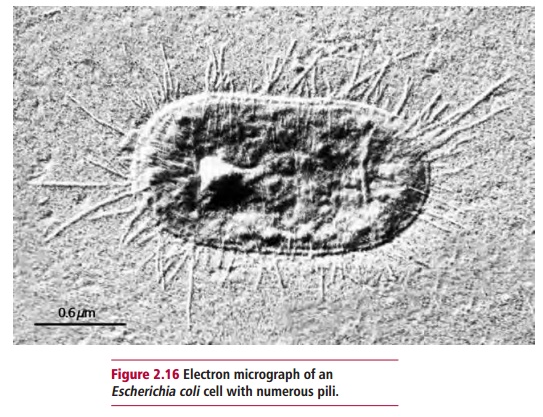 Invasins are also proteins. They allow pathogens that have bound to the host to be internalized, that is, enter the host cell preventing it from being removed by ciliary action or washing and ensuring that the pathogen is protected from direct immune attack. Once internalized, the microorganisms may remain in membrane-bound vesicles. Others escape into the cytosol and so avoid the killing mechanisms associated with phagocytosis. Some microorganisms are so adapted to intracellular life that they are unable to reproduce outside the host cell. These include species of Chlamydia, Rickettsia and some mycobacterial pathogens. These organisms aretherefore obligate intracellular parasites and may cause infectious diseases, for example, Chlamydia pneumoniae, Rickettsia typhi and Mycobacteriumleprae. However, others, such as strains of Listeriae, Salmonellae, Shigellaeand Yersiniae, are facultative and can live outside their host cells.

Pathogenic microorganisms produce different types of toxin. They can be classified into two types: cell-associated toxins, for example endotoxins, and those secreted by the bacterium called exotoxins.

Endotoxins are produced by bacteria with Gram-negative cell walls and are lipopolysaccharides embedded in the outer membrane of the cell walls of Gram-negative bacteria. The toxic portion is called lipid A and the damage it causes varies with the susceptibility of the host. Fever is common because endotoxins stimulate host cells to release cytokines that affect the thermoregulatory center of the hypothalamus. In serious cases, endotoxic shock can result.

Exotoxins are proteins secreted by both Gram-positive and negative bacteria. They may be subdivided into three groups: those that damage membranes, those with specific host targets and superantigens.

Exotoxins that damage membranes cause the cell to lose water and ions, disrupting ion gradients across the membrane. In high doses cell lysis occurs, hence they are sometimes called hemolysins or cytolysins. A clinically significant feature of such toxins in an infection is their antiphagocytic activity. Some of the hemolysins and cytolysins of bacteria, such as Staphylococcusaureus, Streptococcus pyogenes and Bordetella pertussis are polypeptidesthat aggregate in the membranes of host cells forming pores. Thiol-activated lysins are predominantly produced by Gram-positive bacteria. These toxins are proteins that contain a large number of cysteine residues. They bind to cholesterol molecules in the membranes of target cells in oligomers of 25 to 100 toxin molecules. These form large toxin-lined aqueous pores in the membrane that constitute the lesions of membrane damage.

Phospholipases catalyze the hydrolysis of phospholipids in the membranes of host cells. For example, the α toxin of Clostridium perfringens (Figure 2.17) is a phospholipase C which catalyzes the following reaction:

Similarly, the β hemolysin of Staphylococcus aureus is a sphingomyelinase C that catalyzes the following reaction: 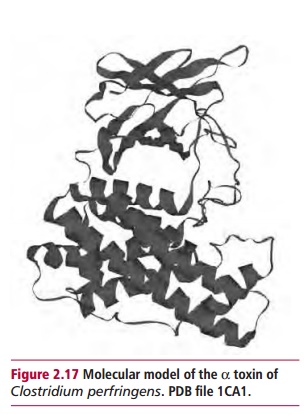 The degradation of membrane lipids, naturally, results in a loss of membrane integrity and function. Exotoxins that target specific sites in the host do so in a wide variety of ways, for example, they may act on cells to deregulate or kill them or they may have an extracellular target. Gram-negative bacteria, such as Enterobacteriaceae (Escherichia coli, Citrobacter freundii, Yersiniaenterocolitica), secrete heat-stable enterotoxins as small as Mr2000 (Figure 2.18). These toxins bind to specific receptors that are part of a cyclic GMP-dependent signal transduction system of enterocytes in the upper intestinal epithelium. This system regulates the concentration of intracellular cyclic GMP that, in turn, is involved in the activation of intracellular enzymes, for example, protein kinase G . The binding of the toxins interrupts the secretion of Na+ and Cl– and this results in a watery diarrhea. 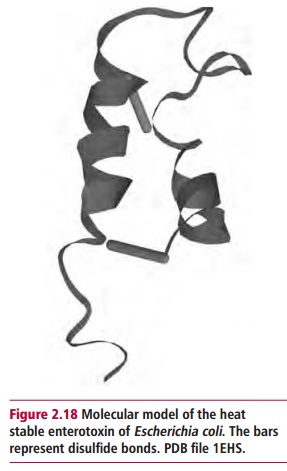 A number of exotoxins consist of two dissimilar polypeptides usually referred to as the A and B subunits. The B subunit recognizes and binds to specific target cells and facilitates entry of the A subunit which has an intracellular toxicity. The tetanus and botulinum toxins are Zn-dependent proteases (Figure 2.19) that act as neurotoxins. They catalyze the hydrolysis of synaptobrevin 2, a protein involved in docking and fusion of vesicles containing neurotransmitters. Thus their actions inhibit the release of neurotransmitters. Following its internalization into neurons of the CNS, the tetanus A subunit, tetanospasmin, migrates to peripheral nerve endings by retrograde axonal transport. Here it is released by postsynaptic dendrites and diffuses to the presynaptic neurons where its action prevents the release of the inhibitory neurotransmitters, γ -aminobutyric acid and glycine. This leads to unchecked excitatory impulses with a continuous stimulation of muscles and spastic paralysis. In contrast, botulinum toxin is absorbed from the gastrointestinal tract and is transported to susceptible neuromuscular and peripheral autonomic synapses where it inhibits the release of acetylcholine, causing flaccid paralysis. 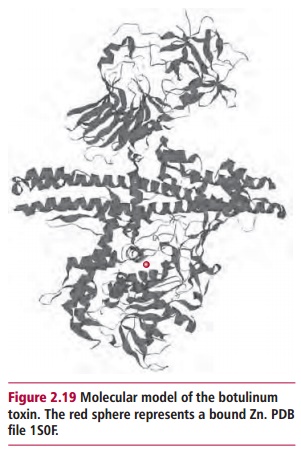 Some exotoxins are ADP ribosyl transferases. The cholera, pertussis and diphtheria toxins (Figure 2.20) use NAD+ as a donor substrate so that the ADP ribosyl portion of NAD+ is transferred to the target protein releasing nicotinamide. Cholera and pertussis toxins attack G proteins and interfere with signal transduction so that receptor-mediated signal transduction pathways are activated or inhibited . 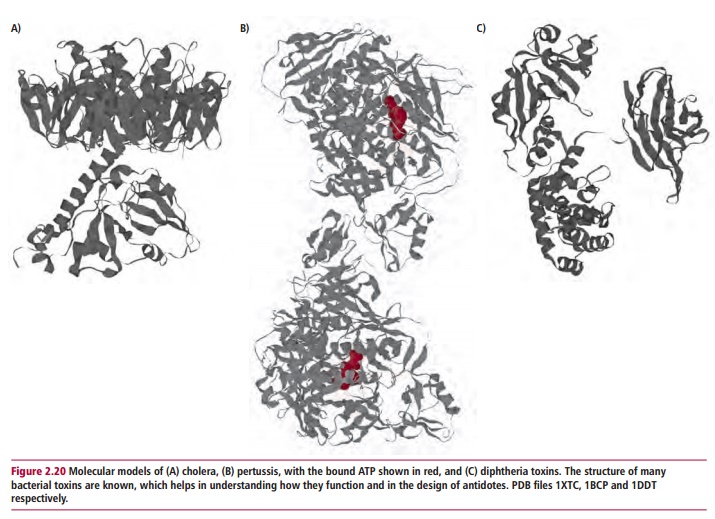 ADP ribosylation by cholera toxin fixes the G α protein in its active form. This leads, in turn, to a long-lasting activation of adenylate cyclase and synthesis of cyclic AMP and activation of protein kinase A. The net result is a long-lived opening of the chloride channel of the cystic fibrosis transmembrane conductance regulator, that increases secretion of hydrogen carbonate (HCO3–) and Cl– into the intestinal lumen but which inhibits the absorption of Na+ and Cl–. The resulting osmotic effect causes a massive leakage of intracellular water into the intestinal lumen and subsequent diarrhea. This is called fulminant cholera.

Diphtheria toxin kills cells by blocking protein synthesis. The target of the toxin is a single protein, elongation factor EF2, involved in protein synthesis. Its activities are inhibited by ADP ribosylation. The Shiga family of toxins produced by Shigella dysenteriae and Escherichia coli (Figure 2.21) also inhibit protein synthesis but by a different mechanism. They are N glycosidases that hydrolyze an N-glycosidic bond between specific adenine and ribose residues of the 28S ribosomal RNA of the 60S ribosomal subunit. 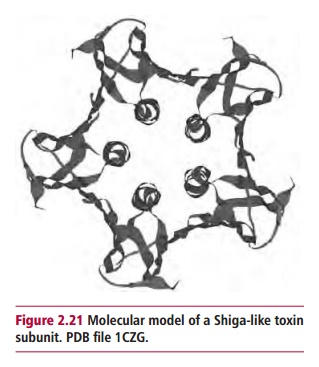 Microorganisms secrete a number of toxins that are enzymes which degrade components of the connective tissues. Staphylococci and Streptococci secrete enzymes that degrade the extracellular matrix allowing them to invade and colonize tissues. Clostridium perfringens secretes a variety of carbohydrases and proteases that degrade connective tissues, allowing it to colonize and spread through subcutaneous tissues. If the bacteria invade the deeper muscles tissue they may cause necrosis and gas production from anaerobic fermentations (gas gangrene). This type of infection is extremely painful and can spread rapidly. Much of the direct damage is caused by the αtoxin described above. Other pathogens secrete proteases that hydrolyze specific components of the immune defense, such as IgA or enzymes that detoxify catalases and superoxidase dismutases (SODs) that are used by some immune cells to kill microbial pathogens .

Superantigens are polypeptides synthesized by Gram-positive pathogens, such as some strains of Staphylococcus aureus and Streptococcus pyogenes. They are extremely effective and potent stimulators of the immune system because of their unique ability to stimulate large numbers of its cells simultaneously. This leads to a massive release of molecules called cytokines that activate numerous physiological systems, such as the temperature regulatory system. The superantigen of Streptococcus pyogenes is responsible for streptococcal toxic shock syndrome (STSS). The fever, shock and tissue damage associated with STSS is thought to be the result of an overproduction of the cytokines Tumor Necrosis Factor α, Interleukin 1 β and Interleukin 6. The superantigen of Staphylococcus aureus, toxic shock syndrome toxin 1 (Figure 2.22) causes symptoms that can lead to a rapid failure of many body organs. 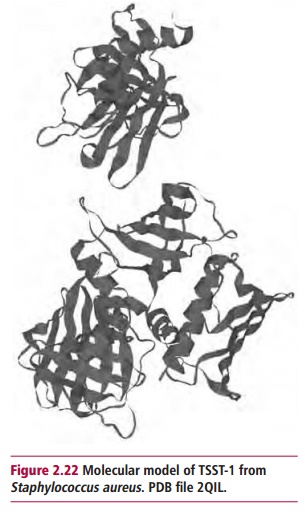