Diphtheria is a classic example of toxin-mediated bacterial disease.

Diphtheria is a classic example of toxin-mediated bacterial disease.

Diphtheria toxin, the exotoxin produced by C. diphtheriae, is the key virulence factor of the bacteria (Table 27-3).

Diphtheria toxin: Diphtheria toxin is produced only by strainsof C. diphtheriae that are lysogenized with bacteriophages that contain the structural gene (tox gene) for the toxin molecule (tox1 strains). When DNA of the phage becomes integrated into the genetic material of C. diphtheriae, the bacteria develop the capability of producing the polypeptide toxin. The gene for toxin production occurs on the chromosome of the prophage, but a bacterial repressor protein controls the expression of this gene. The repressor is activated by iron, and it is in this way that iron influences toxin production. High yields of toxin are synthesized only by lysogenic bacteria under conditions of iron deficiency.

C. diphtheriae usually enters the body through the upper respiratorytract but can also enter through the skin, genital tract, or eye. Infection begins by adherence of the bacteria at the infected site. The initial lesion usually occurs on the tonsils and oropharynx, and from this site it may spread to the nasopharynx, larynx, and trachea. The organisms multiply rapidly in the epithelial cells, forming a local lesion and secrete exotoxins that cause necrosis of the cells in that area. The combination of cell debris and exudative inflammatory response (leading to accumulation of red blood cells, necrosed cells, bacteria, fibrin, and lymphocytes) result in the formation of the characteristic pseudomembrane. The pseu-domembrane of diphtheria is thick, leathery, grayish-blue or white. The membrane adheres very tenaciously to the underly-ing mucosa and if attempts are made to forcibly remove it, raw bleeding surface is exposed. Spreading of the membrane down the bronchial tree can occur, causing respiratory tract obstruction and dyspnea. 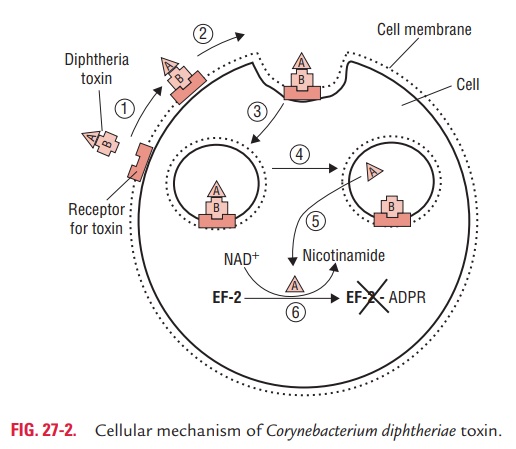 Growth of C. diphtheriae is restricted to oral cavity, but toxemia and systemic manifestation of diphtheria occurs due to absorption of toxin from the site of membrane. The toxin binds to a specific receptor (now known as the HB-EGF receptor) present on susceptible cells and enters by receptor-mediated endocytosis (Fig. 27-2). Apparently as a result of activity on the endosomal membrane, the A subunit is cleaved and released from the B subunit. Fragment A then gains entry into the cell and catalyzes ADP ribosylation. This leads to the inhibition of the NAD in protein synthesis. Ultimately, inac-tivation of all the host cell EF-2 molecules causes cell death, which clinically manifests as the necrotic lesion of diphtheria. Diphtheria toxin:

·           Is also absorbed into the blood stream and distributed, resulting in systemic complications of diphtheria including demyelinating peripheral neuritis and myocarditis.

C. diphtheriae does not cause any invasion of the blood to pro-duce systemic manifestation of the diphtheria.

In diphtheria, immunity against clinical diseases depends on the presence of antitoxin in the blood stream, in response to clinical or subclinical disease or active immunization. Infants below 6 months of age carry IgG antibodies derived from the immune mother either transplacentally or through breast-feeding. The antibodies later developed are IgG and IgA type. In areas where diphtheria is endemic and mass immunization is not practiced, most young children are highly susceptible to infection.

Individuals who have fully recovered from diphtheria may con-tinue to harbor the organisms in the throat or nose for weeks or even months. In the past, it was mainly through such healthy car-riers that the disease was spread, and toxigenic bacteria were main-tained in the population. The immune status of the individuals is assessed by the presence of antitoxin levels or by Schick’s test.

Schick’s test: Schick’s test was introduced by Schick in 1913to assess the immunity among children. The test is performed by injecting 0.1 mL of highly purified toxin (1/50 minimum lethal dose) into one forearm and 0.1 mL of heat-inactivated toxin into another forearm as a control. This brings about four types of reactions: (a) positive reaction, (b) negative reaction, (c) pseudoimmunereaction, and (d) combined reaction.

1.        Positive reaction: This is characterized by a local inflam-matory reaction that reaches maximum intensity in 4–7 days in the test arm and then reduces gradually. This indi-cates absence of immunity to C. diphtheriae.

2.        Negative reaction: Absence of any inflammatory reac-tion is suggestive of a negative reaction. This indicates the presence of antitoxin in the individual, which neutralizes the      toxin     injected.Such an individual is  immune to C. diphtheriae infection.

3.        Pseudoimmunereaction: In endemic areas, allergy to thetoxin is seen among children and adults. Even though the individual is immune, yet an allergic reaction is observed in both the test as well as the control arm. The inflamma-tory reaction reaches its peak in 36 hours and subsides in 72 hours in both the arms. This reaction is called pseu-doimmune reaction and it indicates that the individual isimmune but hypersensitive.

4.        Combined reaction: This is the condition in which anindividual injected with the toxin develops inflamma-tion in the test arm, which increases in intensity by 4–7 days. In the control arm, the inflammation is seen for a maximum of 48–72 hours and then subsidies. It indicates the individual is not immune and is hypersensitive.