Corynebacterium diphtheria: Properties of the Bacteria

C. diphtheriae is the most important species causing diphtheria.Diphtheria is an acute upper respiratory tract illness character-ized by sore throat, low-grade fever, and an adherent membrane on the tonsil(s), pharynx, and/or nose.

C. diphtheriae is the most important species causing diphtheria.Diphtheria is an acute upper respiratory tract illness character-ized by sore throat, low-grade fever, and an adherent membrane on the tonsil(s), pharynx, and/or nose.

·           The bacteria characteristically appear in palisades or as indi-vidual cells lying as sharp angles to each other in V and L formation. This Chinese letter pattern formation or cuneiformarrangement is caused by the incomplete separation of thedaughter cells during division when the organism is grown on nutritionally inadequate media, such as coagulated egg medium or Loeffler’s coagulated serum.

·           The granules are also known as metachromatic granules, Babe-Ernest’s granules, or volutin granules. These granules, which arethe accumulation of polymerized phosphates, are respon-sible for the beaded appearance of the bacteria. The granules can be demonstrated by special staining techniques, such as Albert stain, Neisser stain, and Ponder stain.

C. diphtheriae is an aerobic and facultative anaerobic organismbut grows best under aerobic conditions. It grows at 37°C and at a pH of 7.2–7.4 on media enriched with blood, serum, or egg.

2.   MacLeod’s or Hoyle’s tellurite blood agar media arethe examples of selective media used for the culture of diphtheriae. Tellurite (0.04%) present in the media inhibitsgrowth of other contaminant bacteria. Most strains of the bacteria require nicotinic and pantothenic acids for their growth; some also require thiamine, biotin, or pimelic acid. For the optimal production of diphtheria toxin, it is essential to supplement the medium with amino acids and a source of iron. On the tellurite agar, C. diphtheriae produces character-istic gray or black colored colonies after 48 hours of incuba-tion (Fig. 27-1, Color Photo 23). C. diphtheriae reduces tellurite to metallic tellurium, which is incorporated in the colonies, thereby giving them a characteristic gray or black color. 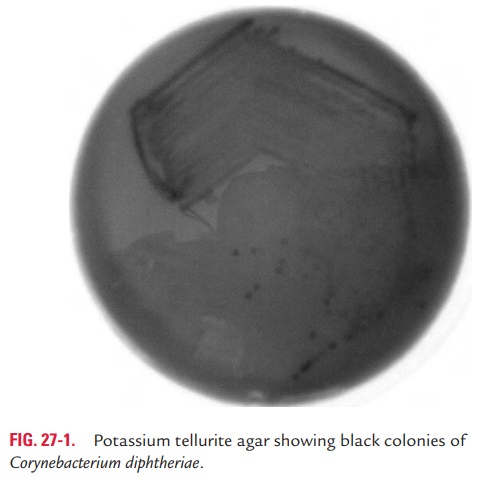 C. diphtheriae is classified into three distinct biotypes (mitis,intermedius, and gravis) based on the colony morphologies on cysteine-tellurite agar (Table 27-2):

o    Mitis colonies are small, round, convex, and black. 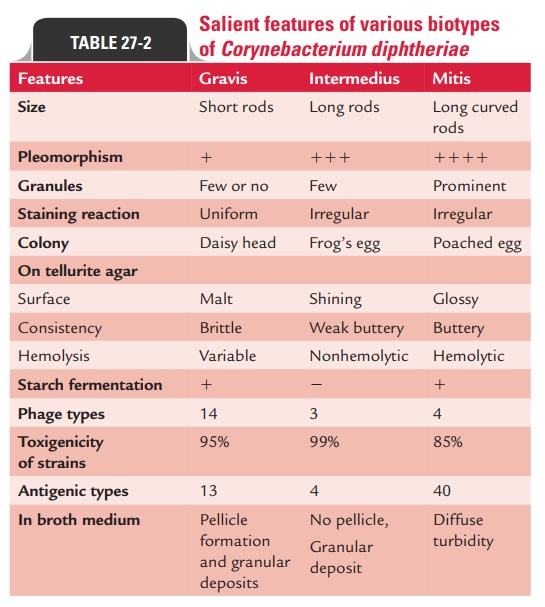 These morphological types of the strains were initially corre-lated with severity of the disease. Mitis strains were thought to produce mildest variety, gravis to produce the most serious disease, while the intermedius to produce the disease of inter-mediate severity, but now these distinctions are not considered valid. These morphological types, however, are useful for the epidemiological classification of C. diphtheriae isolates.

·           The bacteria do not ferment lactose, mannitol, and sucrose. Some strains of virulent C. diphtheriae ferment sucrose. They do not hydrolyze urea or form phosphatase and they lack proteolytic activity.

Susceptibility to physical and chemical agents: Diphtheriabacilli are readily killed by heating at 58°C for 10 minutes and at 100°C for 1 minute. They are destroyed by the usual strengths of antiseptics. They are resistant to the action of  light, desiccation, and freezing. They remain fully virulent and viable in floor dusts and in blankets even for up to 5 weeks.