Initial treatment of diphtheria is based on the high clinical suspicion or the clinical diagnosis of the condition.

Initial treatment of diphtheria is based on the high clinical suspicion or the clinical diagnosis of the condition. Treatment is started without waiting for the result of the laboratory test because definitive results take as long as a week. Hence, laboratory diagnosis is carried out not for treatment of individual cases, but for the epidemiological purposes and for the initiation of control measures of the disease.

These include swabs from the nose, throat, pieces of pseu-domembrane, if possible even from beneath the membrane, biopsy tissue, etc. At least two swabs from the infected site are obtained. The first swab is used to make a direct smear and the other is used for the culture.

The specimens are collected as soon as possible when diphtheria is suspected, even if treatment with antibiotics has been started. These are then transported to the laboratory in a sterile empty container or in silica gel sachets for immediate processing.

Gram staining of the smear shows Gram-positive bacilli. Albert, Neisser, or Ponder stain of direct smears shows metachromatic granules (Fig. 27-3). However, diphtheria bacilli may not always be demonstrated in the smears, and also it may be difficult to differentiate the bacilli from those of commensal corynebac-teria frequently found in the throat. Hence, staining of the smears alone is not specific to C. diphtheriae. The smear exami-nation, however, is valuable to identify Vincent’s spirochetes and fusiform bacilli, the causative agents of Vincent’s angina. 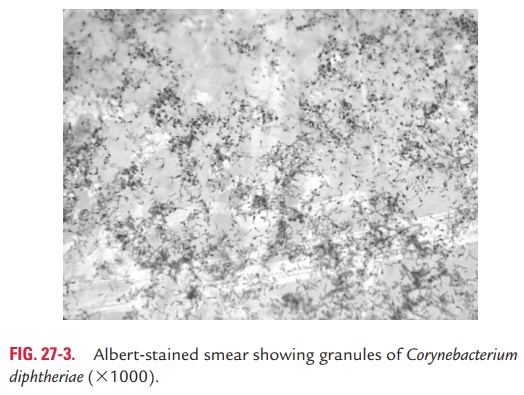 Tellurite medium is very useful for isolation of C. diphtheriae from contacts, carriers, and convalescents, in which clinical specimens contain a number of other bacteria. The bacteria on tellurite medium produce characteristic black to grayish black colored colonies after 48 hours of incubation.

On Loeffler’s serum slope, C. diphtheriae grows after 4–6 hours at 37°C producing small, circular, and white opaque colonies. If no colonies are seen, the medium is reincubated further for 24 hours.

The identifying features of C. diphtheriae colonies are summa-rized.

·           C. diphtheriae may be identified as mitis, intermedius, or gra-vis biotype on the basis of their (a) growth characteristics on tellurite medium, (b) carbohydrate fermentation patterns, and (c) hemolysis on sheep blood agar plates.

·           More recently, 16S ribosomal ribonucleic acid (rRNA) probes have been designed for the identification of genus and species of corynebacteria.

Subcutaneous test: In this test, growth from over night cultureof C. diphtheriae on Loeffler’s slope is emulsified in 2–4 mL broth. Two guinea pigs are injected subcutaneously with 0.8 mL of the emulsion. One of these is protected with 500 U of diphtheria antitoxin, which is injected intraperitoneally before 18–24 hours of the test. The other guinea pig is not protected. If the strain is virulent, the unprotected animal will die within 4 days, showing the typical findings. The protected guinea pig shall remain normal without showing any sign of toxemia.

Intradermal test: In this test, 0.2 mL of the emulsion obtainedfrom 18 hours’ growth of test bacteria cultured on Loeffler’s serum slope is injected intradermally into shaven sites of two albino guinea pigs (or rabbits), so that each animal receives 0.1 mL into two different sites. The control animal is given 500 U of antitoxin the previous day. The other is given 50 U of antitoxin intraperitoneally 4 hours after the skin test, in order to prevent death. Toxigenicity is indicated by an inflammatory reaction at the site of injection progressing to necrosis in 48–72 hours in the test animal, and there is no change in the control animal. This method is advantageous, since large number of strains can be tested simultaneously and also the animals do not die.

Elek’s gel precipitation test: The Elek’s test is an immuno-precipitation test for demonstration of biological activity of the toxin, initially described in 1949. It is an in vitro neutralization reaction between toxin and antitoxin. The test is performed on a Petri dish containing horse serum agar. A rectangular strip of filter paper impregnated with diphtheria antitoxin (1000 IU/mL) is placed across the medium before the medium is solidified. The strain of C. diphtheriae to be tested for toxicity is streaked on the medium at right angles to the filter paper strip. A known toxigenic strain of C. diphtheriae (positive controls) and nontoxigenic strain of C. diphtheriae(negative control) are also inoculated along with the test strain at right angles to the strip. The plate is incubated at 37°C for 24–48 hours. After incubation, the toxin produced by the growth of the test strain diffuses into the agar and meets the antitoxin at the optimal concentration, and the line of precipitation can be seen. In strains that are negative, no precipitin lines are seen.

Tissue culture test: Many eukaryotic cell lines (e.g., Africangreen monkey kidney, Chinese hamster ovary) are sensitive to diphtheria toxin, enabling in vitro tissue culture tests to be used for detection of toxin production. The toxigenicity of diphtheria bacilli is demonstrated by incorporating strains in agar overlay of cell culture monolayers. The toxin produced by the bacteria diffuses into the cells below and kills the cells in the monolayer.