C. perfringens produces more than 12 toxins and enzymes. Allthese are the virulence factors, which contribute to pathogen-esis of the diseases .

C. perfringens produces more than 12 toxins and enzymes. Allthese are the virulence factors, which contribute to pathogen-esis of the diseases (Table 29-2). 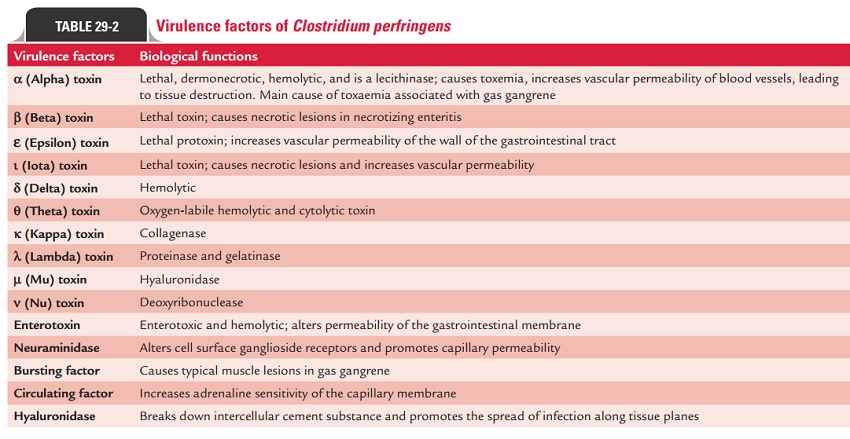 Alpha-toxin:It is the most important toxin produced by allstrains of C. perfringens. The largest volumes of alpha-toxin are provided by C. perfringens type A strain.

·           The alpha-toxin is a lecithinase, a phospholipase C, which in the presence of calcium and magnesium ions breaks down lecithin into phosphoryl choline and diglyceride.

·           The toxin is responsible for toxemia typically observed during gas gangrene.

·           It is lethal, dermonecrotic, and hemolytic. The alpha-toxin increases vascular permeability of blood vessels, thereby causing massive hemolysis and bleeding, tissue destruction, and myocardial dysfunction. The toxin lyses erythrocytes, leukocytes, platelets, and endothelial cells. The alpha-toxin causes hemolysis of red cells of most of the animal spe-cies except for goat and horse. The toxin is relatively heat stable and is partially inactivated by boiling for 5 minutes. The lysis of red cells is observed best on incubation at 37°C followed by reincubation at 4°C (hot–cold lysis).

Other major toxins:Beta-, epsilon-, and iota-toxin are the othermajor toxins in addition to the alpha-toxin; these toxins also play a major role in pathogenesis of the disease.

·           The epsilon-toxin is a protoxin, which is activated by tryp-sin. This toxin increases vascular permeability of the wall of gastrointestinal tract.

·           The iota-toxin is a lethal toxin, which produces necrotic lesions and increases vascular permeability.

Enterotoxin: Enterotoxin is produced primarily by type Astrain of C. perfringens. This is a heat-labile protein. The toxin is produced during the stage of sporulation of vegetative cells to form spores, which is stimulated by alkaline environment of the small intestine. The toxin binds specifically to receptors in the epithelium of the small intestine. This causes disruption in transport of ions in the ileum and jejunum and alters permeability of the membrane. The toxin is antigenic, but the specific antibodies against this toxin found in the serum are not protective.

C. perfringens produces many enzymes and many biologicallyactive soluble substances.

·           Neuraminidase is the most important enzyme, which alters cell surface ganglioside receptors and promotes capillary permeability.

·           Other soluble substances produced by C. perfringens include fibrinolysin, histamine, a “bursting factor”, and a “circula-tory factor”.

The “bursting factor” acts specifically on muscle tissue and may be responsible for typical muscle lesions observed in gas gangrene.

Mere presence of Clostridium species in wound does not cause gas gangrene. The course of infection after contamination of wound depends on (a) multiplication of the clostridia and (b) subsequent invasion of the tissue. Infection may progress through the following stages:

1. Simple wound contamination: The condition is associ-ated with no invasion of the underlying tissues or no produc-tion of toxins. Hence, there is only delayed healing of the lesion.

2. Cellulitis: In this condition, clostridia invade the fascialplanes and cause anaerobic cellulitis, with gas formation in the soft tissues. The bacteria produce minimal toxin and do not invade the muscle tissues.

3.        Gas gangrene or clostridial myonecrosis: Gas gangreneis a rapidly spreading edematous myonecrotic life-threatening condition caused by C. perfringens. The condition occurs in association with extensive muscle trauma contaminated with C. perfringens or other pathogenic clostridia. Gas gangrene israrely caused by a single Clostridium species, it is usually caused by multiple Clostridiumspecies (Table 29-1). The condition is commonly associated with anaerobic streptococci and faculta-tive anaerobes, such as staphylococci, Escherichia coli, and Proteus species. C. perfringens (predominantly type A) is the most com-mon species causing gas gangrene. Gas gangrene is caused by an inoculation of C. perfringens type A into tissues during trauma or surgery followed by replication of the bacteria and subsequent invasion of the tissues. Factors that contribute to the multiplication of C. perfringens and other anaerobic bacteria at the site of the wound are:

·           Low oxygen tension is the most important condition, which is most frequently seen in war wounds with implanted bul-lets or shell fragments, along with soil particles and bits of clothing.

·           Tearing of arteries and crushing of tissue cause anoxia of the muscles.

Extravasation of the blood reduces blood supply to the affected part still further, thereby causing more tissue anoxia. This con-tributes to a fall in the oxygen tension and pH of the damaged tissues.

Breakdown of carbohydrates and liberation of amino acids from the proteins inside the damaged and anoxic muscles also provides a suitable condition for the multiplication of anaer-obic bacteria. Clostridia multiply in large numbers and then produce abundant toxins, which cause further tissue damage.